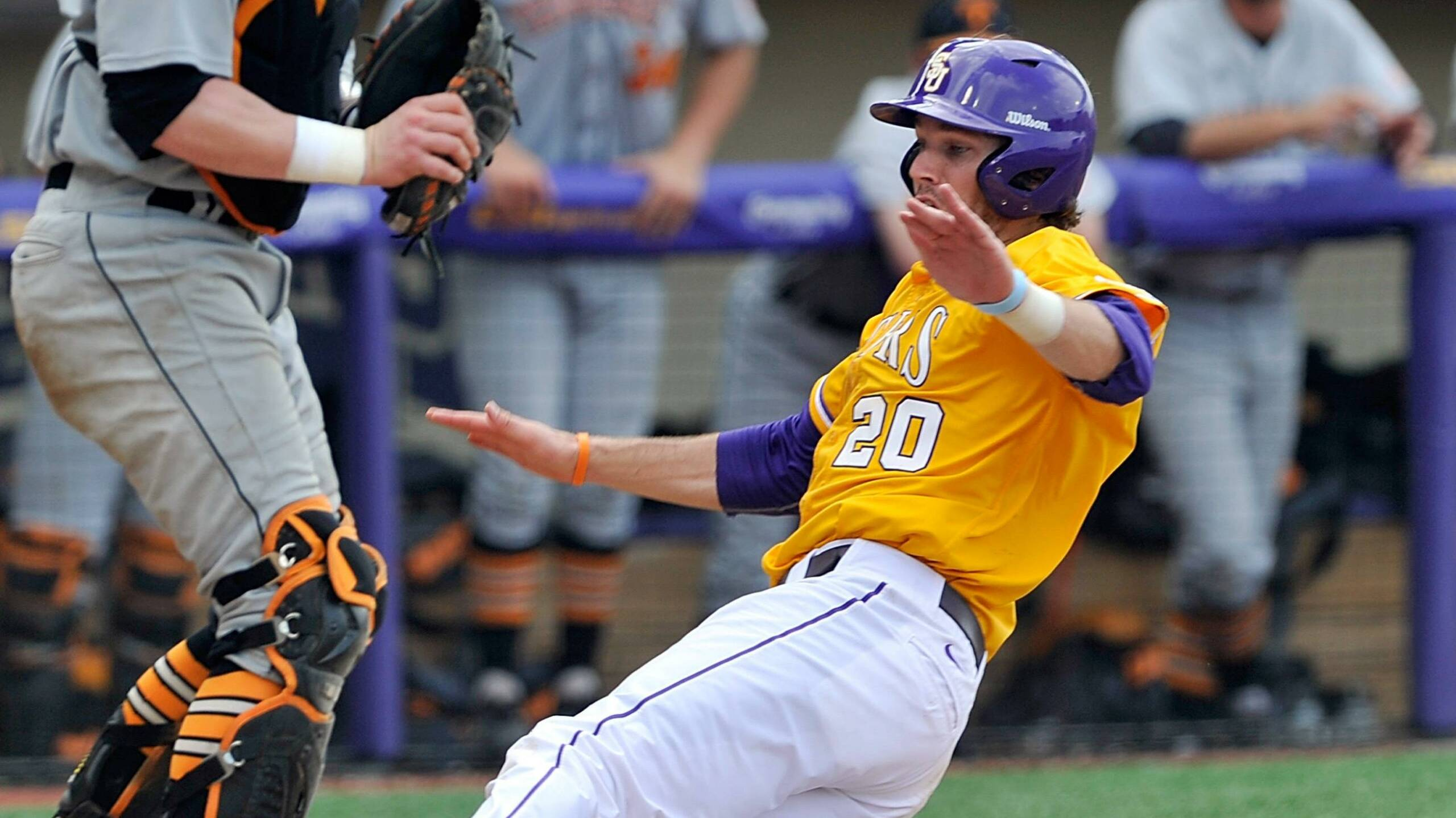 BATON ROUGE, La. — After Tennessee tied the game in the top of the eighth inning, sixth-ranked LSU erupted for five runs to post a 9-4 win on Sunday afternoon at Alex Box Stadium, Skip Bertman Field.

LSU returns to action on Tuesday at 6:30 p.m. against Alcorn State. The game will not be televised, but fans can listen to the game on the LSU Sports Radio Network (98.1 FM in Baton Rouge).

“This was an extremely hard-fought SEC series, and I’m very glad we played it at home,” said LSU coach Paul Mainieri. “Our fans gave us a lot of energy, and I thought our player were really locked it all weekend. (LSU pitching coach) Alan Dunn and I agreed that Tennessee was the best offensive team we’ve seen all season; their hitters are very disciplined and put a lot of pressure on our pitchers. Fortunately, we managed to piece it together today with seven pitchers and excellent defense, and we earned a very important series victory.”

LSU leftfielder Jake Fraley led off the eighth inning by reaching on a walk. With one out, second baseman Conner Hale notched his third RBI of the game, scoring Fraley from first. With runners on the corners, third baseman Christian Ibarra put down a squeeze bunt to plate Hale.

Tennessee grabbed a 1-0 lead in the second inning. First baseman Nathaniel Maggio led off the inning with a base hit to center field against LSU starter Alden Cartwright. After Maggio reached third on a sacrifice bunt and passed ball, second baseman Will Maddox plated Maggio on a sacrifice fly to center field.

LSU tied the game in the bottom of the second. DH Sean McMullen led off the inning with a double to left field. After McMullen moved to third on a ground out, Hale hit a sacrifice fly to score him.

The Volunteers regained the lead in the fourth inning on a two-out bloop single by rightfielder Derek Lance. The runner, third baseman Taylor Smart, was moving on the pitch and scored to give Tennessee a 2-1 advantage.

The Tigers took a 3-2 lead in the bottom of the fourth inning. With runners on second and third, Fraley hit a ground out to the right side of the field to score Bregman. Hale then collected an RBI on an infield single to plate McMullen.

In the fifth inning, LSU extended the lead to 4-2 when Laird scored on a wild pitch by Tennessee starting pitcher Nick Williams.

The Volunteers tied the game 4-4 in the eighth inning. Designated hitter Nick Senzel led off the inning with a double to left field. Senzel moved to third on an error by Fraley and ultimately scored on an infield single by centerfielder Vincent Jackson. Then with runners on the corners, catcher Tyler Schultz hit a sacrifice fly to center field to score Jackson.

Tennessee reliever Drake Owenby (2-2) was charged the loss after allowing two runs on one hit in the eighth inning.