by Will Stafford (@WillStaffordLSU)
Final Results Athletes of the Meet +0 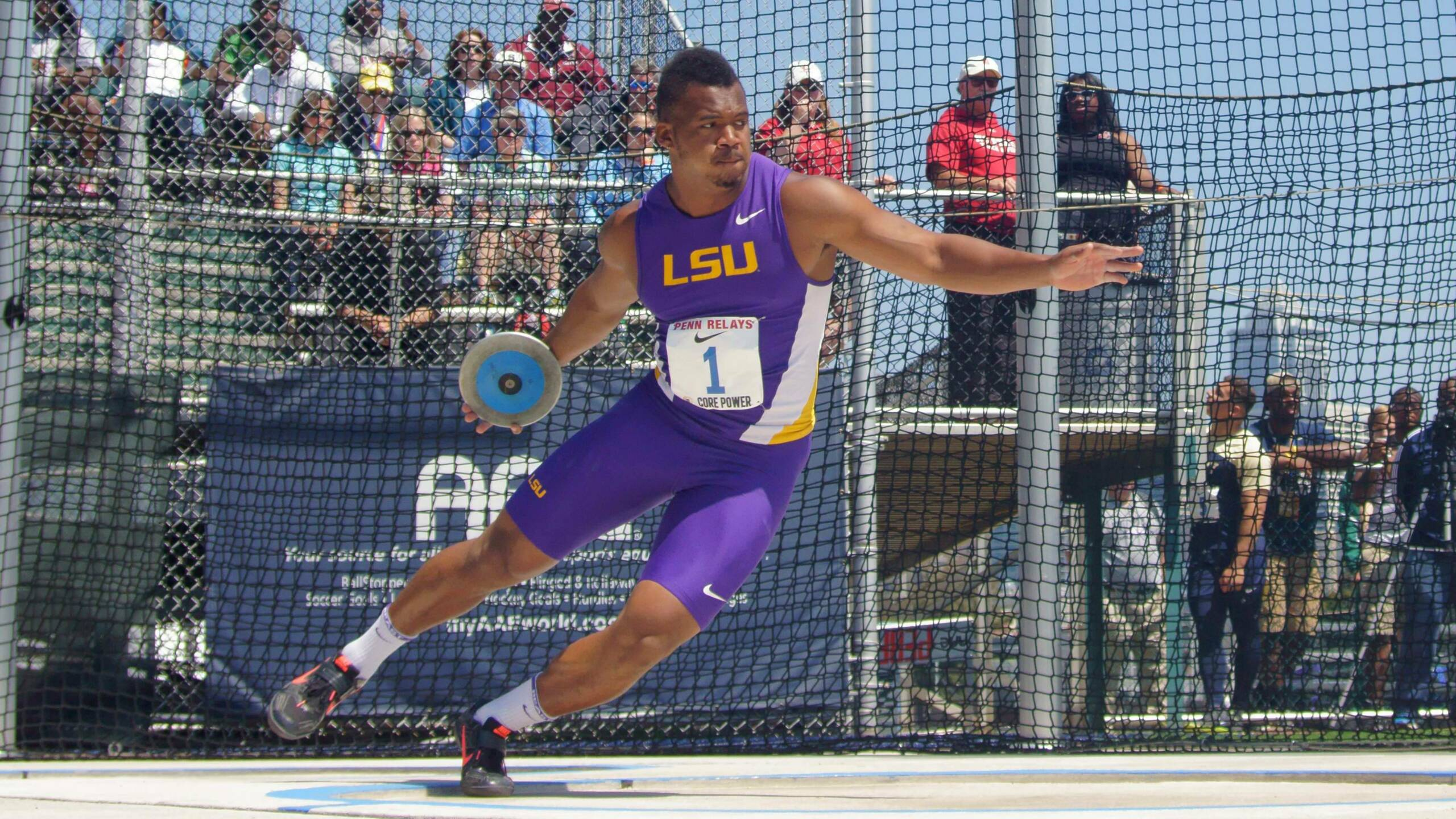 Brown grabbed the headlines with his record-setting victory as he was named the College Men’s Athlete of the Meet for Individual Events at this year’s Penn Relays for his performance.

Brown wasted no time as he unleashed a school-record and meet-record throw of 210 feet, 9 inches on his opening throw of the competition to emerge as the NCAA’s No. 2-ranked discus thrower in 2014 and solidify his reputation as a true title threat to UCLA’s defending national champion Julian Wruck. Brown now trails Wruck by just over two feet in the NCAA rankings as Wruck has thrown a best this spring of 213-3.

By opening the competition with his series-best of 210-9, Brown became just the second LSU Tiger in Penn Relays history to win the men’s championship discus throw, taking the title by more than 11 feet over Penn’s Sam Mattis with a runner-up throw of 199-8. Former Tiger All-America Alex Forst won back-to-back Penn Relays titles in the discus during the 1999 and 2000 seasons.

A native of Chappell Hill, Texas, Brown had threatened Nichols’ school record over the past two seasons after setting each of his last two personal bests at the Texas Relays. He moved to within three feet of the school record with a 2013 seasonal best of 206-3 set at the Texas Relays a year ago before raising his personal best by two inches with a mark of 206-5 during the meet earlier this spring.

Brown now sets his sights higher than the fourth-place finish he earned at the NCAA Championships a year ago when he earned his first career All-America honor with the Tigers in the discus throw.

“All I can say is, ‘Thank God!’” Brown said of breaking LSU’s school record. “I never wanted it to be like me chasing the record or anything. I knew it has been there for a couple of years now, but I never wanted to think about it too much. It’s just a relief for me now since I’ve got the record. I didn’t think it would be that far, honestly. The field here is really deceptive. I thought it might be for 60 or 61 (meters), but when they called out the mark over 64, I got pretty excited. It was tough to get myself back focused to take my next few throws after that.”

Brown’s two biggest throws of his career have both come on the first throw of a competition, as his previous best of 206-5 at this year’s Texas Relays also came in the opening round of throws. By posting a metric mark of 64.26 meters, Brown eclipses the “A” qualifying standard for the 2015 IAAF World Championships to be held in Beijing, China, next summer as the standard sits at 64.25m.

“Whenever I go into a meet, I always know my first throw is going to be nice and slow and I’m going to keep myself in the position I need to be in to complete the throw,” Brown said. “My first throws are usually what I need to get me into the finals. I’ve now got to work on being more consistent in the rest of my throws.”

Lady Tiger senior Jasmin Stowers made history of her own with a victory in the women’s college 100-meter hurdles as she became the first female hurdler in meet history to win the event three times in a career as she also won back-to-back sprint hurdle titles as a freshman in 2011 and as a sophomore in 2012.

Stowers, the reigning SEC Women’s Runner of the Week after racing to a wind-legal personal best of 12.81 seconds at the LSU Alumni Gold last weekend, took control of the race through the 60-meter mark and ended with an impressive time of 12.99 run into a headwind of -0.3 meters per second to break 13 seconds for the fourth time in her last five races in the 100 hurdles this season. Johnson C. Smith’s Danielle Williams clocked a time of 13.07 to finish runner-up to Stowers, while Texas’ Morgan Snow followed well back in third place with a time of 13.28.

She now stands alone in the history books as the only woman in meet history to win the women’s college 100-meter hurdles three times all-time at the world-famous Penn Relay Carnival.

“Whenever you can do something that nobody has ever done at a meet like the Penn Relays, it’s pretty special,” Stowers said after her award ceremony. “There are so many great hurdlers who have run here over the years, so it’s great to be the first to win it three times. It was a tough race today. We were running into the wind a little bit, but I stayed focused throughout the race and finished pretty strong.

“I feel like I’m starting to hit my stride at the right time of the season. I ran a PR last week, broke 13 seconds again this week, and am starting to put up those times each time I race. I know I’ve got a lot left in me, so I’m going to be working on running my best races in the coming meets. That’s what it’s going to take to win at SECs and NCAAs because it’s a very tough event this year.”

Brown and Stowers added two individual titles to the Tigers’ victory in the Championship of America sprint medley relay on Friday night for three event wins for the program during the 120th running of the Penn Relays this weekend. The Tigers and Lady Tigers have now combined for 68 Championship of America relay titles and 66 University in individual events in the meet’s storied history.

The Tigers came up a split-second short in adding to their Championship of America trophy haul while lining up in the finals of the 4×100-meter relay, 4×200-meter relay and 4×400-meter relay in Saturday’s finale.

They kicked off the afternoon with a second-place finish in the 4×100-meter relay final as their squad of sophomore Nethaneel Mitchell-Blake, junior Aaron Ernest, freshman Tremayne Acy and senior Shermund Allsop teamed to run a seasonal-best time of 38.83 to finish runner-up to the winning performance of 38.71 by Jamaica’s University Tech. LSU’s seasonal-best time of 38.83 remains the NCAA’s No. 3-ranked time for 2014 and is the No. 7-ranked sprint relay time in the history of the event at the Penn Relays.

Ernest, Acy and Allsop returned to the track less than an hour later to run in the Championship of America final in the 4×200-meter relay as they were joined by sophomore Darrell Bush running the leadoff leg. They ran the seventh-fastest time in school history at 1 minute, 21.47 seconds to take home a third-place finish in the event while trailing only UTech (1:20.07) and Texas A&M (1:20.29) across the finish line.

After taking the baton from junior Quincy Downing at the first exchange in the 4×400-meter relay final, Bush struggled to finish the second leg as he pulled up at the 100-meter mark for the second leg with an apparent injury and jogged it around the track. Sophomore Cyril Grayson and junior Vernon Norwood brought the Tigers home in 3:11.43 for a sixth-place finish.

Before the Tigers wrapped up the meet by running in the Championship of America 4×400-meter relay final, the Lady Tigers lined up in the women’s college section and turned in a seasonal-best time of 3:35.59 as their team of freshman Travia Jones, senior Nikita Tracey, sophomore Kiersten Duncan and junior Chanice Chase finished runner-up to the heat-winning time of 3:34.95 by the Houston Cougars.

After Stowers made history with her victory in the 100-meter hurdles, Tiger junior Joshua Thompson lined up in the men’s college 110-meter hurdles after advancing to the final as the sixth-fastest qualifier on Friday in the preliminary round. That’s where Thompson would finish once again as he crossed the finish line in 14.03 (+0.8) for sixth place in the final.

With the 120th running of the Penn Relay Carnival now in the history books, the Tigers and Lady Tigers will return home to Baton Rouge next weekend to wrap up the 2014 regular season as they play host to the likes of Florida, Miami, Ole Miss and Texas A&M in a five-team scored meet at the LSU Invitational being held on Saturday, May 3, at the Bernie Moore Track Stadium.