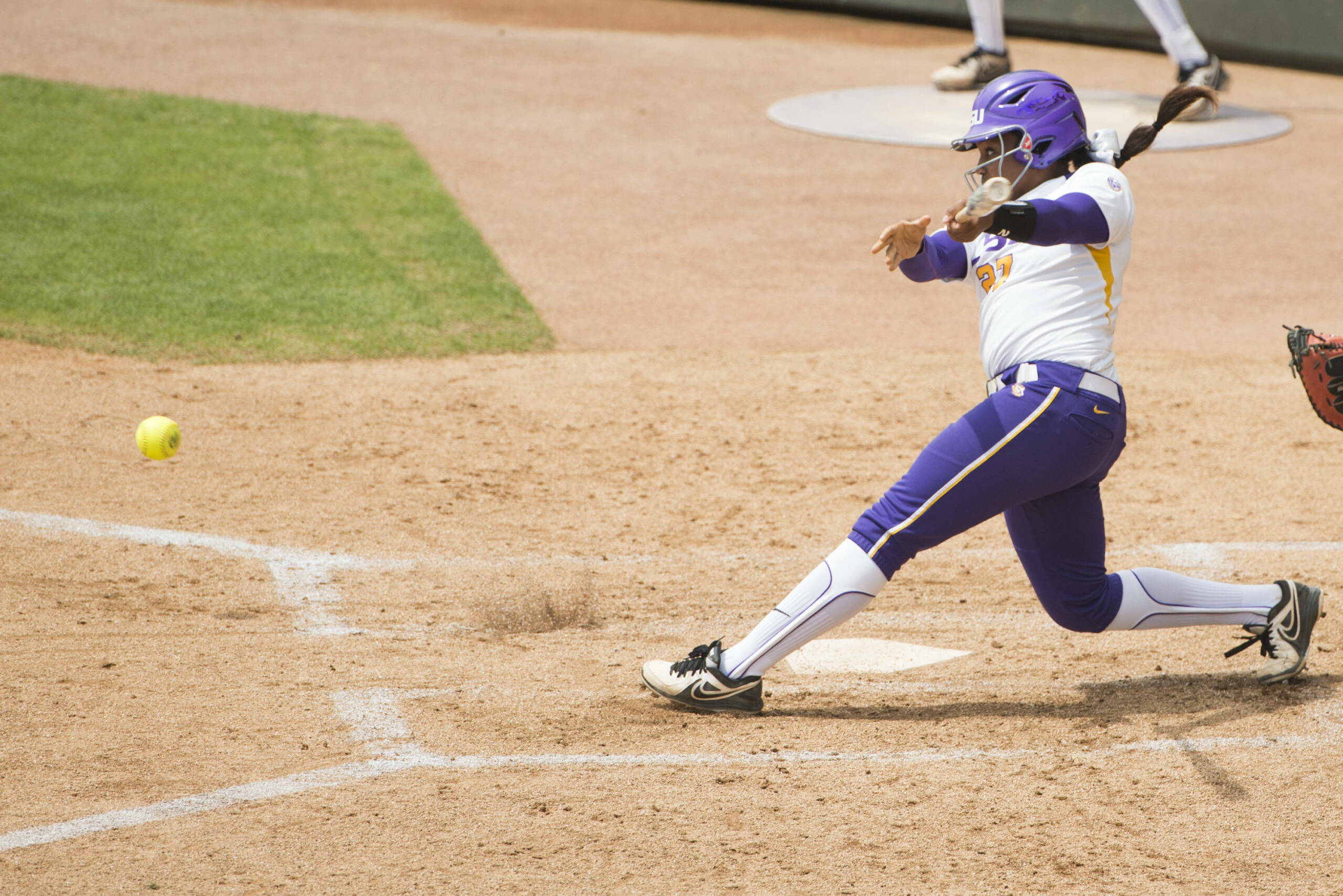 OXFORD, Miss. – After exploding for a bevy of runs and hits the day before, the LSU softball team would once again hold the Ole Miss Rebels to just one run and one hit as the Tigers would grind out a win the old-fashioned way to claim the series with a 3-1 victory Saturday at the Ole Miss Softball Complex in Oxford.

The Tigers (30-20, 10-10 SEC) scored all three of its runs in the very first inning and it proved to be the difference in the end as LSU fought through a handful of innings late where the Rebels (22-27, 3-17) were one swing away from either tying or taking the lead. Instead, Ole Miss stranded seven runners on base and became the first team all-season LSU has held to consecutive one-hit outings in the loss.

“It wasn’t our best game, but I’m happy to come away with a win,” head coach Beth Torina said. “I think they did a good job of playing defense, and ultimately that’s what kept us in the game.”

Bianka Bell had the big swing of the day, hitting her ninth home run of the season as she finished 1-for-3 with two RBI and a run scored, extending her hitting streak to a career-long nine games in the process, tying for the second longest by an LSU player this season. Sahvanna Jaquish went 2-for-3 with a double, RBI and run scored, as she is currently on her best hitting streak of the season which now stands at six games.

“They are both swinging the bat well, and I feel really confident when the middle of our lineup comes up to bat,” Torina said. “Honestly, throughout our lineup I like our chances because everyone is doing a good job and have worked hard to get to this point and deserve the success they’re having.”

Tammy Wray continued her monster month as she went 2-for-3 to bring her average above .300 for the first time all season, while A.J. Andrews went 1-for-3 with a double and run scored to continue her solid weekend against Ole Miss pitching.

Although it took her six innings to get her first strikeout of the game, LSU starter Baylee Corbello earned her second consecutive complete game win in conference action and twirled her second straight one-hitter in a start, improving to 15-7 on the season after holding Ole Miss to an unearned run on one hit in seven innings. The freshman made things interesting late as she finished the afternoon with six walks, coming through when it counted most earning four strikeouts in the final two innings in key situations to help hold on to the win.

“I think I have the best defense in the country behind me,” Corbello said. “I may not have had my best stuff today, but I have all of the confidence in the world in my teammates both offensively and defensively.”

The Rebels may not have found success early in the circle but did late as Shelby Jo Fenter took the loss pitching two innings and allowing three runs on four hits with three walks, as reliever Emily Gaitan who usually gets the start on Saturday’s came on and pitched the final five and Held LSU to just two hits for the remainder of the game with four strikeouts and three walks.

Alyssa Invergo garnered Ole Miss’ only hit, while pinch hitter Natalie Nimmo drove in the Rebels’ only run, getting hit in the sixth with the bases loaded.

The Tigers wasted little time to make an impact early as Andrews drew a lead-off walk to take first base. After a sacrifice bunt by Jacee Blades to move her over to second, Jaquish lifted one to the gap in left center to score the LSU centerfielder on the double to put the Tigers up 1-0. With Jaquish at second and only one out, Bell worked back from a 0-2 count to get it full and cranked the next pitch deep over the left field fence for the two-run bomb to make it 3-0 LSU.

Wray led off the second for LSU with a single to right to take first base, moving to second after a sacrifice bunt by Bailey Landry. Andrews hit a towering shot to left center that was trapped on the ground as Wray moved to third and Andrews trotted in for the double to put two in scoring position. After a fly out to left, Jaquish walked to load the bases for LSU, but a grounder to second ended the inning.

The Rebels led off the bottom half of that very same inning with a walk to put one on, as a single to center put two on for Ole Miss with no outs to put the pressure on. Falcon made a great running catch going toward foul territory for the first out, as the next two flew out to center and left, respectively to end the threat.

With two outs in the bottom of the third, things got hairy quick as a walk put one on for Ole Miss, with the runner stealing second. Another walk put two on for the Rebels, but a fly out to Andrews in center ended the Ole Miss inning.

In the top of the fifth, Jaquish singled to center for her second hit of the game to take first, as a fielder’s choice allowed Bell to take first and forced Jaquish out at second. Quinn drew a walk to put two on, as a grounder by Sandra Simmons advanced the two to second and third. However, a ground out to short ended the LSU frame with two left in scoring position.

Wray singled to left for her second hit of the afternoon, with Alex Boulet coming in to pinch run. Boulet stole second base, as Landry was walked to put two on for the Tigers. Andrews in her at-bat would hit a line drive to short as Simmons would get thrown out at first for the double play to put two outs on the board. The inning ended with a looking strikeout to keep the lead a three runs.

The bottom of the sixth was the most tense the game had been since the start, as a walk put one on for the Rebels with Corbello’s first strikeout of the inning being the first out. Another walk put two on, as on the next play a throwing error by Corbello loaded the bases for Ole Miss. The LSU pitcher would get her second strikeout of the game in the next at-bat, as the shutout would be lost on the next with a hit batter bringing in the first Rebel run of the day to make it 3-1. With the pressure on, a fly out to Simone Heyward in at right ended the inning.

The finale of the series is scheduled for 1 p.m. Sunday in Oxford.