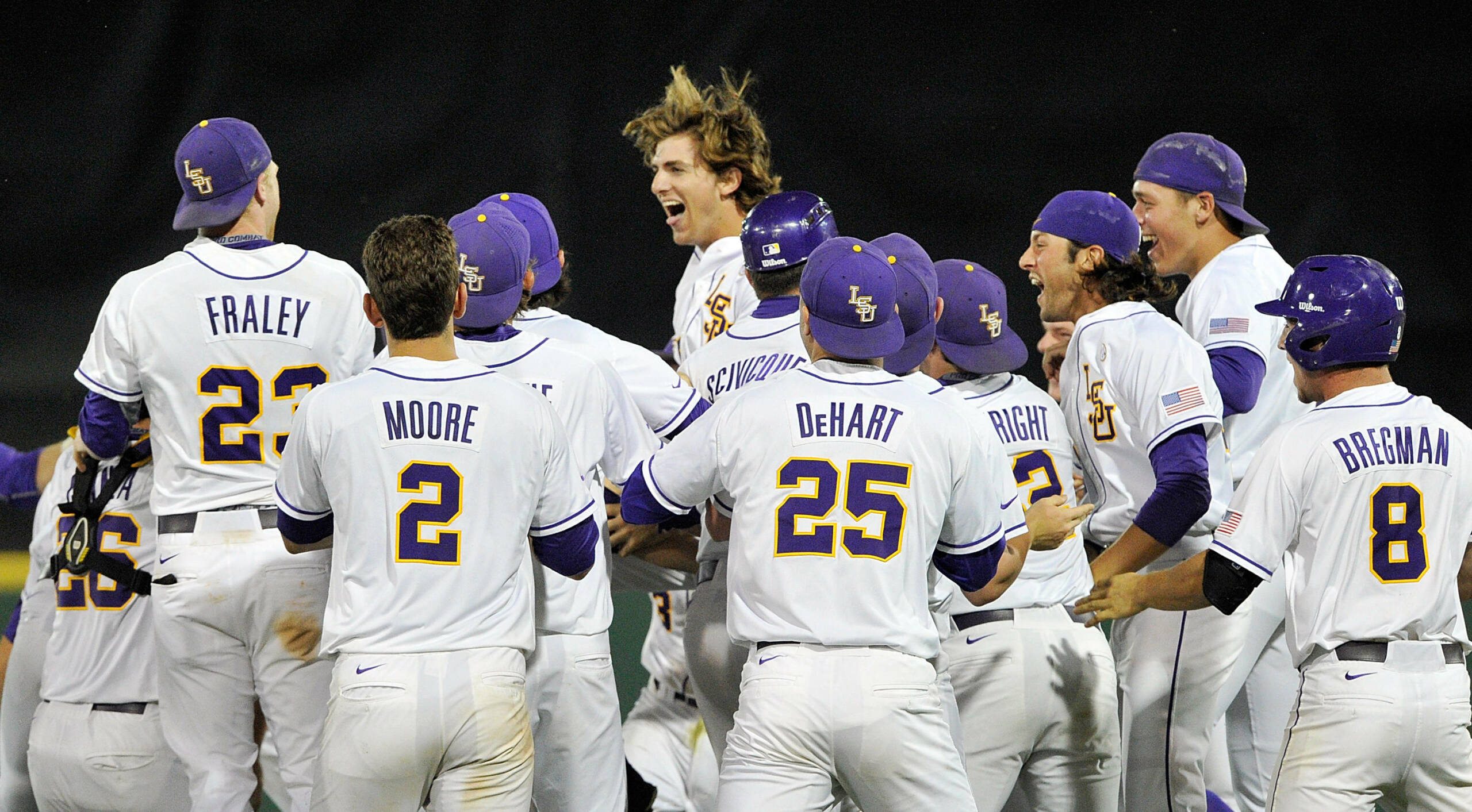 BATON ROUGE, La.— With the runners on first and second in the bottom of the ninth Friday night, rightfielder Mark Laird hit a two-out, walk-off single to score pinch runner Jared Foster and give sixth-ranked LSU a 8-7 victory over Tennessee at Alex Box Stadium, Skip Bertman Field.

LSU improved to 32-10-1 and 11-7-1 in the SEC with the victory. The Tigers have won 12 of their last 14 games and moved to just a half-game behind first-place Alabama in the SEC Western Division standings.

The Tigers and Volunteers square off in Game 2 of the series Saturday at 6:30 p.m. on Cox Sports Television. The game can be heard on the LSU Sports Radio Network, including Baton Rouge flagship WDGL-FM 98.1 FM. Live video, audio and stats of the game may be accessed in the Geaux Zone at www.LSUsports.net/live.

With the scored tied 7-7 in the bottom of the ninth, Lee walked LSU catcher Tyler Moore to lead off the inning. Third baseman Christian Ibarra sacrificed Foster, running for Moore, to second before Lee fanned second baseman Kramer Robertson.

Lee intentionally walked centerfielder Andrew Stevenson, setting the stage for Laird’s game-winning hit. The single was Laird’s second walk-off hit in less than two weeks; he also had a game-winning single in the bottom of the ninth on April 12 versus Arkansas at Alex Box Stadium, Skip Bertman Field.

“Mark Laird‘s just a great athlete who’s going to make contact,” said LSU coach Paul Mainieri. “We have tremendous confidence that he’s going to come through in that situation, and he swung hard and drilled the pitch up the middle. I thought the approach by all of our hitters was outstanding tonight and we had some great at-bats in clutch situations.”

LSU pounded out 17 hits Friday, including seven doubles. Moore and leftfielder Jake Fraley each had two doubles, while Stevenson had three hits and two RBI.

Tennessee got off to a fast start, tagging LSU starter Aaron Nola for two runs in the first inning. Left fielder Christin Stewart hit an RBI single to center field to plate Will Maddox. Designated hitter Nick Senzel then doubled to right field to score Stewart.

“Aaron wasn’t at his best tonight, but he still worked into the sixth inning and gave us a chance to win,” Mainieri said. “A lot of credit goes to Tennessee’s hitters and their approach at the plate. I’ve been saying all week that Tennessee has some very good ball players, and they demonstrated that tonight.”

In the fourth inning, LSU erupted for five runs to take a 5-2 lead. After Fraley led off with a double, catcher Moore doubled down the right field line to score Fraley. With runners on first and second, Robertson doubled to left field to score Moore.

Stevenson hit the Tigers’ fourth double of the inning to center field to score Ibarra and Robertson. With two outs, shortstop Alex Bregman hit an RBI single to add the fifth run of the inning.

The Volunteers returned in the top of the sixth inning to score four runs and regain the lead. With two outs, Maddox singled up the middle to score Nathaniel Maggio. With the bases loaded, pinch hitter Derek Lance lined a double to left-center field against reliever Zac Person to clear the bases and give Tennessee a 6-5 lead.

Tennessee added another run in the seventh inning. After a leadoff single by third baseman Taylor Smart, Maggio doubled to left field to score him.

LSU matched the Volunteers with a run in the bottom of the seventh inning. With the bases loaded, Robertson hit into an RBI fielder’s choice that scored Fraley and make it a 7-6 game.

With two outs in the bottom of the eighth, designated hitter Sean McMullen singled to left field and stole second. Fraley then hit an RBI double to tie the game at 7-7.