by Will Stafford (@WillStaffordLSU)
Friday's Results +0 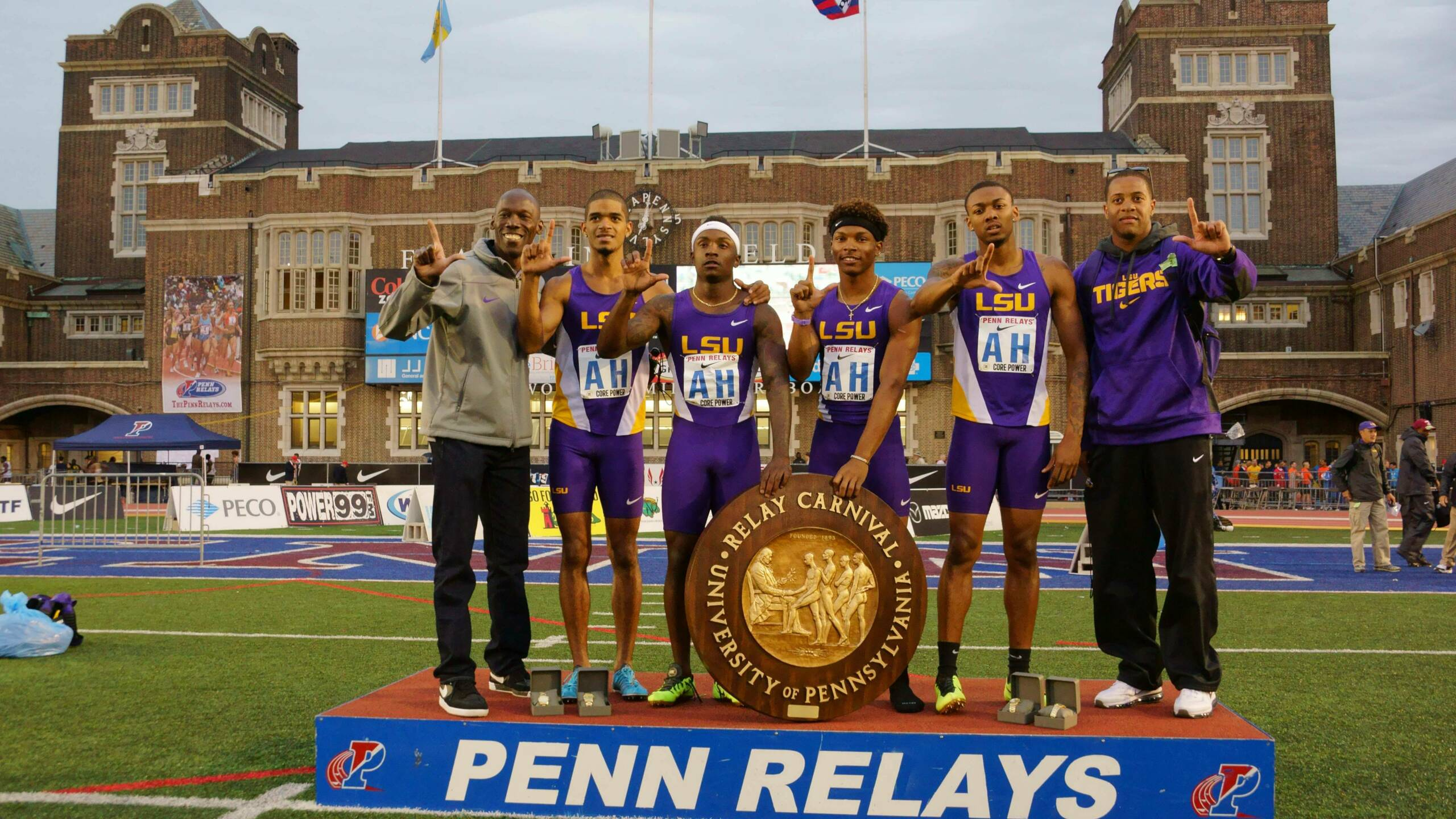 BATON ROUGE – The LSU Track & Field teams have now won a Championship of America relay title at the famed Penn Relay Carnival in 24-straight seasons since 1991 after the Tigers wrapped up Friday’s action with a dramatic victory in the men’s sprint medley relay on a cold and rainy evening at Franklin Field at the University of Pennsylvania.

And the Tigers literally snatched the title out of Penn State’s hands as the Nittany Lions were already being honored as the sprint medley relay champions as the winners of the first heat with a time of 3 minutes, 18.39 seconds while the Tigers were running away with the victory in the second heat.

The Tigers took a commanding lead in the second heat thanks to outstanding 200-meter legs by sophomore Darrell Bush and freshman Tremayne Acy, while junior Quincy Downing only extended their lead with a 47.6-second split on the 400-meter leg. With Penn State (3:18.39) already being honored on the awards podium, the Tigers needed a strong anchor leg from freshman Blair Henderson to take the title back.

Henderson delivered with a 1:48.91 split on his 800-meter anchor leg as the Tigers nipped the Nittany Lions with a winning time of 3:17.96 from the second heat to claim their third Championship of America title all-time in the men’s sprint medley relay and their first since 2010. They also won the sprint medley relay at the Penn Relays in 2008 for their first victory in the event.

The Tigers were was more than six second faster than their closest competitor in the second heat as they were followed across the finish line by Manhattan with a time of 3:24.34 for ninth place overall.

“I knew I was going to get the stick in the lead,” Henderson said following the race. “Watching the first heat, I kind of scoped it out to see what the time was when their (Penn State) 800 leg got the stick and about what time I was going to need to run. When I got the stick, I just did what my coach (Khadevis Robinson) told me and relaxed as best as I could through 500 meters. At that point, I picked it up a little bit to get ready for that last sprint that I had when I came around the final turn. That was probably the key for me in the race.”

Henderson also talked about his motivation for running a strong 800-meter leg for the Tigers as the announcers were already crowning Penn State as this year’s sprint medley relay champions.

“I saw then getting the wagon wheel, but at that point I thought that maybe only teams in the first heat could win,” Henderson said. “I thought there was no way they should be giving them the wheel. Once I saw how we were running and what position we were in, I knew we could still run a faster time even if they were going to give them the wheel.”

With their victory in the Championship of America final in the men’s sprint medley relay on Friday night, the Tigers have an opportunity to accomplish a feat that only one other team in the 120 years of the Penn Relays has accomplished as they will also line up among the favorites in the 4×100-meter relay, 4×200-meter relay and 4×400-meter relay during Saturday’s finale at Franklin Field.

The Tigers kicked off Friday’s qualifiers in the 4×100-meter relay as they turned in the second-fastest qualifying time of the day at 39.80 seconds to win the fourth heat and head into the final with an eye on capturing a 10th Championship of America wagon wheel in the event all-time. They are already tied with TCU as the winningest program in the event in meet history with nine victories all-time in the 4×100-meter relay.

After anchoring the Tigers into the 4×100-meter relay final, Allsop returned to the track to run the second leg in the 4×200-meter relay as he joined up with sophomore Cyril Grayson, sophomore Darrell Bush and junior Vernon Norwood for a qualifying time of 1:21.91 to win the fourth heat. They again finished runner-up to UTech in the qualifying round as the Jamaicans won the third heat with a time of 1:21.61.

The Tigers have won the 4×200-meter relay title five times at the Penn Relays as they are just one victory shy of tying TCU and Tennessee for the all-time lead as the Horned Frogs and Volunteers have won the event a total of six times apiece in the meet’s history. LSU last won Championship of America wagon wheels in the 4×100 and 4×200 relays in 2011 with its sweep in the 117th running of the carnival.

The team then wrapped up Friday’s preliminary action as the second-fastest qualifiers in the Championship of America 4×400-meter relay after winning the second heat with a strong run of 3:05.64.

With junior Quincy Downing leading off and sophomore Fitzroy Dunkley putting the Tigers in position on the second leg, Grayson and Norwood returned to bring the Tigers home in a heat-winning 3:05.64 after running in 4×200-meter relay qualifying earlier in the afternoon. LSU’s effort was second only to Texas A&M’s 3:05.06 from the first heat as the Tigers advanced to their third Championship of America final on the day.

“Our guys will be looking to finish strong here tomorrow after a great day of qualifying today. They have certainly given themselves that opportunity,” said LSU head coach Dennis Shaver. “We have a competitive group this year, and I know they’ll be looking to raise their level of performance in the finals. Saturdays at the Penn Relays are special, and we’re excited to be a part of that history again this year.”

Lady Tiger senior Jasmin Stowers will also have her sights set on history in Saturday’s finale as she could become the first hurdler in meet history to win three Penn Relays titles in the women’s 100-meter hurdles.

And she staked her claim as the favorite once again after racing to the fastest qualifying time of the day at 13.14 (+0.3) to win the second heat. Texas’ Morgan Snow followed with a win in the third heat at 13.15.

Like Stowers, Tiger junior Joshua Thompson was an automatic qualifier into the final of the men’s 110-meter hurdles when he finished runner-up to Houston’s Isaac Williams (13.85) in the third prelim heat with a wind-legal run of 14.00 (+0.8). Thompson’s effort was the sixth-fastest time in Friday’s qualifying round as he will line up in the men’s final at the Penn Relays for the first time in his career.

The Lady Tigers lined up in their first Championship of America final on Friday afternoon in the women’s 4×100-meter relay after qualifying with the fifth-fastest time of the preliminary round at 44.80 on Thursday.

They featured the same foursome from the qualifying round with Stowers running the leadoff leg, sophomore Kiersten Duncan taking the stick on the second leg, freshman Rushell Harvey lining up on the third leg and fellow freshman Nataliyah Friar running anchor as they combined for a fifth-place finish in the final with a run of 44.41. The Texas A&M Aggies captured their sixth-straight Penn Relays title in the women’s 4×100-meter relay with a winning time of 43.11, followed by Oregon (43.33), UTech (43.66) and Texas (43.95) across the finish line.

Lady Tiger sophomore Doren Welch led LSU’s field-event performers while turning in a personal-best performance in winning the women’s college javelin throw with her series-best of 154 feet, 9 inches on her second attempt to strengthen her grip on the No. 10 spot on LSU’s all-time performance list in the event. Nova Southeastern’s Laruschka Joubert finished runner-up to Welch with a throw of 152-5.

Junior Tori Bliss nearly matched her personal-best throw while competing in the women’s championship discus as she posted a series-best mark of 162-8 for sixth place in the final event standings.

Senior All-American Lynnika Pitts turned in a seventh-place finish in the women’s championship triple jump after soaring to a series-best mark of 41-9 ¾ (-1.7) on her sixth and final attempt of the competition. Friar not only anchored the Lady Tigers in the 4×100-meter relay final, but also placed 12th in the college triple jump with her top jump of the day at 39-7 ¾ (-2.7) in the third round.

The Tigers and Lady Tigers will wrap up the 120th Penn Relay Carnival on Saturday afternoon as the final day of this year’s meet gets underway at 8 a.m. CT with the first field events of the day followed by the first finals on the track at 12:50 p.m. After competing at the Penn Relays, they will wrap up the 2014 regular season next weekend by hosting the LSU Invitational on Saturday, May 3, at the Bernie Moore Track Stadium.