by Will Stafford (@WillStaffordLSU)
Thursday's Results +0 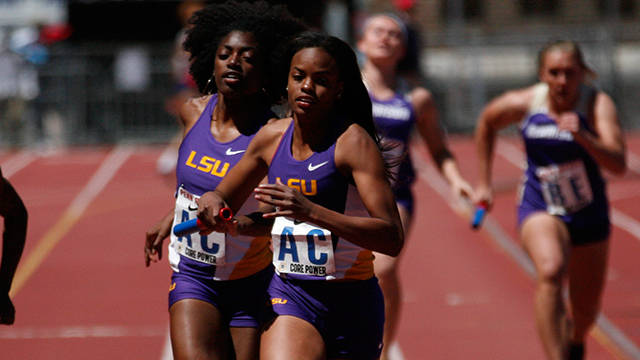 PHILADELPHIA – The Lady Tigers will have an opportunity to extend LSU’s impressive streak of winning at least one Championship of America relay title at the Penn Relays to 24-straight years on Friday afternoon at Franklin Field after qualifying for the women’s 4×100-meter relay final on Thursday to kick off the 120th running of one of the world’s premier relay carnivals.

The Lady Tigers were the fifth-fastest qualifiers into Friday’s Championship of America final in the women’s 4×100-meter relay after edging Auburn and East Carolina for the win in the third preliminary heat.

While senior Jasmin Stowers led off the team with a strong first leg, sophomore Kiersten Duncan, freshman Rushell Harvey and freshman Nataliyah Friar each made their Penn Relays debut with the Lady Tigers during Thursday’s qualifying race as they combined for a heat-winning time of 44.80 seconds to edge East Carolina (45.01) and Auburn (45.19) at the finish line.

The Lady Tigers are certainly in contention to win their first Championship of America 4×100-meter relay title since 2008 as they are already the winningest team in the event with 12 wins all-time at the Penn Relays.

Before anchoring the Lady Tigers to a qualifying performance in the 4×100-meter relay, Friar stepped onto the long jump runway and leaped to a wind-aided series best of 19 feet, 5 ¼ inches (+3.2) to take a ninth-place finish in the championship division of the women’s long jump. Friar came up just one quarter of an inch short of earning a spot into the eight-person final as Hampton’s Teiara Denmark claimed the eighth spot at 19-5 ½ as the last qualifier. NC State’s Alexis Perry won the women’s long jump with a top mark of 20-9 ¼ in the final round.

Senior Denise Hinton continued her impressive form in the hammer throw during Thursday’s opener at the 120th Penn Relays as she scored the silver medal as the runner-up in the women’s championship division with her series-best mark of 204-0 in the fourth round as she threw 204-0 for the second-straight meet.

Hinton finished runner-up to Princeton’s Julia Ratcliffe in the final hammer throw standings as the NCAA leader took home the title with a winning mark of 216-2 in the second round. Ratcliffe entered the meet with an NCAA-leading mark of 230-7 that she set just one week ago at Princeton’s Larry Ellis Invitational as she remains the national leader in the event by 13 feet over Akron’s Brittany Funk (217-7).

With her performance, Hinton continued an impressive run of form that started with a school-record-setting throw of 209-6 ton win the women’s hammer throw title at LSU’s “Battle on the Bayou” on April 5. She even followed by throwing 204-11 for the win at Miami’s Hurricane Alumni Invitational on April 12 and 204-0 for the win at LSU’s Alumni Gold last weekend.

Fellow senior Karen Henning also featured in the women’s championship hammer throw on Thursday afternoon as she earned a seventh-place finish with a top throw of the day at 187-2 also in the fourth round.

Freshman Rebekah Wales was the top Lady Tiger in the women’s championship javelin as she opened the competition with a series-best mark of 155-10 that earned her a fifth-place finish in the final event standings.

The Lady Tigers ended Thursday by lining up in the third qualifying heat of the women’s Championship of America 4×400-meter relay as their foursome of Duncan, senior Nikita Tracey, freshman Travia Jones and junior Chanice Chase teamed for a fourth-place finish in the race with a time of 3 minutes, 43.91 seconds, crossing the finish line behind teams from Texas (3:31.93), Texas A&M (3:37.15) and Harvard (3:43.13). With their time of 3:43.91, the Lady Tigers finished in 13th place overall in the qualifying round.

The Tigers and Lady Tigers return to action Friday for the second day of competition at the 120th Penn Relays as the morning’s field events begin at 8 a.m. CT followed by the first qualifiers on the track at 11:30 a.m. with the men’s Championship of America 4×100-meter relay. The Lady Tigers will follow in the Championship of America final in the women’s 4×100-meter relay at 11:50 a.m. CT.