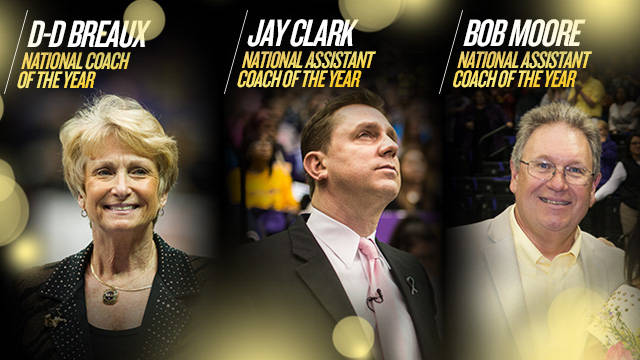 The awards were voted upon by the head coaches of all Division I women’s collegiate gymnastics teams.

“To be selected by your peers is truly a very gratifying award,” Breaux said. “I am honored that coaches around the country recognized the outstanding work our team has accomplished all season, and I am extremely proud that Jay and Bob could earn this award together because they are two of the finest coaches in the nation.”

Breaux led LSU to the highest placement in school history with a third place finish at the NCAA Super Six on Saturday.

Breaux, who also earned NACGC/W Central Region Coach of the Year honors, guided the Tigers to the No. 1 national ranking for three straight weeks during the season, the first time LSU has held the No. 1 ranking since 2005.

The Tigers shattered the school record for highest team score three times in 2014, including a 198.325 in the NCAA Baton Rouge Regional that ended up in a tie as the highest score of any team in the nation this season.

LSU also established a school record with 13 straight meets with a score of 197 or higher, breaking the previous best of eight consecutive meets in 2004.

In his second season at LSU, Clark coached the bars lineup to the No. 1 ranking in the region and the No. 5 national ranking with a school-record 49.430 regional qualifying score. LSU tallied three of the top 10 bars scores in school history, including a 49.600 on the road at the Metroplex Challenge that ranks as the second best.

Moore coached the vault lineup to the No. 1 national ranking with a school-record 49.550 RQS, and LSU recorded the highest vault total in program history with a 49.650 in the regional.

It marked the fourth national title on vault in LSU history, and all four have come under the direction and leadership of Moore.

“On the ride home from the NCAA Championships, we heard from Senator Mary Landrieu, Representative Nick Lorusso, our boosters, TAF members, Bengal Belles and several people who come to our events, and it was extremely gratifying and rewarding to speak with all these wonderful people who have supported our program all year,” Breaux said.

Deposits for 2015 season tickets are currently being accepted at www.LSUtix.net.