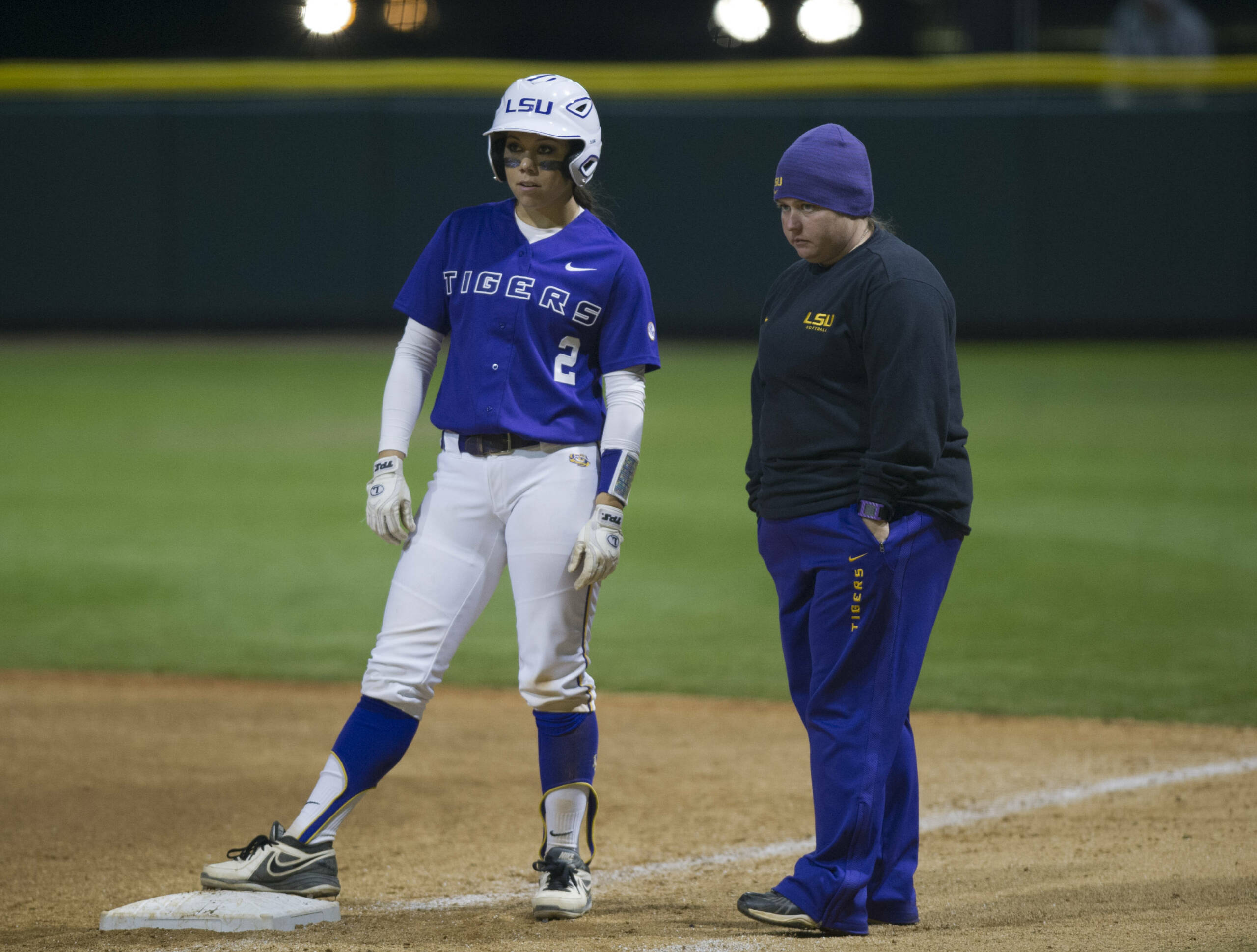 COLUMBIA, S.C. – On a day where they would have to finish one game before starting another in front of a national television audience, the offense of the LSU softball team would be too much for the South Carolina Gamecocks to handle as the Tigers scored 14 runs, including a 10-run sixth, to earn a 14-1 victory to claim the series at the Carolina Softball Stadium at Beckham Field in Columbia.

Hours after completing game one of the series which was suspended yesterday due to rain, LSU (27-19, 8-9 SEC) earned its fourth-consecutive SEC win and third-straight conference series by turning a 4-1 lead into a 10-run rout in an inning where LSU earned double-digit runs on eight hits and three South Carolina (29-17, 8-12) errors in the frame. The 14 runs scored by LSU ties a season high and is the third consecutive game for the group scoring at least 13 runs in a conference game.

“Hat’s off to our offense for really showing up today and being relentless,” head softball coach Beth Torina said. “They continued to put on the pressure and force the issue. They did a really good job of continuing to score throughout the day.”

All but one of the 10 LSU batters that went to the plate in the game earned a hit on the day, led by freshman Sahvanna Jaquish who became the first player this season and just the third player in team history to earn five hits in a game as she went 5-for-5 and finished a home run short of the cycle with a double, triple, an RBI and three runs scored in the win.

“She really has been swinging well this weekend, and I’m so excited about the future of the program with players like her in it,” Torina said.

Along with Jaquish, four other LSU batters had multiple hits against South Carolina as Allison Falcon and Tammy Wray each went 2-for-4 with two RBI and two runs scored. Wray hit her second home run of the season, while Falcon hit her fourth double of the year as Jacee Blades went 2-for-4 with an RBI and run scored.

Bianka Bell had only one hit but it was a big one as she launched her eighth home run of the season in the monster sixth and finished 1-for-4 with three RBI and a run scored. Alayna Falcon was the final LSU player to drive in multiple runs on the day, finishing 1-for-1 in a pinch hit role with two RBI. Constance Quinn had a hit with a run scored while Bailey Landry went 1-for-2 with a run scored.

Starting pitcher Baylee Corbello earned her 13th win of the year in earning the complete-game victory, allowing one run on two hits with four strikeouts. The freshman had eight walks on the day, but she and the Tiger defense worked out of a host of jams to hold the Gamecocks to a single score.

“We’ve put this team through every scenario you could possibly think of, and I feel like every time they take the field they are prepared for whatever scenario comes their way during a game,” Torina said. “We’ve played a who’s-who list of college softball powers a lot of adversity, and they have shown that they can fight and excel in these kinds of situations.”

South Carolina pitching had a tough time on Saturday as a whole, as the team roughed up Nickie Blue to the tune of 11 runs in the opening game loss and game two starter Julie Sarratt who gave up 10 runs, seven earned on 13 hits in five innings with just two strikeouts, while Lakyn Shull pitched an inning and gave up four runs, one earned, on four this with a walk and a strikeout.

With two outs already in the opening frame, Jaquish hit a screamer to right center and motored around for the triple to keep the inning alive for the Tigers. Bell was hit to put runners at the corners for LSU, but the inning ended with a grounder to third.

The Tigers opened the second with a single to left by Simmons, but a fielder’s choice with Falcon at the plate forced out the first baseman at second for the first out. With a 2-2 count, Wray connected on a low pitch and drove it out of the park in left field for the two-run shot to put LSU up. Landry reached on a bunt single to keep the inning alive, but another fielder’s choice forced out the right fielder with Andrews now at first. Blades beat out a throw for the infield single to put two back on for LSU, but Andrews was picked off to end the inning.

Jaquish was the first of two players in the top of the third inning to earn her second hit of the day as she singled to left to take first. After a fly out to right, Quinn grounded out to third for the second out as Jaquish moved over to second. Simmons was the other player to earn her second base knock with a shot to second base to put runners at the corners. Falcon needed just one swing on the first pitch of her at-bat to make it count as she singled through the right side to score Jaquish to cap the two-out rally to put LSU up 3-0 as a strikeout ended the frame.

Corbello and the defense got out of a big jam in the bottom of the fourth as she opened and closed with a strikeout to keep the Gamecocks off of the board. Consecutive walks put two runners on for USC, as a grounder advanced the two to third with two outs to put two in scoring position for the home side but eventually was kept scoreless.

For the second time on the day, Jaquish led off an inning with a hit as she singled to left in the top of the fifth to take first. Bell reached first on a throwing error by the pitcher allowing Jaquish to move to third on the play. After an infield popup, Bell stole second and Simmons brought her in on a grounder to second for the RBI to make it 4-0 LSU.

In the bottom of that same inning, the Gamecocks were threatening and got a run to cross the plate to make it 4-1, but the inning ended on a technicality as a player was not correctly re-entered in the game and instead of getting a walk with two outs and the bases loaded the frame ended with South Carolina trailing by three.

The floodgates opened in the sixth as Wray opened the inning with a ripped single to left field and was replaced on the bags by Alex Boulet to run. A throwing error on a sacrifice bunt by Landry put two in scoring position for LSU. Andrews reached on a fielder’s choice at third base, but an error allowed Boulet to score to make it 5-1 LSU.

Blades singled to score Landry to make it 6-1, with Andrews at second to keep two on for the Tigers. Jaquish earned her fourth hit of the day, smashing one through the left side to easily score Andrews from second to make it 7-1 LSU and the offense continuing to roll.

The biggest hit of the frame came after a pitching change from South Carolina, as Bell took the first pitch she saw over the fence in left center for the no-doubter three-run home run to make it 10-1 LSU. After another handful of defensive changes for the Gamecocks, Quinn singled down the left field line and was advanced to second on a sacrifice bunt by Simmons. The onslaught continued as Falcon doubled down the left field line scoring Quinn to make it 11-1.

With the batting order turning over, Wray reached first on a dropped fly infield fly ball with Falcon staying put at second base, as a walk loaded the bases for the Tigers. A strikeout was the second out for LSU in the inning, but a wild pitch allowed Falcon to score to make it 12-1, but another pleasant surprise came from pinch hitter Alayna Falcon who singled to right center scoring Wray and Simone Heyward who came on to pinch run to make it 14-1.

The last hit was the clincher for Jaquish, who lined one down the left field line for her team-leading fifth hit of the contest. She became the first player since Lauren Castle against Mississippi State in 2005 to have that may hits in a single game.

“We’re still fighting for so many things,” Torina said. “We can’t take any game lightly or assume that anything is won. We are going to assume that South Carolina is going to show up with their best and bring our best game all over again.”

First pitch for the series finale against South Carolina is set for 12 p.m. Sunday at Beckham Field.