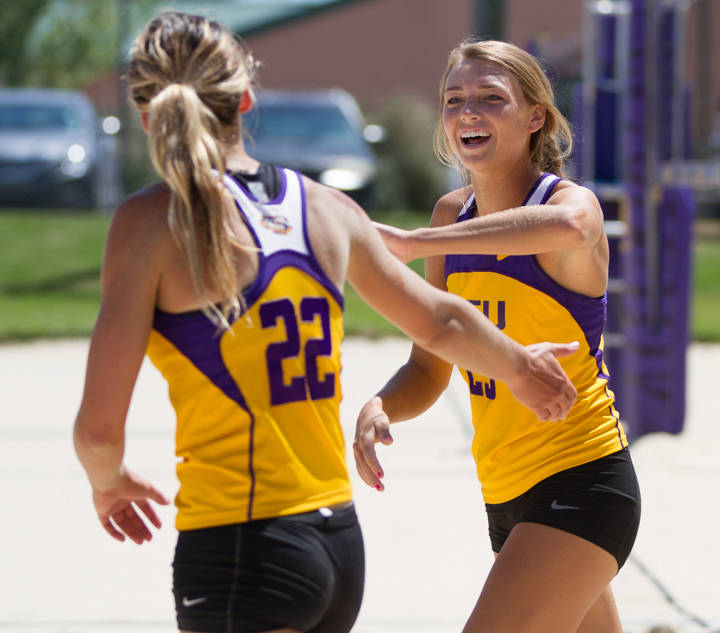 BATON ROUGE – The LSU sand volleyball team (6-10) recorded a 4-1 win against UAB (4-8) before falling 3-2 to Tulane (6-6) Saturday at Mango’s Beach Volleyball during the Battle on the Bayou.

“Today was a great end to an amazing season,” associate head coach Russell Brock said. “There were so many incredible performances, and it’s hard to really believe that the season is over. We’ve been training and competing so hard for the last couple months that it will take some time to figure out how to slow down.”

Malorie Pardo and Laura Whalen kicked off the day on court five with a 21-18 first-set win. The pair came out charging in the second set and followed with a commanding 21-8 game over UAB’s Amber Treace and Ally Slaughter to take the first point of the day.

After falling 21-16 in the first set to the Blazers’ Becca Howard and Gabby Deshotel, Briana Holman and Mimi Eugene retaliated for a close 21-18 second set. With an even closer third set, LSU’s court-four duo fought through thrilling match points to take set three 16-14 and tally the Tigers’ second point of the day.

Helen Boyle and Kaitlin Hatcher kept the momentum going and recorded a quick 21-13, 21-11 victory over UAB’s Alison Woods and Sam Serley in the No. 2 spot to clinch the winning point for the Tigers.

Victoria Boraski and Khourtni Fears fought through two close sets on court three but fell 21-19, 21-19 to the Blazers’ Sara Rishel and Rachel Fairbanks, giving UAB its lone point of the match.

The No. 1 pair of Meghan Mannari and Katie Lindelow fell 22-20 in a thrilling first set against UAB’s Kiri Hirini and Bethanie Thomas. LSU’s pair recovered with a 21-17 set-two win that gave them the momentum to take the third game 15-11 and record the Tigers’ fourth point of the day.

Pardo and Whalen started the Tigers off on a high note again against Tulane. The pair battled through a tight first set and multiple match points to take it 24-22 before scoring a dominating 21-13 second-set victory over the Green Wave’s Sarah Strasner and Miah Dirrell.

Holman and Eugene took a close first game 21-19 before falling 21-13 in set two. The pair battled to go 2-0 for the day but could not hold on and fell 15-9 to Tulane’s Olivia Utt and Courtney Liddle.

The pairing of Boraski and Fears faced off against the Green Wave’s Grace Weaver and Hannah Holmes on court three and fell 21-13, 21-12.

With Tulane a point away from clinching the match, courts one and two battled to keep a Tiger victory. Boyle and Hatcher were in their third set of competition after winning 21-13 in set one and falling 21-14 in the second set to the Green Wave’s Annie Shurtz and Anna Wruck.

In the top spot, Mannari and Lindelow were in a consistently neck-and-neck battle with Tulane’s Tea Juric and Jackie Wegner and a set behind after falling 21-18 in the first.

The Green Wave ultimately clinched the match on court one as Mannari and Lindelow fell 21-17 in set two. LSU snatched up the final point of the day as Boyle and Hatcher won 15-11 in the third set.

“We had a chat after the last match, and we know that this group set a great foundation for our program moving forward,” Brock said. “It’s exciting to see how far this group came and to know they will come back next year at such a better starting point. Also with the addition of our first recruiting class next year, it’s clear that the future of the program is very bright. This year was such a good start. I’m proud and honored to have been able to work with Fran (Flory) and Drew (Hamilton) to start this program.”