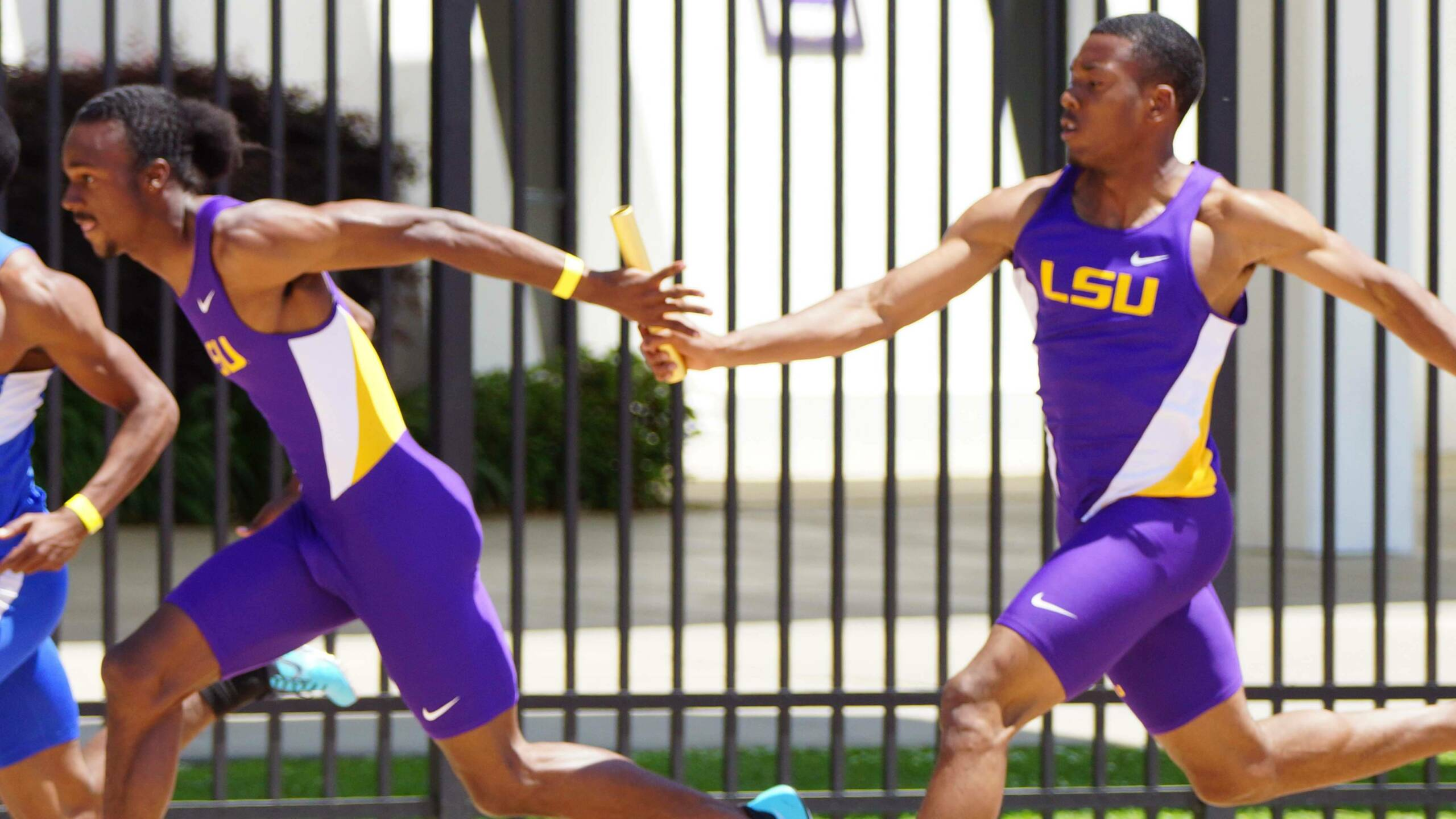 BATON ROUGE – The LSU Tigers debuted their top 4×100-meter relay team to rave reviews during Saturday’s LSU Alumni Gold meet at the Bernie Moore Track Stadium as they sprinted to victory in a seasonal-best time of 38.90 seconds while emerging as a national championship contender in the event for the 2014 outdoor season.

The Tigers had yet to line up their preferred sprint relay team this season with junior Aaron Ernest and sophomore Nethaneel Mitchell-Blake both recovering from injuries suffered indoors this year.

And it was those two returning to the squad to set the pace in Saturday’s event as Mitchell-Blake handed off to Ernest in a strong position at the first exchange. After Texas A&M took the lead at the second exchange, freshman Tremayne Acy put the Tigers right back in the lead with a blistering third leg before senior Shermund Allsop extended their advantage through the finish line with a seasonal best of 38.90 in the final.

The Tigers turned in the NCAA’s No. 3-ranked time this season as they crossed the finish line ahead of the Tigers Olympians in second place as they clocked 39.19 with a squad of Gabriel Mvumvure, Richard Thompson, Tristan Walker and Kyron Blaise. Texas A&M trailed in third place with a time of 39.48, while Louisiana Tech (39.78) and Southern (40.16) rounded out the top five in the event.

LSU now follows only Florida (38.29) and Texas A&M (38.30) in the NCAA rankings in the 4×100-meter relay this season as they now build momentum heading to the Penn Relays next weekend.

“We saw an outstanding performance by those guys today as they’ve not really had the chance to run together at all this season,” said LSU head coach Dennis Shaver. “I don’t think any of us really knew what we’d see from the group today, but you can’t say much more about the result. There were some obvious aspects of the race that need to be cleaned up with the exchanges and things like that, but it’s certainly a great place for us to start as we prepare for the championship season in just a few weeks.”

Two Tigers running on LSU’s winning 4×100-meter relay team also turned in impressive performances in the 100-meter dash later in the afternoon when Ernest opened his season with a wind-legal 10.28 (+1.6) to finish fourth overall as the top collegian in the field and Allsop nearly matched his personal best with a wind-legal 10.30 (+1.7) to follow Ernest in fifth place overall as the second-fastest collegian on the afternoon.

The Lady Tigers posted one of the NCAA’s Top 10 performances of their own in the 4×100-meter relay when their foursome of senior Jasmin Stowers, sophomore Kiersten Duncan, freshman Jada Martin and freshman Rushell Harvey combined for a seasonal best of 43.72 to emerge as the No. 6-ranked relay team nationally in 2014 while finishing runner-up to the winning time of 43.51 by Texas A&M.

Stowers led  trio of Lady Tigers on the spring relay team that set personal bests on the afternoon with a career-best performance in winning the women’s 100-meter hurdles during the competition.

Stowers has already proven herself as a national championship contender as a senior in 2014 after wrapping up the indoor season with a school-record run of 7.96 to miss winning the NCAA Indoor title in the 60 hurdles by just .01 seconds while claiming her second-straight bronze medal in the event at the NCAA Championships.

Stowers has carried that momentum outdoors as she entered Saturday’s LSU Alumni Gold as the NCAA’s No. 2-ranked performer under all conditions in the 100-meter hurdles with a seasonal-best wind-aided clocking of 12.87 that was set at the Texas Relays in finishing runner-up to the national-leading time of 12.68w by Kentucky’s Kendra Harrison during the competition.

And Stowers took the next step in her march toward the NCAA Championships on Saturday afternoon when she cruised to the victory with her wind-legal personal best of 12.81 (+1.9) to finish more than two tenths of a second in front of Louisiana Tech’s Kim Francis in second place at 13.02. That performance smashed her previous personal record of 12.88 set three years ago in claiming her first career SEC Outdoor title as a freshman in 2011 and moved her into the No. 4 spot on LSU’s all-time performance list in the event.

Like Stowers, Duncan and Harvey also set new wind-legal personal bests with their performance on the afternoon. Duncan won the second heat of the women’s 200-meter dash with the fourth-fastest time of the day at 23.52 (+1.4), while Harvey followed in second place in the heat with the eighth-fastest time of the competition at 23.67 (+1.4) in the final standings.

The Lady Tigers pulled off a sweep of hurdle titles on Saturday afternoon as fellow senior Nikita Tracey followed Stowers with a dominating victory in the one-second final of the women’s 400-meter hurdles.

Tracey is also showing the form that earned her All-America honors in the 400-meter hurdles in her debut season with the Lady Tigers a year ago as she slashed nearly one full second off of her seasonal best in winning the event on Saturday afternoon with a run of 56.80, finishing the race nearly three tenths of a second ahead of Arizona’s Nnenya Hailey in second place with a time of 57.07.

Tracey smashed her seasonal best of 57.53 as she is now the NCAA’s No. 4-ranked 400-meter hurdler this spring and within three tenths of a second from the national lead of 56.55 by Texas A&M’s Shamier Little.

The Tigers and Lady Tigers featured four other event winners at the LSU Alumni Gold on Saturday afternoon as senior Denise Hinton won her third-straight women’s hammer title with a top throw of 204 feet, 0 inches, junior Rodney Brown claimed the men’s discus crown with a winning mark of 191-10 and junior Philip Primeaux (14:45.05) and sophomore Andria Aguilar (18:09.48) swept 5,000-meter titles during the meet.

Despite coming up a split-second shy of claiming the men’s 400-meter crown, Tiger junior Vernon Norwood cracked the NCAA’s Top 10 in his 400-meter debut this outdoor season with a time of 45.64 to cross the finish line in second place with No. 7-ranked time nationally in 2014. Texas A&M’s world leader Deon Lendore took the title in 45.47 just one week after clocking the World’s fastest time at 44.90 at Arizona State.

Norwood later ended the meet by anchoring the Tigers to their second-fastest 4×400-meter relay time of their year with a team-leading 45.41-second split in their finale. He teamed with junior Quincy Downing (46.32), sophomore Darrell Bush (45.46) and sophomore Cyril Grayson (46.05) in running 3 minutes, 3.24 seconds to finish runner-up to Texas A&M’s winning time of 3:02.64 in the event.

Downing was one of two other Tigers to crack the NCAA’s Top 15 with his performance on Saturday after slashing more than one second off of his personal-best time in the 400-meter hurdles. After leading the race on the final curve, Downing took third place with a PR of 51.07 as he followed Texas A&M-Kingsville’s Sergio Rios (50.27) and Texas A&M’s Gregory Coleman (50.57) across the finish line.

Downing smashed his previous PR of 52.18 set at Miami’s Hurricane Alumni Invitational last weekend with the No. 13-ranked time in the NCAA rankings in the 400 hurdles for the 2014 outdoor season.

Also breaking into the NCAA’s Top 15 with his performance at Saturday’s LSU Alumni Gold was fellow junior Jeremy Tuttle, who unleashed a nearly four-foot personal best with a top throw of 215-8 on his fourth throw in the men’s hammer while earning a third-place finish in the event. Tuttle posted the No. 15-ranked mark in the NCAA this season while following Arizona’s Jordan Young (224-0) and unattached athlete Justin Victor in the final standings in the men’s hammer throw.

Tuttle has now raised his personal best in the hammer by more than 14 feet over the course of the 2014 season after also throwing 209-7 at the Jim Mize Invitational and 212-0 at the Texas Relays earlier this spring.

Sophomore Mayme Cook highlighted a host of other Lady Tigers setting personal bests on the afternoon as she cracked LSU’s all-time Top 10 list in the women’s javelin in a runner-up finish in the event. Cook earned a second-place finish in the event after throwing 158-8 on her very first throw of the competition to emerge as the No. 7-ranked javelin thrower in school history.

With this year’s LSU Alumni Gold meet now in the books, the Tigers and Lady Tigers will make their annual trip to Philadelphia, Pa., next weekend to compete in the 120th running of the Penn Relay Carnival that is set to run April 24-26 at historic Franklin Field at the University of Pennsylvania. They will then wrap up their regular season outdoors in two weeks when they return home to host Florida, Miami, Ole Miss and Texas A&M in a five-team scored meet at the LSU Invitational being held on Saturday, May 3, at the Bernie Moore Track Stadium.