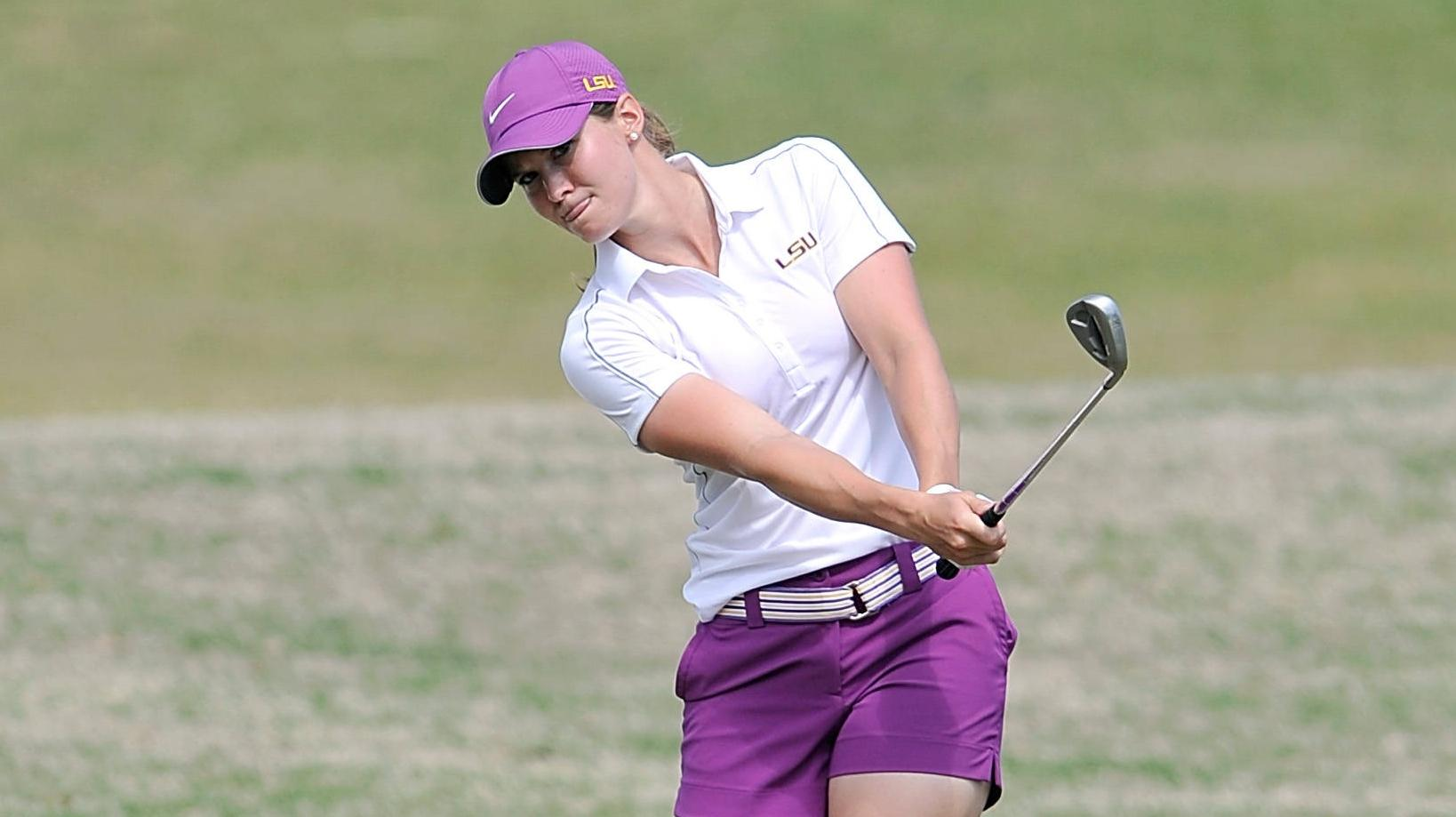 BIRMINGHAM, Ala. – The 16th-ranked LSU women’s golf team has the clubhouse lead in the 2014 Southeastern Conference women’s golf championships, finishing their round at 7-over par 295 just before play was suspended just after 7 p.m. CDT Friday at the Greystone Country Club’s Founders Course.

The final wave, which featured Arkansas, Alabama and South Carolina, did not complete the round, which was delayed twice for rain, and will complete the 1-5 holes that the five groups have to play Saturday morning at 8 a.m. The field will be repaired after the conclusion of the round and tee times for the second round are expected to begin at approximately 10 a.m.

Arkansas is on the course at 6-over-par, one shot in front of LSU at this point. Auburn, which played in the first wave off on Friday is done at 8-over 296, with Vanderbilt another two shots back in fourth at 10-over 298. South Carolina and Alabama are on the course with Arkansas at 13-over par with Georgia finished in seventh at the moment at 14-over 302.

The three teams on the course are the top three in national Golfstat rankings entering the tournament with Arkansas at No. 4, South Carolina at 6 and Alabama 7.

The start of the tournament was delayed for an hour by rain and then after about 90 minutes of play in a continuous rain, the fairways began to show standing water and play was stopped for three hours until 1:30 p.m.

LSU played consistent golf on the front nine, posting six birdies and turning at 2-over par. Despite a couple of hiccups coming in on the treacherous 15th hole, LSU continued to play focused golf and really didn’t let the conditions bother them. Three Lady Tigers – seniors Ali Lucas and Lindsay Gahm, and junior Madelene Sagstrom – all posted 1-over 73s to stand in a group tied for sixth place. Sagstrom birdied the final hole in near darkness having to come from the side of the bank behind the last green.

“I think it was just a matter of being mentally strong out there,” said LSU Coach Karen Bahnsen. “We only had three on the golf course when play was pulled in. It was nasty. The mindset coming in was no one was going to play again (Friday). The fact that the girls all kept their focus was huge. We got off to a good start and really played some great golf. We had a couple of mistakes there at the end, but they kept their composure through that. I’m really proud of them. It’s just day one. We just have to keep our focus and put all our attention on this golf course because it’s a really good golf course and it demands your attention and your respect.”

LSU’s other counting score was a 4-over 76 by freshman Caroline Nistrup.

The average score for the rounds that were completed was 77.53.

Live scoring for the second round can be found on LSUsports.net through Golfstatresults.com and the Golfstat Live app and follow updates during the round on Twitter @LSUwomensgolf.