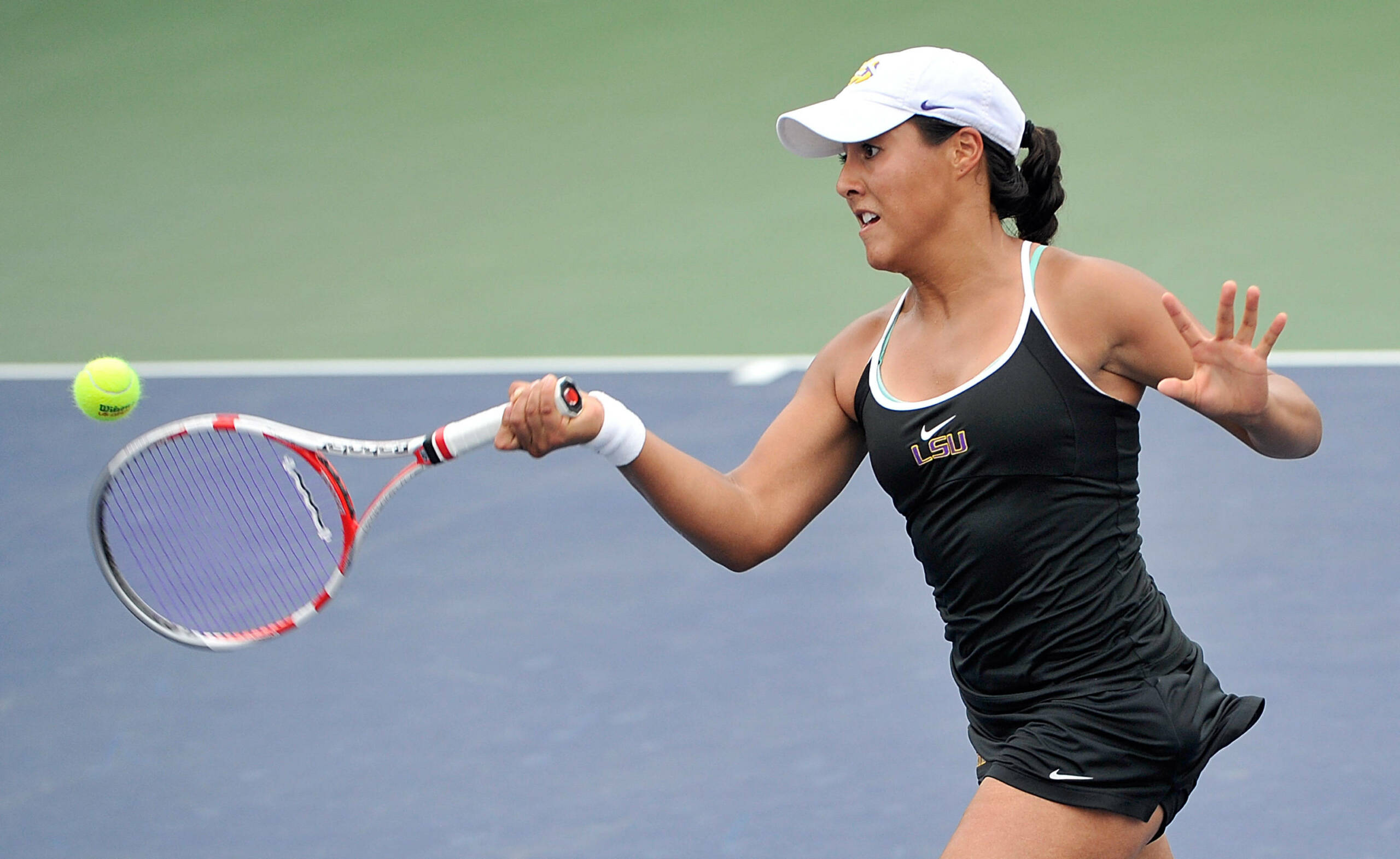 COLUMBIA, Mo. – Gabrielle Otero won a thrilling three-setter to clinch the match as the 11th-seeded LSU women’s tennis team defeated 14th-seeded Mississippi State 4-3 on Wednesday in the first round of the SEC Tournament.

“I thought [the weather] really played a big part in a few of the matches,” said LSU head coach Julia S. Sell. “Some of the girls had a rough day, but on the other courts, Joana [Vale Costa] had a great start and Ella persevered and played great. Then Gabrielle [Otero] came through. That’s what being on a team is all about. You’ve got to be able to win at every spot. We can get wins anywhere on any given day.”

With the overall match tied at 3-3, all eyes fell to court six as Gabrielle Otero and Petra Ferancova battled for the victory to clinch the match.

After falling in the first set, LSU’s Otero won a dominating second set. The third set went back and forth in an intense battle, but Otero ultimately edged Mississippi State’s Ferancova 4-6, 6-1, 6-4 to clinch the match for the Lady Tigers.

“Gabrielle [Otero] has really worked hard this season,” said Sell. “The last few weeks, I feel like she has just really committed to listening to us and to making small adjustments so she can keep improving. She kind of let go of worrying about winning and losing and just started focusing on being better. Today, that’s why she was able to relax in the final moments of that match.”

The Lady Tigers split the first two doubles courts as Joana Vale Costa and Noel Scott fell 8-4 to No. 46 Alexandra Perper and Naomi Tran on court one, while Abigail Owens and partner Otero defeated Roseline Dion and Timea Guibe 8-2 on court two. Skylar Holloway and Ella Taylor took the lead and never looked back as they secured an 8-4 victory over Ferencova and Georgiana Patrasc on court three to secure the doubles point for LSU.

In singles, LSU’s Vale Costa came from behind to knock off No. 56 Patrasc for her tenth singles victory while wearing the Purple and Gold. In the first set, Vale Costa fell behind 4-2, but the freshman battled back to pull off a 6-4, 6-2 victory on court one.

LSU’s Taylor pushed her winning streak to four matches as she finished off Mississippi State’s Dion 6-1, 6-3 on court four.

The Lady Tigers will face 6th-seeded Tennessee on Thursday, April 17 at 11 a.m. CT in Columbia, Mo. in the second round of the SEC Tournament.