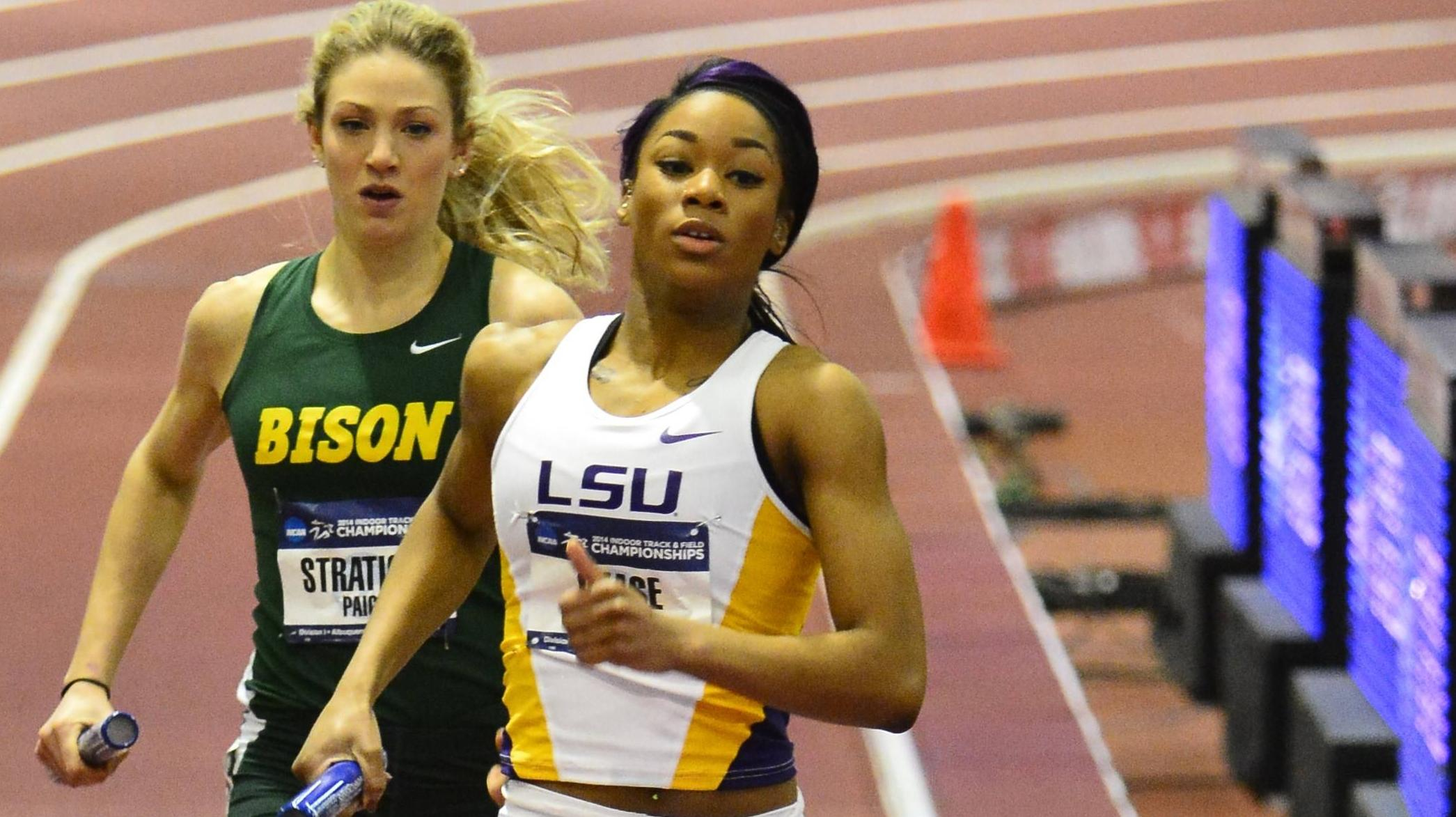 CORAL GABLES, Fla. – Junior Chanice Chase and freshman Jada Martin turned in the performances of the day for the LSU Track & Field teams as each cracked the Top 5 in the NCAA rankings this season during Saturday’s action at the 2014 Hurricane Alumni Invitational held at Cobb Stadium on the campus of the University of Miami.

Chase smashed her personal best with a clocking of 57.31 seconds to win the women’s 400-meter hurdles, while Martin sprinted to a wind-aided career best of 22.96 for the runner-up place in the women’s 200-meter dash as they were among 17 persona-best performances turned in by the Tigers and Lady Tigers during Saturday’s competition.

The LSU Track & Field teams also walked away with 13 event wins on the afternoon as they now reach the midway point of their regular season outdoors in preparation for the championship season.

Chase lined up in the 400-meter hurdles as the NCAA’s No. 8-ranked performer this season after she set her previous personal best of 57.67 in a third-place finish at the Texas Relays back on March 28. She eclipsed her previous best by nearly four tenths of a second on Saturday afternoon when she crossed the finish line in 57.31 ahead of LSU’s senior All-American Nikita Tracey in second place at 57.65.

Chase climbed three spots into the No. 5 position in the national rankings as she leapfrogged Tracey on the list 2014 . Tracey is also among the NCAA’s Top 10 hurdlers at No. 7 with her best this season of 57.53.

Martin followed Chase by turning in a Top 5 performance nationally in the very next event when she sprinted to the finish line with a windy 22.96 (+2.4) to take the second heat with the second-fastest time for the day while climbing into the No. 4 spot in the national rankings during her rookie season. Sophomore teammate Kiersten Duncan followed in second place in the heat and third place overall after racing to a wind-aided PR of her own at 23.40 (+2.4) to crack the NCAA’s Top 20 at No. 17 nationally under all conditions.

They followed Lady Tiger great and emerging international sprint star Kimberlyn Duncan in the final 200-meter standings as the former NCAA Champion set a wind-legal seasonal best of 22.53 to win the first heat.

Lady Tiger senior Jasmin Stowers continued her march toward the NCAA Championships with an impressive victory in the women’s 100-meter hurdles as she ran the second-fastest wind-legal time in the NCAA in 2014, taking the title by more than six tenths of a second with a run of 12.92 (+1.9) ahead of the 13.56 turned in by Miami’s Jamika Glades.

Senior sprinter Shermund Allsop was the lone Tiger to break into the NCAA’s Top 20 for the first time this season with his performance as he sprinted to a wind-legal seasonal best of 20.74 (+1.4) for second place in the men’s 200-meter final, trailing only the winning time of 20.59 by Mizuno’s Ramon Miller in the first heat. Allsop’s 20.74 ranks No. 17 nationally under all conditions in the event for the 2014 season.

Junior Vernon Norwood trailed Allsop with a wind-legal personal best of 20.82 (+1.2) for fifth place, while freshman Tremayne Acy clocked a career-best wind-aided time of 20.90 (+2.1) for sixth place in the event.

Allsop ran the second leg for the Tigers in the 4×100-meter relay as he teamed with junior Joshua Thompson, Acy and junior Trevor Sansone in winning the first event of the day with a run of 40.21, while he also turned in a seasonal-best wind-legal time of 10.42 (+1.3) for second place overall in the men’s 100-meter final for an outstanding performance during Saturday’s invitational.

The Tigers and Lady Tigers kicked off this year’s Hurricane Alumni Invitational with a flurry of wins in the field events as freshman Rebekah Wales got the ball rolling with a win in the women’s javelin with a top throw of the day at 158-8 to take the event crown. Senior All-American Denise Hinton followed with a win in the women’s hammer throw as she uncorked a series-best of 204-11 just one week after setting a new school record of 209-6 en route to earning SEC Women’s Field Athlete of the Week honors on Tuesday of this past week.

Junior Jeremy Tuttle made it a sweep of hammer throw titles on Saturday with his winning mark of 209-3 in the men’s final, while fellow junior Rodney Brown won the men’s discus throw with a mark of 203-0.

Senior All-American Keri Emanuel led a 1-2-3 sweep by the Lady Tigers in the women’s triple jump as she jumped a series-best of 41-11 ¼ to take her first triple jump title of 2014. Senior Lynnika Pitts followed in second place with her top jump of the day at 41-1 ¾w, while freshman Nataliyah Friar nearly matched her wind-legal personal best with a jump of 40-9 ½ for third place overall.

The Tigers (3:08.91) and Lady Tigers (3:37.99) later wrapped up the meet with a sweep of 4×400-meter relay titles to put an exclamation point onto the end of this year’s Hurricane Alumni Invitational.

Despite coming up just short of winning the women’s discus crown on Saturday afternoon, Lady Tiger junior Tori Bliss raised her personal best in the event by nearly six feet as she unleashed a new career best of 168-6 on her final throw to take second place in the event. Bliss actually set back-to-back personal bests on the day as she followed a throw of 164-1 in the fifth round with her best of 168-6 in the final round of the event.

The Tigers and Lady Tigers return home next weekend for their second home meet in three weeks as they play host to this year’s LSU Alumni Gold on April 19 at the Bernie Moore Track Stadium on LSU’s campus. They will then follow with their annual trip to Philadelphia, Pa., on April 24-26 to compete in the 120th running of the Penn Relay Carnival being held at Franklin Field at the University of Pennsylvania.