Final Round of Women's Golf Rained Out; LSU 2nd 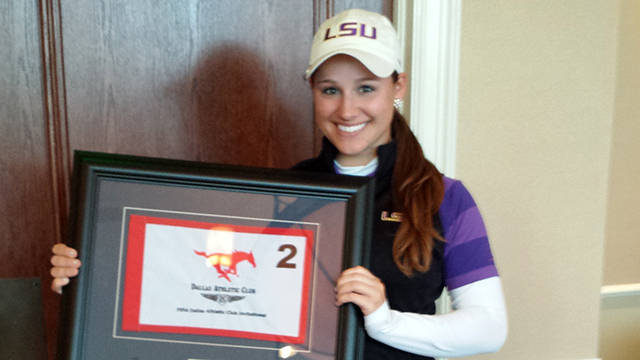 DALLAS – The 18th-ranked LSU women’s golf team’s final round of the regular season was cancelled because of weather conditions after two holes of the SMU/DAC Invitational Sunday morning.

The 16 teams were scheduled to play a shotgun start round beginning at 8:30 a.m., but that start was delayed for about an hour before play began. However, after two holes, more rain and lightning stopped play and with travel considerations for some of the teams looming, the round was cancelled.

The Lady Tigers finished second as a team in what became a 36-hole competition, finishing with a score of 595, four shots behind winner Baylor at 591. North Carolina took third.

Freshman Carly Ray Goldstein, in just her third tournament for the Lady Tigers posted back-to-back rounds of 73 on Friday and Saturday to finish in a tie for second in the individual competition. Goldstein finished in a five-way tie for second at 2-over 146. Elizabeth Mallett of North Carolina was declared the individual winner at 3-under 141 after rounds of 72 and 69.

Goldstein, who had three-birdie son her round, is at 2-over 146 in five-way tie for second at the position with Elizabeth Mallett of North Carolina the individual leader at 3-under 141 after rounds of 72 and 69.

LSU’s next event is the annual Southeastern Conference Tournament at Greystone Country Club in Birmingham, Ala., April 18-20.