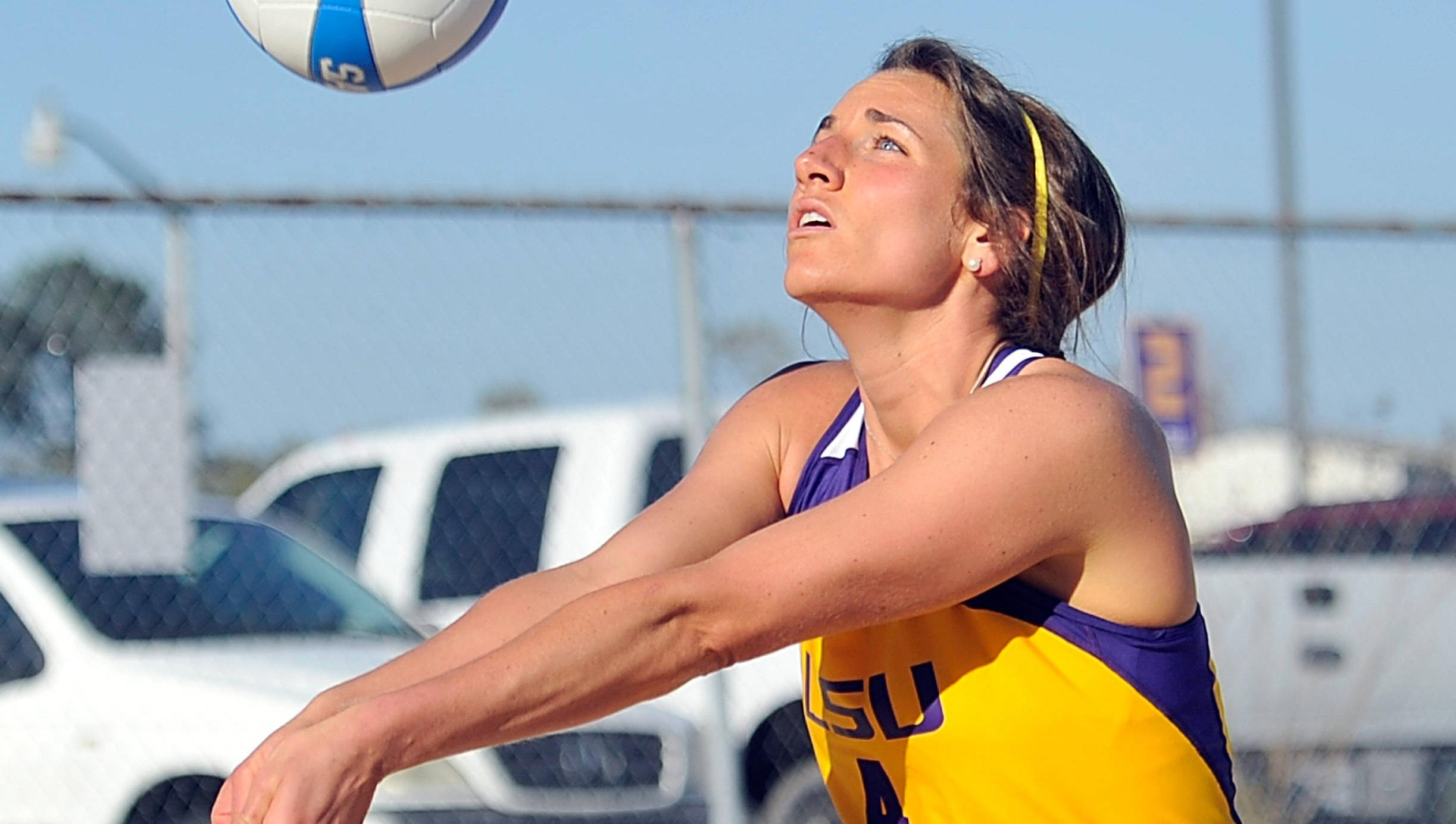 “Today was a tough day,” associate head coach Russell Brock said. “We wanted to come out and win both matches, and we did not do that. We had plenty of chances, but we just could not finish.”

Against Florida Gulf Coast, Briana Holman and Mimi Eugene set the tone for victory as the court-four pair quickly took their match 21-15, 21-10 over the Eagles’ Marlene Moeller and Madi Wilcox.

The Emma Hiller and Malorie Pardo combination tallied a 21-15 first-set victory and held a second-set lead, but Florida Gulf Coast’s Katie Gutmann and Shelby Joslin rallied to take the set 24-22. Advancing into game three, the Eagles’ momentum did not let up, and Hiller and Pardo fell 15-11.

Court three gave Florida Gulf Coast its second and final point of the match. Down to the third set, Victoria Boraski and Cati Leak kept a tight score but fell 15-11 to the Eagles’ Karina Mambuca and Vanessa Benke after a 21-15 first-set win and 21-18 loss in set two.

After falling 21-15 in the first set, the No. 2 pairing of Helen Boyle and Kaitlin Hatcher retaliated to take the second set 21-18 and the third game 15-11 against Karina Mambuca and Vanessa Benke.

With a tied score, the top-spot team of Meghan Mannari and Katie Lindelow pulled through for the Tigers to record a 21-16, 21-9 victory and clinch the match for LSU.

Against Florida Atlantic, the court-five pair of Hiller and Laura Whalen battled through a first set and came out victorious 23-21. The duo advanced to the third set after falling 21-7 in the second but was unable to hold on and fell 15-9 to the Owls’ Kristi Tekavec and Lexi Rhein.

Hatcher and Boyle recorded their second victory of the day with a 21-15 first-set win and a dominating 21-7 second set against Florida Atlantic’s Natalie Fraley and Beth Shoaff.

The Owls’ second point was notched as Holman and Eugene fought through three sets on the tails of Florida Atlantic’s Megan Knapp and Mandy McIntosh, ultimately falling 21-17, 18-21, 15-6.

Mannari and Lindelow tallied LSU’s second point of the day with a quick 21-7, 21-14 win over Florida Atlantic’s Sataric and D’Amato in the top spot.

With all eyes on court three, Boraski and Pardo teamed up to notch a 21-17 first set and proceeded to the third after falling 21-15 in the second. In a thrilling third set, the score tied up at 15-15 and the Owls’ Gabby Pyle and Andie Galinis pulled away to clinch the match with a 17-15 third-set victory.

“We lost three matches in the third set against FAU and two matches in three sets against FGCU,” Brock said “We have to go back and watch some film to figure out how we can be better in those tight matches. Thankfully, we were able to pull out the FGCU match, but we had to shuffle the lineup a bit against FAU and could not survive the adjustments. Megan, Katie, Kaitlin and Helen all played great and won convincingly in their matches today. They are doing a great job leading our team.”

Khourtni Fears and Whalen also competed in an exhibition match against Florida Gulf Coast’s Natalie Martinez and Morgan Crawley, and the Tigers walked away with a 25-18 win.

To wrap up the tournament, LSU will compete in a pairs tournament Sunday that will kick off at 7 a.m. CT.