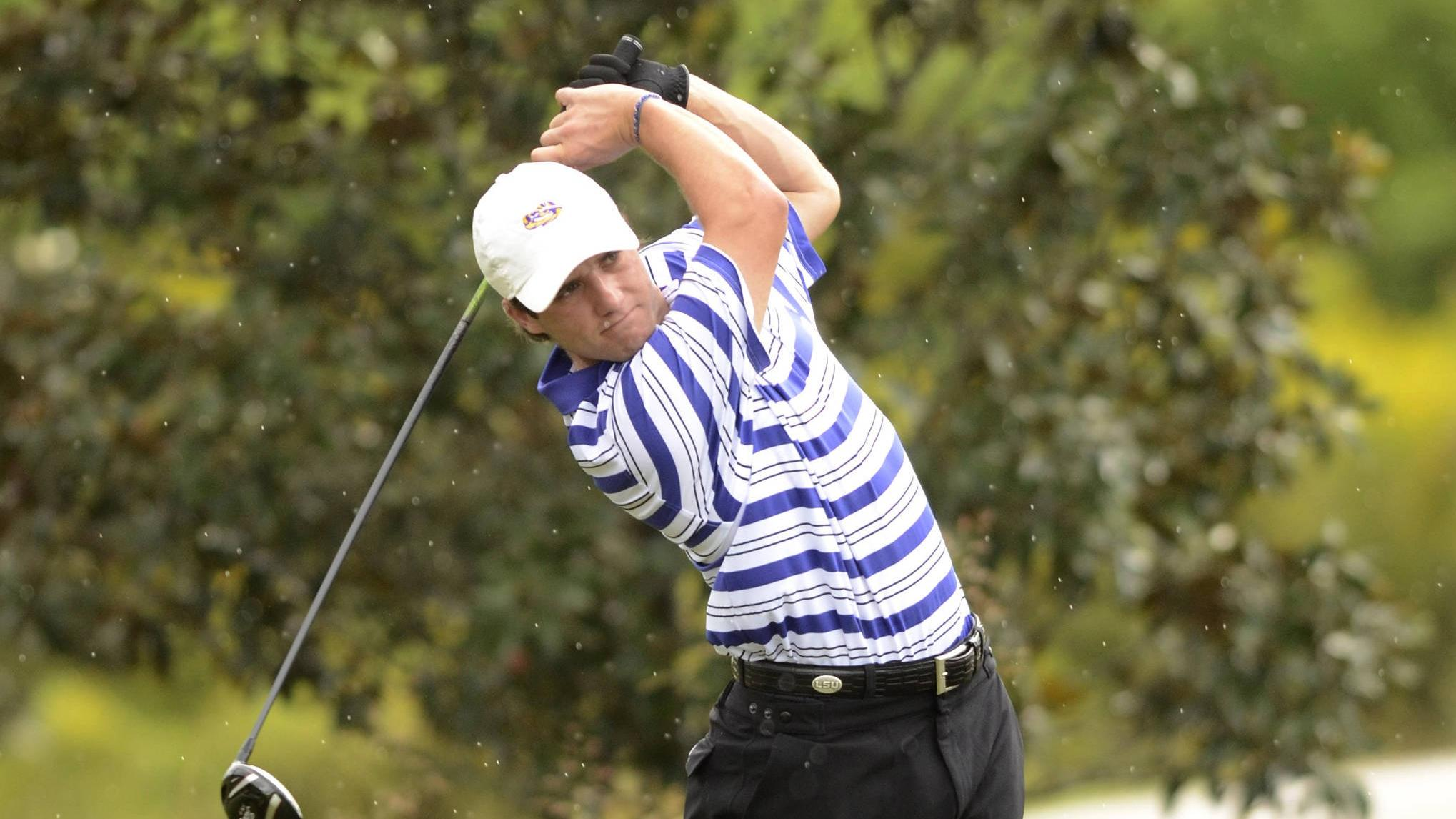 BRYAN, Texas – The 25th-ranked LSU Tigers have risen to the top of the charts through 36 holes at this year’s Aggie Invitational after posting a team score of 15-over par 591 during Saturday’s action at The Traditions Club as they will take a one-shot lead over the 16th-ranked Texas A&M Aggies into Sunday’s final round of their regular-season finale.

The Tigers followed a 10-over par 298 in the morning with a 5-over par 293 in the afternoon to headline the 12-team field and put them in position to win their first team title of the 2013-14 season.

While the Tigers hold a narrow one-shot lead over the tournament host Aggies heading into the final round, the Texas Tech Red Raiders follow six shots back in third place with a 36-hole score of 21-over par 597, while the No. 2-ranked Oklahoma State Cowboys trail seven shots back in fourth place at 22-over par 598 and the Kent State Golden Flashes round out the top five 11 shots back in fifth place at 26-over par 602.

Setting the pace for the Tigers during Saturday’s opener at the Aggie Invitational was junior Ben Taylor, who fired an even-par 72 in the first round and a 2-over 74 in the second round for his 36-hole score of 2-over 146 that tied him for fifth place on the leaderboard on the opening day of the competition.

Taylor faces a five-shot deficit in the race for the individual title with just one round to play after California’s Brandon Hagy was one of just two golfers in the field of 71 to break par on the afternoon.

After opening the tournament with a 1-under 71 in the first round, Hagy followed with a 2-under 70 in the second round to grab a two-shot lead over Texas A&M’s Ben Crancer at 3-under par 141 for the championship. Crancer finished in second place at 1-under 143, followed by Texas Tech’s Clement Sordet in fourth place at even-par 144 and Oklahoma State’s Ian Davis in fourth place at 1-over 145.

Taylor was one of three golfers to tie for fifth place at 2-over 146 after 36 holes as he joined California’s Shotaro Ban and Texas A&M’s Greg Yates in the top five of the individual leaderboard at the Aggie Invitational.

Taylor is poised for a second top-10 finish in 2014 after opening the spring season by tying for seventh place at The Prestige at PGA West for his best finish in four previous appearances as an LSU Tiger. That is when the England international fired his best tournament score of the season at 4-under par 209 to tie for seventh place in the event held at the Greg Norman Course at PGA West in La Quinta, Calif.

Two other Tigers cracked the Top 20 of the leaderboard during Saturday’s action as juniors Stewart Jolly and Curtis Thompson matched one another with two-round totals of 5-over par 149 to tie for 16th place.

Jolly matched Taylor with the lowest score of the day with a team-leading even-par 72 in the afternoon after opening the tournament with a 5-over par 77 in the morning round. Thompson followed his 2-over par 74 in the first round with a 3-over par 75 in the second round to finish the day tied with Jolly for 16th place along with two other golfers in the field.

Senior Smylie Kaufman carded LSU’s second-lowest score in the first round with an opening 2-over 74 before ending his day with a 5-over 77 to tie for 23rd place overall at 7-over par 151 heading into the final round.

After opening the tournament with a 7-over 79 in the first round, junior Myles Lewis added the team’s second-lowest score in the second round with a 1-over 73  to tie for 26th place at 8-over par 152 after 36 holes.

The Tigers are certainly peaking at the right time of the season as a strong finish at the Aggie Invitational would propel them into the championship season with the 2013 SEC Men’s Golf Championships returning to the Seaside Course at Sea Island Golf Club in St. Simons Island, Ga., from April 25-27. They are poised to wrap up the regular season with another strong finish following a second-place finish at the Louisiana Classics held on March 10-11 and a fourth-place finish at the Valspar Invitational at Floridian held on March 24-25.

The Tigers will tee off in the final wave off the front nine during Sunday’s final round as they are paired with Texas A&M and Texas Tech with tee times beginning at 8:40 a.m. CDT on hole No. 1. Golfstat will provide live scoring of the third and final round of this year’s Aggie Invitational as fans can follow the Tigers in action at www.golfstat.com.