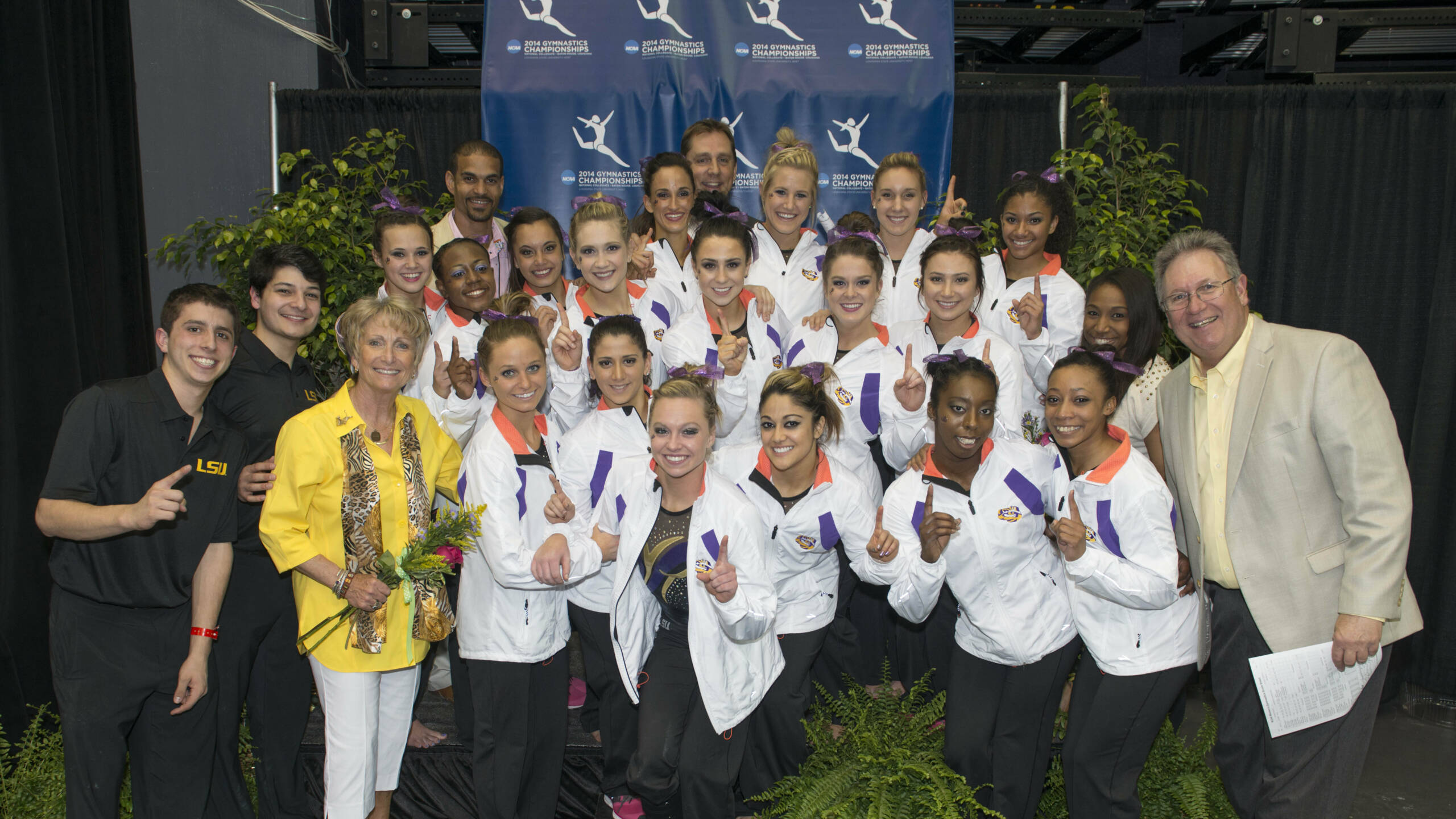 BATON ROUGE – From the start to the finish the third-ranked LSU gymnastics team dominated the NCAA Baton Rouge Regional as the Tigers tallied a school-record 198.325 that ties as the nation’s highest score this season to capture the regional title Saturday in the Maravich Center.

“The regional meet is always one of the most intense and competitive events every year, and I am so pleased with how we competed and performed tonight,” LSU head coach D-D Breaux said. “The crowd was into the meet from the start to the finish, and it made for a really fun and exciting atmosphere in the arena.”

LSU set the school record on vault with a 49.650, and the Tigers also posted the second-best beam total in program history with a 49.600 and the third-best floor score with a 49.650.

“It’s nice for us to be able to compete like we did with consistency, confidence and attitude,” Breaux said. “The kids took so much of what we’ve done over the last two weeks after SEC’s and really ingested it and owned it, and I saw the product of hard work tonight.”

Rheagan Courville won her eighth all-around title of the season with a 39.725, and she also captured the beam title with a career-high 9.975 and tied for the vault title with a 9.95.

Lloimincia Hall scored her third perfect 10.0 on floor of the season and the fifth of her career to win the title, and she now has 24 career floor titles which rank third in LSU history.

LSU opened the meet with a 49.425 on bars, highlighted by 9.90s from Kaleigh Dickson, Randii Wyrick and Morrison. The Tigers also received a 9.875 from Jessie Jordan and 9.85s from Courville and Britney Ranzy.

LSU only competed five gymnasts on vault after Dickson was scratched with an injury. Jordan and Ranzy started the rotation with back-to-back 9.90s before Gnat tied her career high with a 9.95. Morrison and Courville stuck vaults as well to tie Gnat with 9.95s to end the meet and secure the victory for the Tigers.

A raucous crowd of 5,915 fans took in the meet, an attendance figure that ranks sixth in LSU history.

LSU will be back in Birmingham at the BJCC Arena for the second time this season when the Tigers compete at the NCAA Championships starting on April 18. LSU also competed there for the SEC Championship on March 22.

Opening statement…
“The Regional is such a hard event to host because of the logistics of all the teams on the floor at the same time and all the officials and so many things going on at one time. For us to be able to have this kind of performance and this kind of crowd and university support was really one of the things that pushed this team to give us the incredible performances we had today. I can’t say enough good things about [LSU coordinator of event/game management] Jon Allen and [LSU associate sports information director] Jake Terry and the people who worked so hard to put this event on.”

On if she wanted a certain score…
“Not at all. In this kind of competition where two teams advance it’s not about the score you earn but about how well you do. I know now what the other scores were around the country, and we performed really well. Probably as good as this team is able to compete. What we need to do is focus on the process that we followed to get here. The nature of this meet is such a pressure packed thing. It’s nice for us to be able to compete like we did with consistency, confidence and attitude. The kids took so much of what we’ve done over the last two weeks after SEC’s and really ingested it and owned it, and I saw the product of hard work tonight.”

On Kaleigh Dickson‘s injury…
“Dr. [Brent] Bankston won’t know for sure until Kaleigh gets an MRI and he can see her again tomorrow. We are guardedly optimistic we can get her back on bars. Right now I’m optimistic that we will have her at the national championships and she will lead off our bar lineup.”

On how confident she was in Jessie (Jordan) stepping up as leadoff on vault after the scratch…
“When Kaleigh saluted the judge, we couldn’t make a substitution at that point. So Jessie would be the first person if we lost Kaleigh and she can’t perform at nationals. Jessie would be that first person, but vaulting is an event where we have a little bit of depth. And floor, we pulled Kaleigh out of floor tonight to save her foot for nationals. Then, she pushes off and hurts it before she even vaults.”

On how Jessie (Jordan) set the tone…
“She really stepped up and rocked the house. That’s the vault she gave us at SEC’s. If we get that kind of performance the next couple meets of the season, I think we’ll be in a very, very good place. And we’ve got a little bit of depth on vaulting. We can vault a couple other people and do a good job. It’s bars and beam that Kaleigh (Dickson) really gives us that rock solid performance.”

On how Jessie (Jordan) bounced back after the disappointment of SEC’s…
“It’s just like any sport. You’ve got to shake it off and get up and move. She did, and she walked away from it and left that in Birmingham. She trained better in the last two weeks and because of that, and a lot more focus, it became to where her beam routine was straight memorization. I think it gave her a little jolt, a little attention getter. I changed a little bit of our approach on how we trained, and the whole team responded well to the changes we made in practice. So we’ll go back to what we did preparing for this meet to prepare for nationals.”

On breaking the school record with their score…
“Momentum is a very powerful medicine, and these kids started lapping it up. The crowd got behind them, and they kept grabbing that momentum. They kept moving with it and they were just not to be denied tonight. So we’ve got to let them decompress a bit and start back Tuesday slow.”

On if she will use the disappointments of SEC’s to motivate them going back to Birmingham…
“I don’t think I will, and I don’t even want to talk about it (with them). That’s what happened two or three weeks ago, and I think that using this meet as a spring board and platform to move forward. This team is very resilient and they have a whole lot of desire. They love LSU and they love the traditions they have contributed. The thing I tell this team all the time is that traditions and records don’t leave; they stay here. You are creating a platform for the next group and they live that every time they step out onto the floor.”

On which event specifically excelled tonight…
“I thought bars were fabulous, but when you’re under the kind of pressure that you’re on at this meet, you’ve got to hit to qualify at nationals. If you don’t hit, you stay home. That’s in their heads and they go to beam and rocked the house. They really showed the kind of beam that we train and what we do; I’m just really proud. With two freshman in that lineup, are you kidding me? They did a great job.”

On Ashleigh Gnat‘s performance tonight…
“She’s so powerful. She just gets so excited with what she is doing. She doesn’t need to be some hyped up super woman because she’s got more pop in those legs than anybody I think I’ve ever coached. If you get her settled down, she is amazing. What a beautiful beam tonight. That vault was pretty special too. I think somebody gave her a 10. It was pretty amazing.”

On her motivation…
“The SEC tournament really refocused and motivated me to work hard in the gym so I could come out and compete well. Leading up to this meet we had really good practices, and I think it shows in our competition.”

On the pressure she felt after Kaleigh scratched from vault…
“Not much pressure. Whenever someone falls, someone else has to step in and that’s exactly what I did. I felt great about stepping up and coming to the plate and performing well. It was good.”

On the importance of this meet after the SEC competition…
“We needed to just believe in ourselves. SEC’s were just a realization that when we’re not hyper focused on making something happen and we just go out there relaxed, we do what we have been training. We did exactly that after this great week of training that we had. We were in a great mental state, and it really shows how much that paid off.”

On unfinished business left in Birmingham…
“We know that what we left in Birmingham is not all that we have and we have trained ourselves to be able to go back in that arena and forget that anyone else is in there but us. We need to trust our training and trust what we’ve done to this point because it will get us where we want to be.”

On the environment…
“It was exciting. We had our fans making the momentum even stronger and it was just the most amazing environment I could’ve pictured. I think it happened perfectly. We had stick after stick, and we were cheering and it was fun. I just loved every second of it.”

On what was going through her head as she landed on vault…
“We had such a great lineup in front of me and I was seeing stick after stick. D-D always says there is so much power in building up momentum, and it is so true. I was so excited watching everybody in front of me. I just did what I normally do in practice and what I normally do when I see my teammates stick it, and I just tried to do the same. I felt really excited and proud of what we did as a team.”

On using this experience at the NCAA Championships…
“I think going into nationals we will remember how loose we felt and how confident we felt going into this meet and try to draw that energy and stay in the ‘Purple Zone’ and compete like we did tonight. The ‘Purple Zone’ is our zone that we get in where we are focused on our teammates and ourselves where we focus on what we can do as an individual for the team.”

On her mindset for the beam routine…
“I don’t think I had butterflies going into my beam routine. I looked at D-D and she was just like, ‘OK have fun.’ I got on the beam, and it was  a lot of fun. I tried to put the past behind me and move forward, and I did that.”

On the difference of performing in front of a crowd…
“I think it’s exciting. I like when a lot of stuff is going on, and I think the rest of the team does too. We practice with just ourselves. We love having a crowd watching us, and I just think it’s exciting to demand the other team’s attention also. I think our performance does that wherever we are, and we are proud of that.”