No. 3 Gymnastics Looks to Advance at NCAA Regional 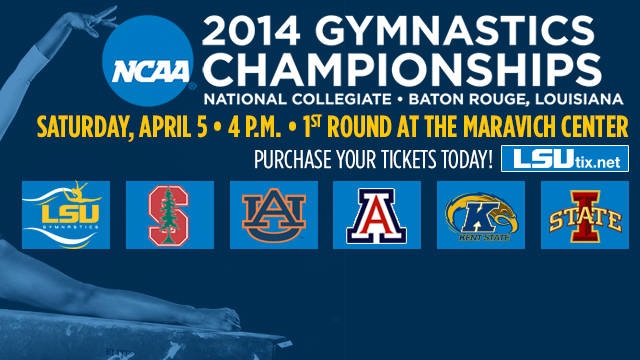 BATON ROUGE – For the first time since 2008, the third-ranked LSU gymnastics team will host an NCAA Regional as the Tigers duel with five other outstanding teams at 4 p.m. CT Saturday in the Maravich Center.

LSU (15-5) is the nation’s No. 3 overall seed, and the Tigers will face off against No. 10 Stanford, No. 13 Auburn, Arizona, Kent State and Iowa State. The top two teams will earn a berth in the NCAA Championships that will be held in Birmingham, Ala., on April 18-20.

It marks the first time LSU has hosted an NCAA Regional since 2008 when the Tigers captured the regional title and eventually advanced to the NCAA Super Six for the first time in program history.

Tickets are available by visiting http://www.lsutix.net/, and information on the regional can be found at the regional central homepage at http://lsul.su/14ncaagym.

“We have had a great two weeks of practice, and we are excited to begin the NCAA postseason in front of our fans,” LSU head coach D-D Breaux said. “Our regional has six great teams, so it is going to be an intense, fun competition. We just have to relax, stay in the process and do our gymnastics, and hopefully we will be one of the two teams moving on to nationals.”

LSU enters the regional after a school-record 10 straight meets with at least a 197 score, including a 197.325 last week at the SEC Championship, and the Tigers will match-up against Auburn for the third time this season and Arizona for the second. LSU is 2-0 this year against Auburn and 1-0 versus Arizona.

LSU is ranked in the Top 5 nationally in all four events, including the No. 1 ranking on vault. Stanford is as high as No. 5 on beam, and Auburn’s best ranking is 11th on vault and floor. Arizona is 14th on vault and bars, while Kent State is 25th on floor and Iowa State is outside the Top 25 in every event.

Five Tigers are ranked in the Top 25 in at least one event with Rheagan Courville ranked in all four events and No. 2 in the all-around. Kaleigh Dickson, Lloimincia Hall, Jessie Jordan and Sarie Morrison are also ranked for LSU.

Arizona (Kristin Klarenbach), Kent State (Marie Case) and Iowa State (Camille Santerre-Gervais) all have one gymnast ranked in the Top 25 in at least one event.

Live video is available free of charge in the Geaux Zone at www.LSUsports.net/live, and live stats will also be available at LSUsports.net

Fans can connect to LSU gymnastics through the Tigers’ social media accounts: @LSUgym on Twitter, www.Facebook.com/lsugym and @LSU_gym on Instagram.