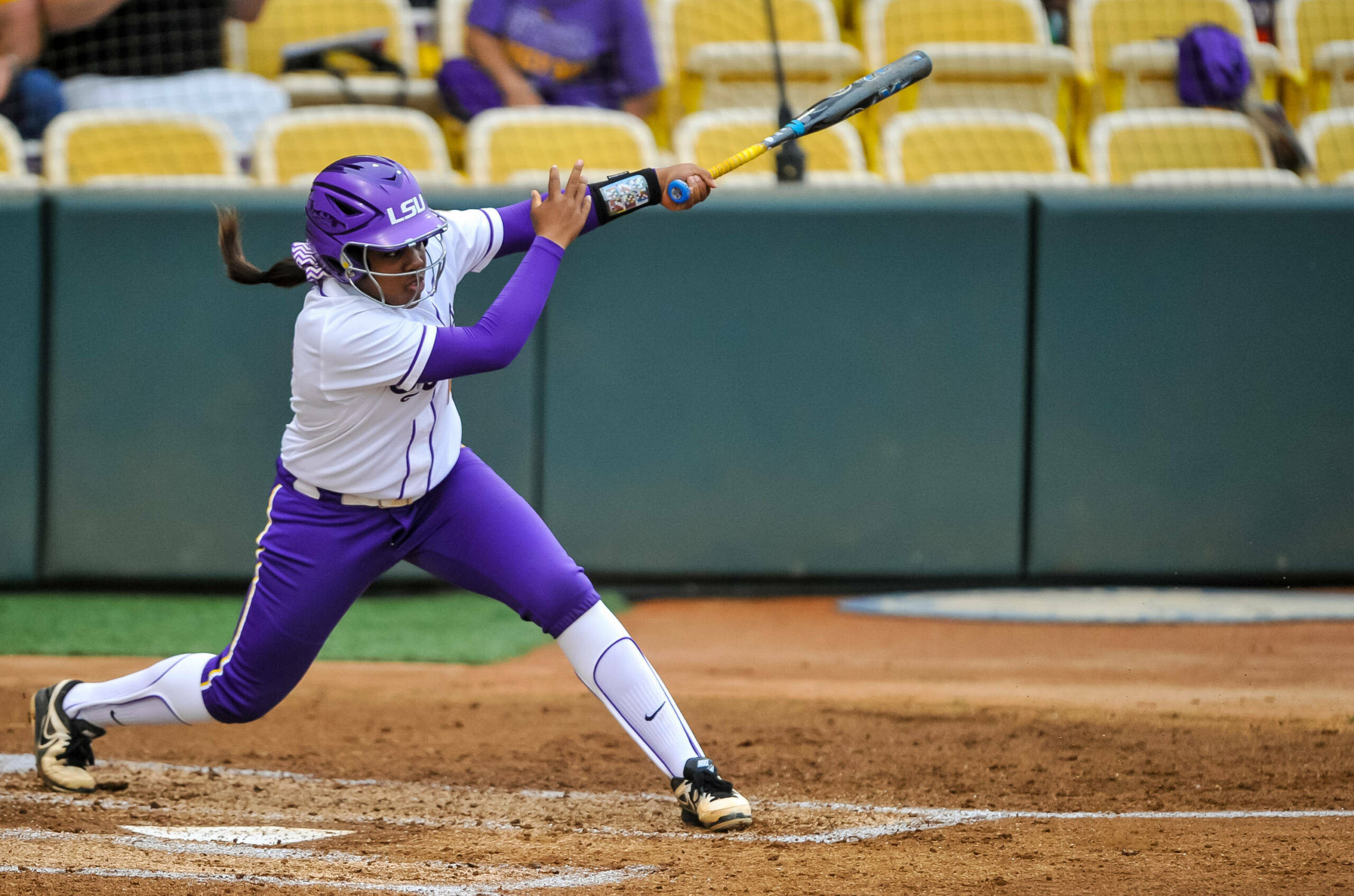 UPDATE: Saturday’s game 2 has been moved from 6 p.m. to 4 p.m. CT due to anticipated rain.

BATON ROUGE, La. – Down by a run with its final three outs left, the LSU softball team was staring down another heartbreaking loss until an RBI single by Sahvanna Jaquish and three-run home run by Bianka Bell gave the Tigers a 7-4 walk-off win over the No. 2 Tennessee Lady Volunteers in the bottom of the seventh inning Friday night in the series opener between the two teams at Tiger Park.

Plagued by miscues that allowed four unearned runs to cross the plate in consecutive innings early, the Tigers (21-15, 3-7 SEC) were being outhit by the Lady Vols (31-4, 8-2) 7-4 up until the final inning when the team got three as A.J. Andrews led off with a single to kick start the LSU rally that snapped a five-game SEC losing streak this season and seven-game losing streak to UT that stretched back to the 2010 season.

“That has to be one of my favorite wins here since I’ve been the coach at LSU,” head softball coach Beth Torina said. “A lot of things we have struggled with this season came together and resulted in what we are trying to do every day right there. The kid who has had trouble scoring people steps up and gets the big hit that she is capable of hitting and we know she is capable of hitting. It was a really fun win for this team.”

Bell, who committed an error that allowed the first two Tennessee runs to score in the second inning, made good and came through when it counted most as she finished 2-for-3 with three RBI on her seventh home run of the season and a run scored to cap the team’s sixth comeback win of the season and give Tennessee starter Ellen Renfroe her first loss of the year.

“That was definitely a shock for me,” Bell said. “I have been in pressure positions like that before, and I couldn’t come through. Now that I know I can come through, I can keep it going for the rest of the year.”

Not to be outdone, but it seemed that leadoff junior outfielder A.J. Andrews would be the hero of the night as she stepped to the plate in the third and drilled her first home run of the season to put LSU up 3-2 as she finished the night 2-for-3 with three RBI and two runs scored. Jaquish was one of six Tigers to have at least one hit on the night with an RBI, as Jacee Blades, Allison Falcon and Simone Heyward each had one with a run scored.

“That was exciting,” Andrews said. “I was so amped up and ready to hit. I was ready to go. I just swung and it went over.  I was so pumped.”

After taking a pair of tough losses, LSU starter Ashley Czechner did everything possible to keep the team in the game and came out on the other side with her seventh victory of the season after scattering seven hits with four runs, all unearned, with two walks and two strikeouts. For UT and USA Softball Player of the Week in Renfroe, she was tagged for all seven runs on eight hits with two walks and a strikeout, matching season highs in runs and hits allowed, and season low in strikeouts to fall to 21-1.

After getting through the first two batters with relative ease, the Tigers began to put things in motion when Jaquish reached on an error at third base. Bell followed that up with the first base knock of the contest with a high-chopping single through the left side to put two on for LSU in the very first inning. With LSU seeming to put something together early, an infield grounder to the shortstop ended the inning.

With two outs and one runner on for the Lady Vols, a single put two on for Tennessee in the top of the second inning. A walk on five pitches loaded the bases, as the inning looked to be coming to a close on a grounder to short but an error on the attempted forced out at second allowed two runs to score to put UT ahead on a pair of unearned runs. With runners at the corners, a stolen base and walk put three more back on for Tennessee, but a fly out to center ended the inning.

With UT going on top, the lead would be short lived as Falcon earned an infield single by beating out the throw from second. After an out to left field, Heyward singled in the infield and it allowed Falcon to motor to third to put runners at the corners for the Tigers. Heyward would steal third, but both runners would get an easy trot in as Andrews sent a screamer to right center putting LSU on top 3-2. Blades would also single on the next play, but was left stranded as a grounder to third ended the inning.

Three consecutive singles by Tennessee loaded the bases in the top of the third, but the Tiger defense came through big as Falcon scooped up a grounder and threw out the lead runner at home with Kellsi Kloss throwing out the batter at first for the big double play. A line-drive to left was supposed to be the sure out to end the inning, but another error with the ball dropping out of the glove allowed two more unearned runs to cross giving UT the lead back at 4-3. Another single put runners at the corners, but a deep fly to center ended the frame.

After going down in order in the fifth and sixth inning, Andrews singled down the right field line to take first. After moving to second after a walk to Blades, Jaquish hit a shot to left and scored Andrews from second to tie the game at 4-4. On the second pitch of her at bat, Bell reared back and hit a no-doubter to the berm in left center for the fourth run on the frame’s third hit.

“We love playing at home in front of our fans,” Czechner said. “We have had a really tough schedule, but we have been close in almost every single game. We are going to turn the corner and get the wins we need.”

On tonight’s victory over No. 2 Tennessee…
“That has to be one of my favorite wins here since I’ve been the coach at LSU. A lot of things we have struggled with this season came together and resulted in what we are trying to do everyday right there. The kid who has had trouble scoring people steps up and gets the big hit that she is capable of hitting and we know she is capable of hitting. It was a really fun win for this team.”

On Bianka Bell‘s walk-off home run…
“How cool it is that Bianka (Bell) gets pulled defensively, but still has the guts and presence to stay in the game. She didn’t pout about it. She understood what she could do to help the team tonight and step up and hit the ball. What a great example of what it means to be apart of this program.”

On fighting back to win the game in the seventh inning…
“We have done that so many times this season. We have almost found a way to lose instead of finding a way to win. We have been on them time and time again to be the ones to gut it out and win by one run. With eight one-run loses, it has been really tough. It is nice to see them step up and find a way to fight back. Errors happen. We work on that, but they happen. Being able to come back from that shows so much more.”

On Ashley Czechner‘s pitching performance tonight…
She did a great job. Her last two starts she has done a really good job. I feel like she has earned the Friday night start. She is doing exactly what we need our senior to do, stepping up and leading this team on the mound.”

On LSU’s defense beginning of the game…
“Errors happen. You just have to battle back from that. This team has so much fight, and I have so much confidence in my offense that they could come back despite the errors.”

On the advantage of returning to Tiger Park to play Tennessee…
“We love playing at home in front of our fans. They have so much energy, and that allows us to play with so much passion. It fuels our energy and keeps us up. When they get mad at the umpires, it fuels us and drives us that much more. We have had a really tough schedule, but we have been close in almost every single game. We are going to turn the corner and get the wins we need.”

On her first home run of the season…
“That was exciting. I was so amped up and ready to hit. I was ready to go. I just swung and it went over.  I was so pumped.”

On her hitting performance tonight against…
“My mentality when I got up to the plate was to be ready for anything. The saying goes yes, yes, no. You have to go until the yes is a no. I was ready to go. I was looking for a strike. The first pitch was a strike, and I swung.”

On her walk-off home run to defeat Tennessee…
“That was definitely a shock for me. I have been in pressure positions like that before, and I couldn’t come through. Now that I know I can come through, I can keep it going for the rest of the year.”

On being pulled from shortstop…
“I was struggling defensively, and Coach (Torina) took me out. I thought in my head and told myself not worry about it. Just relax and take all my aggressions out on my at-bats and score runs for my teams.”

On coming through for her teammates…
“I was running faster than A.J. has ever ran. It was a really good feeling. My teammates never let down on me. They believed in me to come through for them. I was hyped up and fired up about that.”