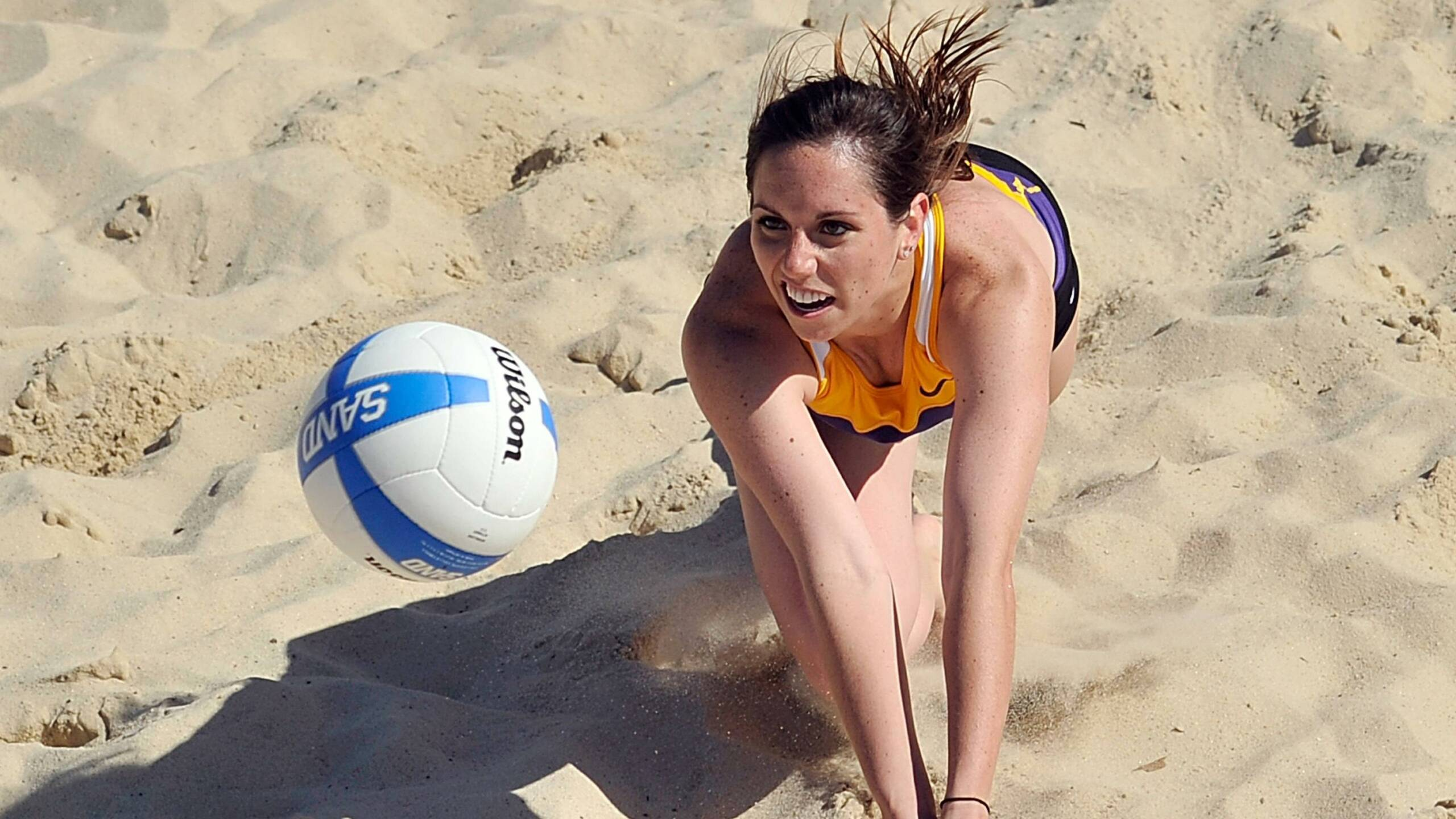 Wrapping up the day’s competition, the court-one pair of Meghan Mannari and Katie Lindelow were looking to finish strong. Quickly taking the lead, the pair pulled away from No. 7 Florida International’s Jessica Gehrke and Jessica Mendoza and tallied a 21-8 first-set triumph. In a much closer second set, Mannari and Lindelow took the lead initially, fell behind the Panthers, then retaliated to take the second set 21-19 and record LSU’s lone point of the match.

“The bright spot in the match against FIU came from Meghan and Katie,” associate head coach Russell Brock said. “They absolutely controlled their match. It really seems that they turned a corner today, and I’m looking forward to seeing how they carry this momentum through the next few matches.”

During the tournament, all matches began with seeds four and five. As competition completed on a court, then the third, second, first and sixth seeds competed in that order.

Emma Hiller and Briana Holman kicked off the day as they made their court-four debut against North Florida’s Britt Claessens and Julie Trembley, and the pair gave the Ospreys the first point of the day after falling 21-9, 21-12.

Malorie Pardo and Mimi Eugene started competition with a 21-14 first-set loss in the No. 5 spot, but the duo retaliated and took a 21-16 second set to advance into the third game of competition. Unable to hold on, the duo fell 15-7 to the Ospreys’ Emily Strack and Allison Shirley in the third and brought North Florida within a point of clinching the match.

Court three gave LSU its lone point of the day. Victoria Boraski and Cati Leak tallied a 21-18 first-set win, and Leak followed with four-straight early aces over the Ospreys’ Tanner Garbutt and Cameron McGuire. Boraski kept the momentum up as she recorded back-to-back aces to take the match 21-18, 21-9.

Kaitlin Hatcher and Helen Boyle fought hard through three sets. The duo took the first game 21-17 before falling 21-14 in the second. In the third, Hatcher and Boyle stayed neck and neck with North Florida’s Cari Whitmire and Anna Budinska early on, but the Ospreys got away and clinched the match with a 15-9 score.

Competition in the top spot remained tight throughout play. With the first set under their belts 21-18, the pair stayed on the tails of the Ospreys’ Dagnija Medina and Kim Hildreth and fell 21-18 in the second. Mannari and Lindelow pulled away early in set three, but North Florida retaliated and snatched the match 15-12.

“Today was tough,” Brock said. “We played hard and so well at times against a really good North Florida team. To get to the third game in three matches and lose them all shows that we still have work to do. Cati and Victoria were really dialed in, and they played one of their best matches of the season.”

Against Florida International, Pardo and Laura Whalen were the first to fall with a 21-15, 21-14 loss to the Panthers’ Maryta Gluchowicz and Kristine Monforte on court five. Eugene and Holman followed in the No. 4 spot as Ksenia Sukhareva and Camila Rosado pulled away in both sets to record a 21-11, 21-11 victory and bring Florida International within a point of clinching the match.

Court two clinched the match for the Panthers. Boyle and Hatcher held tight battles and made big comebacks throughout competition but could not hold on and fell 21-17, 21-11 to Maryna Samoday and Marina Boulanger.

With one win tallied for the day, the Boraski and Leak duo fought to make it two. Florida International’s Aren Cupp and Tina Toghiyani came out firing and snatched up the first set 21-5. With a consistently close second game, set two went to the Panthers 21-17.

“FIU was a big challenge,” Brock said. “We did not play our best volleyball against them. They were definitely a tough opponent, but we did not play well enough to get an honest gauge on how we truly matched up.”

LSU also competed in two sixth-seed exhibition matches that consisted of one set played to 25 points. Against North Florida, Khourtni Fears and Whalen fell 25-18 to the Ospreys’ Ebony Gunn and Emily Davanzo, and against Florida International, Hiller and Fears faced a 25-8 loss to the Panthers’ Savannah Davis and Giovanna Pasos.

The Tigers pick back up with competition Saturday as they take on Florida Gulf Coast at 7:30 a.m. CT and Florida Atlantic at 11:30 a.m. CT before Sunday’s pairs tournament.