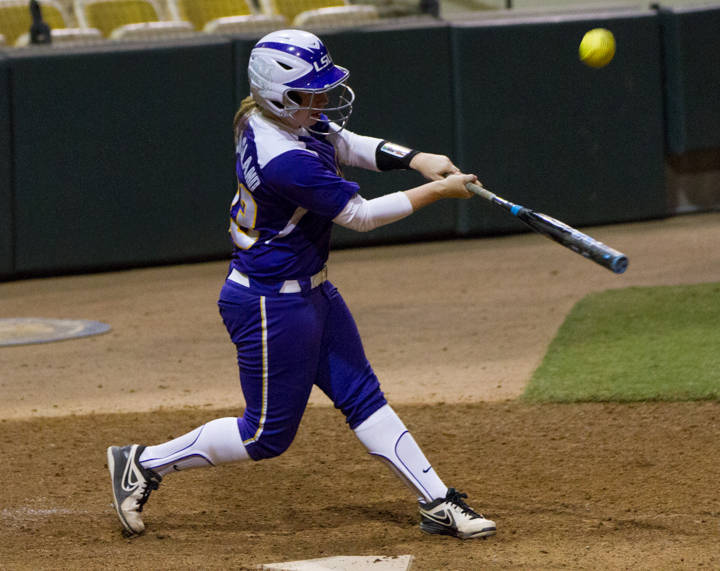 MONROE, La. – Coming off of a weekend where they scored just three runs in three games, the LSU softball team broke out of its slump and snapped its season-long losing streak by taking a two-run lead and exploding for 11 runs in the fourth inning capped by a Kailey McCasland grand slam as the Tigers overwhelmed the ULM Warhawks en route to a 14-1 win Tuesday night at the ULM Softball Complex.

The Tigers (20-15) snapped their five-game losing streak while also tying the team season high for runs scored with 14 and earning 11 hits for the first time since March 1 against Lamar in Tiger Park.

In front of the largest crowd in ULM history, the Tigers sent 17 batters to the plate in the fourth inning alone, as the squad did not get its first out of the frame until the 13th batter grounded out to first base. In one of their most efficient nights at the plate on the season, LSU left just seven runners on base while ULM left just five.

Seven different Tiger batters produced a hit on the night, with four having multiple hits. The shot of the night belonged to McCasland who hit her first home run of the season and first since the 2012 season  as she powered a pitch at her ankles and sent it over the fence for the team’s third grand slam of the season and setting a new career mark for RBI with four.

Sahvanna Jaquish went 1-for-3 with an RBI and run scored, while Bianka Bell brought in a run on her only hit of the night.

Baylee Corbello improved to 10-5 on the season after pitching a two-hitter in three innings of work against the Warhawks, striking out four on just 44 pitches, as Kelsee Selman came in and pitched the final two innings and gave up a run on no hits with three walks and four strikeouts, fanning the final three batters of the game in the bottom of the fifth inning.

ULM’s Haylie Wilson earned all five innings in the loss to fall to 1-2 on the year, even though she was relieved by Jessica Colliver who faced just three batters before coming back out in favor of Wilson who allowed three runs, two earned on three hits and did not record an out.

In the top of the second, Kellsi Kloss led off the inning with a walk to reach first. Simmons put down a bunt single, and then advanced to second on the throwing error with Kloss moving to third to put two in scoring position. A wild pitch scored Kloss to make it 1-0 Tigers, as Simmons moved to third base. Wray connected on a single through the left side to plate Simmons to make it 2-0, as Blades followed back with a bunt single to put two on. A fly out to left and fielder’s choice ended the inning.

After a scoreless frame, Simmons took to the fourth and opened the inning with a double that one hopped off of the fence in right field. Falcon singled through the infield and a resulting error in left allowed Simmons to score to make it 3-0, with Falcon moving to second. Wray doubled and drove in another with Falcon scoring to make it 4-0 Tigers.

Blades followed up with another single of her own, advancing Wray to third as the LSU left fielder moved to second on the throw in to put two back in scoring position. After a couple of defensive changes for the Warhawks, Andrews was plunked to load the bases full of Tigers. An error brought in one with an infield single by Jaquish plating another to make it 6-0.

A wild pitch kept the inning going to give LSU a 7-0 lead, as Bell ripped a shot through the middle to give the Tigers an 8-0 lead. Dylan Supak came on to pinch hit for the Tigers and got hit to load the bases still with no outs on the board. A walk to Simmons scored another run to give LSU a nine-run advantage, with McCasland providing the fireworks with her shoestring bomb to left center clearing the bases and scoring the final runs of the inning to make it 13-0 LSU.

After giving up a run, LSU got it back in the very next frame as Falcon cranked a solo shot over the fence in left field to make it 14-1 Tigers with two outs for the only run of the inning.

On LSU’s day at the plate against the Warhawks
“I thought a lot of people stepped up. We had some big at-bats and some big pinch hit at-bats that were really awesome. Kailey McCasland had a great night and what an unbelievable performance from her. Tammy Wray swung the bat well. Allison Falcon and the list goes on. A lot of people stepped up and did some really nice things”

On getting a lot of players into the game
“I think that will definitely help us in the long run. Getting everyone prepared for this weekend’s conference series I think is the goal of a lot of your midweek games. We were able to do just that and get some people some live at-bats, see live pitching and hopefully get them prepared.”

On the performance of the pitching staff
“We definitely need to have everybody ready for the series against Tennessee. I thought both of them looked good tonight. They were able to get the job done for us, and did exactly what we needed them to do.”