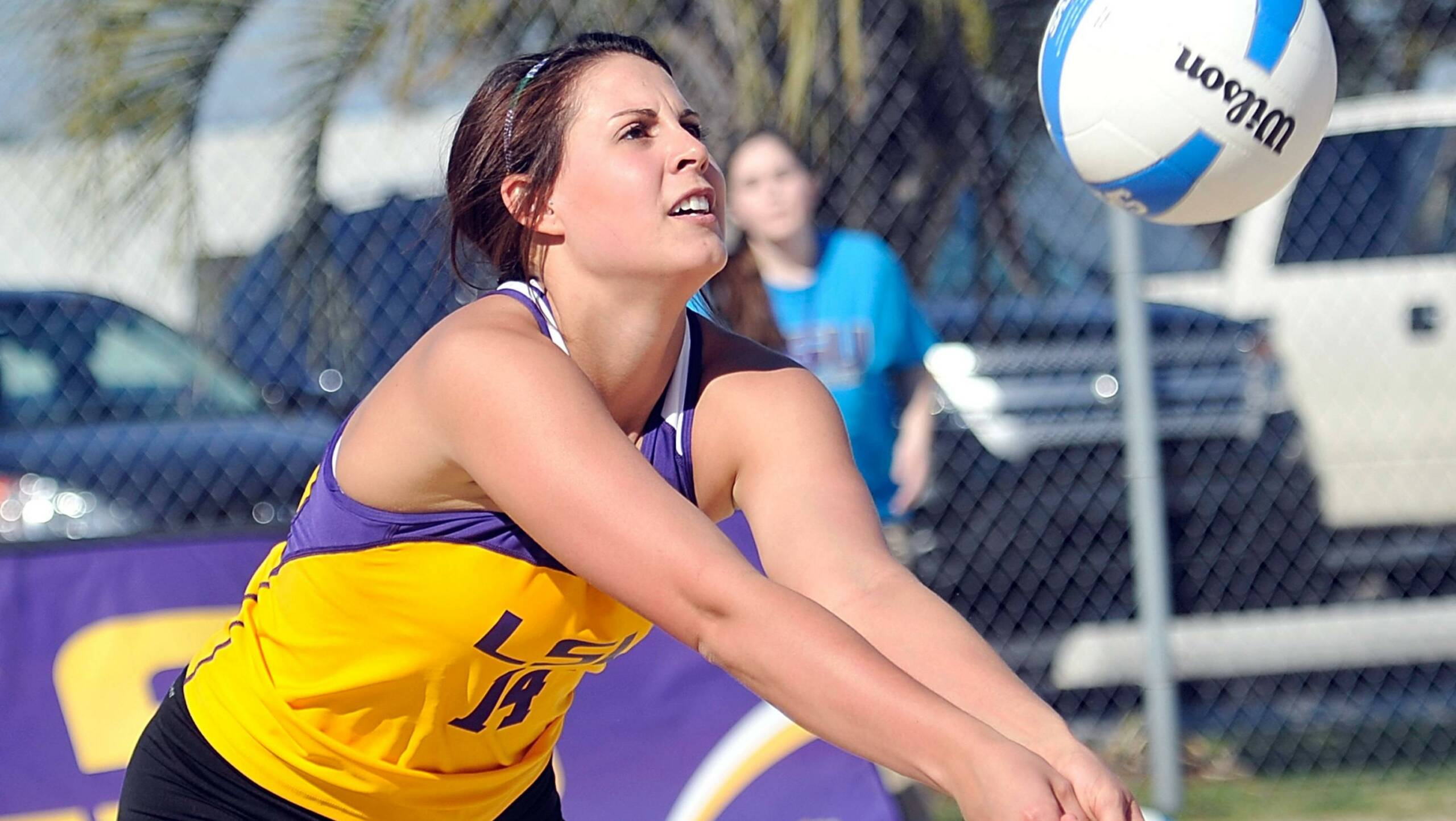 “We really wanted to come in today and get two wins,” associate head coach Russell Brock said. “We worked hard and overcame some tough situations to accomplish that goal. Today was a really good day, and I’m proud of how we played as a team.”

In a thrilling victory against the Dolphins, LSU advanced into the third sets on courts two, three and four. Jacksonville took the first point of the day in the top spot as Meghan Mannari and Katie Lindelow fell 21-11, 21-11 to Taylor Nyquist and Sammie Strausbaugh. Emma Hiller and Briana Holman quickly retaliated with a 21-15, 21-15 court-five victory over the Dolphins’ Jizzian Gesualdo and Shelby Barnett to tie up the score.

After a 21-19 first-set win, Helen Boyle and Kaitlin Hatcher fell 21-14 in the second set and recorded a 15-7 third-set loss to Jacksonville’s Kendall Courtney and Gabriela Roman to give the Dolphins their second and final point of the day.

Malorie Pardo and Laura Whalen tallied a 21-14 first-set loss but fought back to take the second match 23-21 and the third 15-11 against Jacksonville’s Lauren Homrich and Rachel Miller.

With the score tied, all eyes were on the court-three pair of Victoria Boraski and Cati Leak. The duo fell 21-18 in the first set and recovered with a 21-16 second-set win over the Dolphins’ Emily Laskelle and Mayara Prestes. After a neck and neck rally, Boraski and Leak came out on top 15-13 and tallied LSU’s third victory of the inaugural season.

Taking on No. 4 Florida State shortly after taking a victory, the Seminoles pulled away quickly against the Tigers and marked first-set victories on every court.

Pardo and Whalen were the first to fall, with a 21-13, 21-9 loss to the Seminoles’ Julia Thompson and Annie Montgomery on court four. Hiller and Holman followed with a 21-13, 21-11 loss against Florida State’s Fatma Yildirim and Sarah Wickstrom on court five.

The Seminoles’ third point to clinch the match resulted from court one as Mannari and Lindelow fell 21-9, 21-11 to Florida State’s Jace Pardon and Aurora Davis.

Mimi Eugene and Kaitlin Hatcher fell 21-6, 21-17 to Florida State’s pair of Stephanie Pellitteri and Kristina Pellitteri on court two, and Boraski and Leak recorded their first loss since the inaugural opener against UL-Monroe, falling 21-15, 21-11 to the Seminoles’ Julie Brown and Melanie Pavels.

After a break, LSU faced South Carolina for the teams’ second matchup this season.

The Gamecocks took the first point of the day as Hiller and Holman fell 21-10, 21-19 to South Carolina’s Erin Neuenfeldt and Koko Atoa-Williams. Boyle and Hatcher retaliated in the No. 2 spot to tie the match with a 21-10, 21-19 victory over the Gamecocks’ Mikaela Christiaansen and Sarah Blomgren.

LSU took the lead as Mannari and Lindelow recorded a 23-21, 21-16 win over South Carolina’s Paige Wheeler and Megan Kent in the No. 1 spot.

Court three clinched its second match of the day as Boraski and Leak tallied a 21-15, 21-17 triumph against the Gamecocks’ Jordan Loney and Jade Vitt.

Malorie Pardo and Mimi Eugene were the only pair to advance into the third set of competition, maintaining a tight third set. The duo fell in set three, and court four gave South Carolina its final point with an overall 17-21, 21-18, 15-13 loss.

“Beating Jacksonville, a third-year sand program, was a hurdle that we had not overcome, so that was fun,” Brock said. “Beating anyone two times in a row is always difficult, so winning the match against South Carolina was also impressive. Against Florida State, we wanted to fight hard, not back down and make them work. We started out slow but finished well, and I know that we learned a ton playing against a strong program.”

LSU will compete in a pairs tournament Sunday based on each duo’s performance during Saturday’s competition.