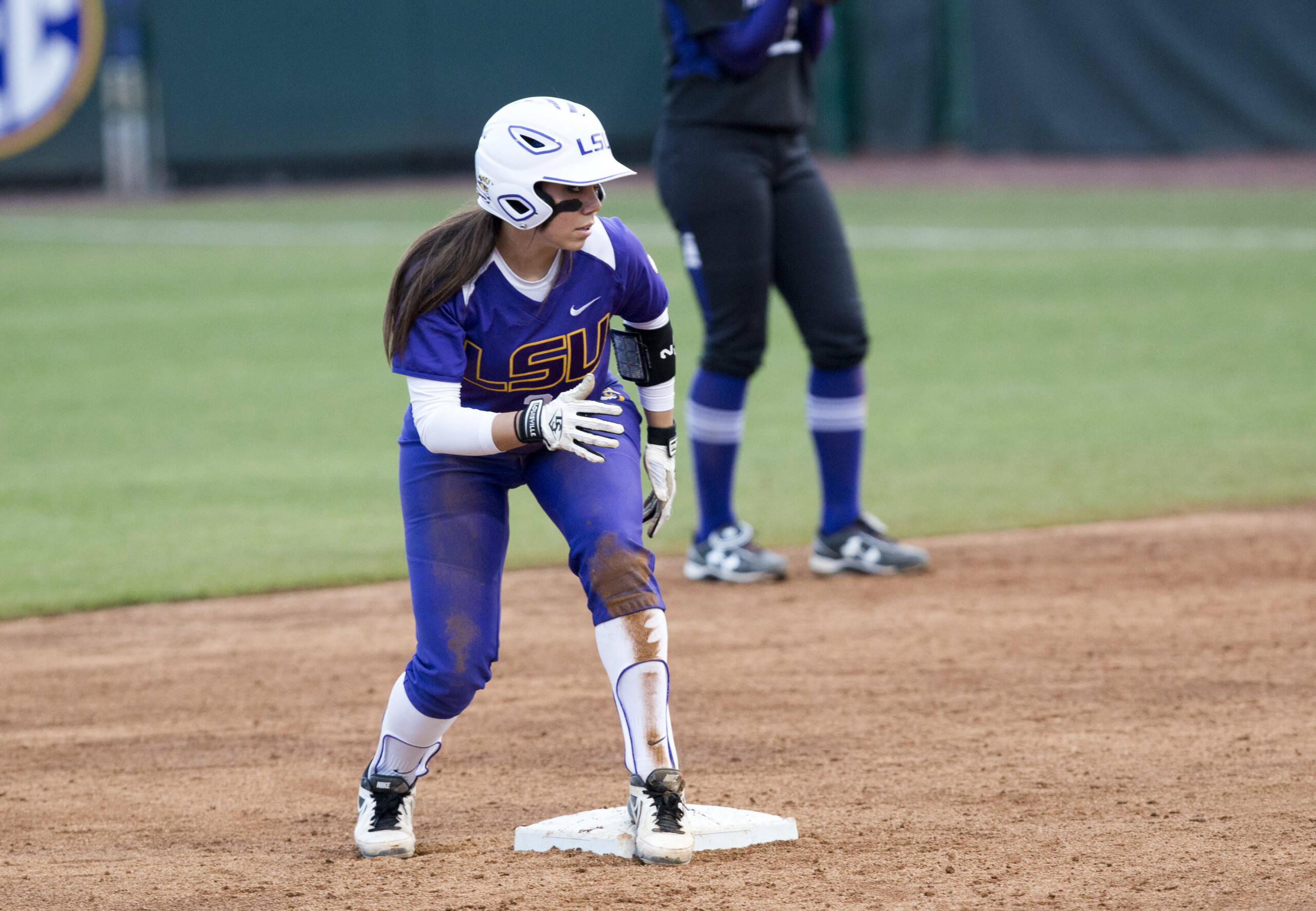 TUSCALOOSA, Ala. – Trying to hold on to a one-run lead, the LSU softball team seemed poised to send the series to a split on Sunday, but the Alabama Crimson Tide chipped away and finally broke through in the bottom of the seventh inning and got two runs, the final on a walk-off single, to defeat the Tigers 2-1 Saturday afternoon in front of a sellout crowd at Rhoads Stadium in Tuscaloosa.

Alabama (30-5, 10-1 SEC), who had only five hits and one runner advance past second base through six innings, sent six batters to the plate in the final frame to mount the comeback, as LSU (19-14, 2-6) had a critical error that kept the inning going as the final two runs of the game were unearned on the team’s second miscue of the day.

Four Tigers finished the game with multiple hits, as A.J. Andrews extended her record hitting streak to 15 games as she went 2-for-2 with a double, stolen base and run scored, followed by Sahvanna Jaquish went 2-for-3 with an RBI. Sandra Simmons and Kellsi Kloss each went 2-for-4, while Bianka Bell had a double and Tammy Wray had a single.

Taking the loss was starter Ashley Czechner who fell to 6-7 on the season in the circle, as she pitched 6.2 innings, giving up seven hits with two walks and a strikeout. Czechner retired 11 of the first 13 batters she faced, as she and the defense fought through a pair of jams in the fourth and fifth inning that put pressure on the team to keep the lead intact.

Alabama was led by Danae Hays who went 2-for-2 and was the only Crimson Tide batter to earn multiple hits, with Andrea Hawkins bringing in the first run on a sacrifice fly, while Kaila Hunt drove in the game-winning run on her only hit of the day for the second RBI for the home side.

Leslie Jury earned the start but Sydney Littlejohn earned the win after allowing just one hit with two walks and a strikeout to move to 6-0 on the season. Jury pitched five complete innings and allowed nine hits and gave up one run as the two shared time in the circle, as Littlejohn was the final pitcher in the game when Alabama made its comeback.

Andrews led off the game with a single to left and then took to second after stealing the base to get into scoring position. After a walk to Jacee Blades, Simmons hit into a fielder’s choice which forced out Andrews at third, as another by Bell forced out the Tiger first baseman at second to put runners at the corners with two outs. The inning ended with Bell caught trying to steal second.

The Tigers began to plug away without wasting time in the top of the second, as Jaquish singled to left center and was followed by Kloss who roped one into short center field to put two on with no outs. However, the next three went down in order after an infield popup, liner to left and strikeout looking to end the frame with two left on.

Andrews opened the third with her second leadoff hit of the game for LSU, doubling to left field. A walk to Blades put two on and Simmons used a bunt single to third to load the bases. After a strikeout, Jaquish dropped one to short right field to score Andrews from third to make it 1-0 Tigers. After another strikeout, an infield popup ended the inning with LSU on top 1-0.

With two outs in the bottom of the fourth, an error in the infield allowed a two-out base runner to reach first. An infield single put two on for the second consecutive inning for the Crimson Tide as Alabama had only three hits up until that point. Fortunately, a fielder’s choice to Allison Falcon at second forced out the runner to end the Alabama threat.

With an out in the top of the fifth, Bell doubled to right to get another Tiger into scoring position hoping to extend its one-run lead. After a strikeout, Kloss singled to center and Bell tried to come in to score but was thrown out at the plate to end the inning.

In the bottom half of the inning, after a grounder to Constance Quinn who came in at shortstop for the first out, a single and walk put two on for Alabama. An unassisted grounder to Simmons at first advanced the runners to second and third, a sky-high fly ball to Andrews in center ended the frame with LSU still leading 1-0.

Alabama fought through in the bottom of the seventh with a single by Jaclyn Traina to open the inning. On the next play, a ground ball to Falcon set up the fielder’s choice force out at second base, but Quinn initially had control and the umpired called Traina out, but the ball fell out and then was called safe to put two on after the error. A sacrifice bunt moved the runners over, as an intentional walk to Haylie McCleney loaded the bases. Hawkins hit a deep fly to right allowing Traina to score, as Hunt took the 1-2 pitch to right field to end the game.

First pitch for the series finale is set for 1 p.m. at Rhoades Stadium. The game will be televised live on Fox Sports South.