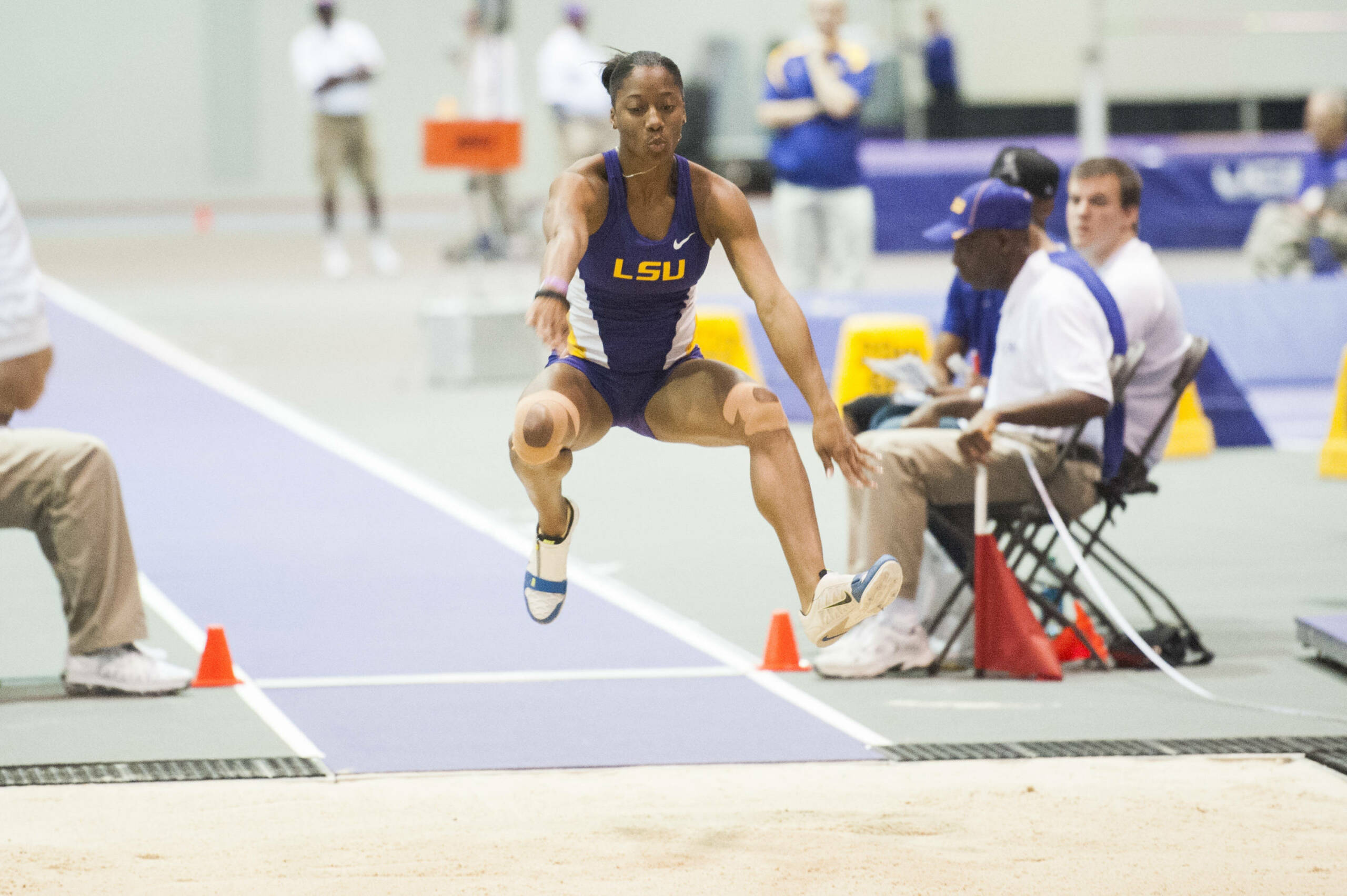 AUSTIN, Texas – Senior Keri Emanuel was crowned the women’s long jump champion as she became the first Lady Tiger in nine seasons to soar 21 feet in the event, while senior Nikita Tracey and junior Chance Chase emerged as two of the nation’s fastest 400-meter hurdlers in 2014 to highlight Friday’s action for LSU Track & Field at the 87th Clyde Littlefield Texas Relays.

Emanuel raised her personal best in the long jump by more than one foot with a winning jump of 21 feet, 6 ¼ inches in the second round to become the NCAA’s No. 1-ranked long jumper for 2014.

It was a long jump competition that also featured former Louisiana Tech All-American and 2012 U.S. Olympian Chelsea Hayes, who finished runner-up to Emanuel with a series-best of 20-11 ¼ on her first attempt.

Emanuel snapped a 21-year drought as she became only the second Lady Tiger in the history of the Texas Relays to win the women’s long jump championship as she joined former All-American Daphne Saunders, who won the Texas Relays title during the 1993 season. Emanuel is now the No. 5-ranked long jumper outdoors in school history after capping Friday’s action at Mike A. Myers Stadium.

She was not the only Lady Tiger to set an outdoor personal best in the long jump competition as freshman Nataliyah Friar opened with a wind-legal PR of 20-3 on her very first attempt to lock up fifth place in the event. Friar is coming off an indoor season in which she qualified for the NCAA Indoor final in the women’s long jump in her NCAA Championships debut in Albuquerque, N.M.

Emanuel added a sixth-place finish in the “A” section of the women’s triple jump earlier in the day as she jumped a series-best of 41-8 ¾ on her fifth attempt to highlight an outstanding season opener on Friday.

While Emanuel grabbed the No. 1 spot in the NCAA rankings in the women’s long jump, Tracey and Chase each raced to impressive seasonal bests in the final of the 400-meter hurdles in a race that produced the three fastest times in the NCAA for the 2014 outdoor season as Texas’ Danielle Dowie defended her Texas Relays title by the narrowest of margins.

Dowie held a five-meter lead ahead of Tracey coming over the eighth and ninth hurdles, but Tracey closed the gap over the 10th and final hurdle of the race before leaning at the line for a photo finish. Dowie defended her Texas Relays crown with a winning time of 57.52, while Tracey crossed the finish line just one one-hundredth of a second behind in second place at 57.53 in her first final of the season.

Chase also closed strong as she slashed more than one second off of her personal best with a time of 57.67 for third place with the third-fastest time nationally through two weeks of the outdoor season. Chase set her personal best by more than one second while entering the meet with a previous best of 58.72 set during her sophomore season a year ago.

Just one day after setting a personal best of her own at 59.69 in Thursday’s qualifying, Lady Tiger freshman Bryiana Richardson finished Friday’s final in fifth place with a time of 1 minute, 0.61 seconds.

“What a great way for us to end the day today with some big performances like we saw in the long jump and 400 hurdles,” said LSU head coach Dennis Shaver. “The Texas Relays this year is the season opener for quite a number of our athletes competing here this weekend, and many of them are taking advantage of their first opportunity to compete based on what we’ve seen in the two days we’ve been here.

“We also had a great day of qualifying on the track this morning, so those athletes will have another great opportunity to come back here and compete tomorrow and try to get just a little bit better for us early on.”

Friday saw the Tigers and Lady Tigers line up in their first relay finals of this year’s Texas Relays as they stepped onto the track in the evening session in the invitational 1,600-meter sprint medley relays.

The Lady Tigers entered the meet as the two-time defending champions in the event and winners of the women’s sprint medley relay title at the Texas Relays in four of the last five years. While running with a team of sophomore Kiersten Duncan (200 meters), freshman Bealoved Brown (200 meters), freshman Travia Jones (400 meters) and freshman Morgan Schuetz (800 meters), the Lady Tigers managed a sixth-place finish during the race while running 3 minutes, 52.96 seconds in the second heat.

LSU’s women surrendered their sprint medley relay crown to Texas A&M as the Aggies crossed the finish line a split-second ahead of Arkansas with a winning time of 3:49.56. The Razorbacks finished runners-up with a time of 3:50.02, followed by South Plains College in third place at 3:51.41, Kansas in fourth place at 3:51.51 and Virginia in fifth place at 3:52.26 ahead of the Lady Tigers.

The Tigers just missed cracking the school’s all-time Top 10 rankings list with their sprint medley relay performance as they raced to a second-place finish in the men’s university invitational with a time of 3:19.76. With a team of sophomore Darrell Bush, senior Shermund Allsop, junior Quincy Downing and freshman Blair Henderson, the Tigers finish runners-up to only Arkansas as the Razorbacks took the tape in 3:18.57.

The Lady Tigers were comfortable qualifiers into Saturday’s final in the women’s 4×100-meter relay after winning the second of five preliminary heats in Friday’s opening event on the track.

It marked the 2014 season debut for the Lady Tigers in the 4×100-meter relay as their team of senior Jasmin Stowers, Duncan, freshman Jada Martin and senior Takeia Pinckney teamed for a debut time of 44.17 to take the tape in the second heat ahead of Houston in the runner-up position with a qualifying time of 45.07.

Pinckney and Stowers each returned to the track to qualify for the final in the women’s 100-meter dash and 100-meter hurdles, respectively, while Martin just missed a spot in the 100-meter final despite setting a new wind-legal personal record by nearly two tenths of a second in her collegiate debut in the event.

Stowers powered herself through the finish line with a season-opening time of 13.01 (+0.6) to finish runner-up to the time of 12.94 by Kentucky’s Kendra Harrison in the fourth qualifying heat as the SEC rivals recorded the two fastest preliminary times of the day. Stowers will be joined in the final by Lady Tiger teammate Mariah Georgetown, who hurdled to a personal best of 13.39 (+1.1) for third place in the second heat as she took the ninth and final qualifying spot into the final of the women’s 100-meter hurdles that is scheduled to run Saturday at 2:25 p.m. CDT.

Pinckney did not compete for the Lady Tigers indoors this season after exhausting her eligibility a year ago, but has returned for her final outdoor season as she qualified for the 100-meter final at this year’s meet.

Pinckney, a former All-American in the 100 meters and reigning SEC Outdoor bronze medalist in the event, opened her senior season outdoors by running 11.42 (+0.7) to win the fourth qualifying heat with fifth-fastest time of Friday’s preliminary round. Martin raced to a wind-legal PR of 11.58 (+0.0) in her collegiate debut outdoors as she just missed a spot in the final as the 10th-place finisher in the qualifying round.

Lady Tiger freshman Rebekah Wales kicked off Thursday’s action in the first event of the day as she stepped onto the javelin runway in the “A” section in her first career appearance at the Texas Relays.

Just one week after setting a personal best of 166-11 in her collegiate debut to win the javelin title at Louisiana Tech’s Jim Mize Invitational, Wales threw a series-best of 165-1 on her second attempt in Friday’s qualifier to earn a spot in the final and claim a sixth-place finish in the final javelin standings. She actually eclipsed the 160-foot mark on four-straight throws in the middle of her series as she followed her top mark for the day at 165-1 in the second round with throws of 160-7 on her third, 160-2 on her fourth and 163-4 on her fifth throws of the day.

A native of West Monroe, La., Wales is off to a flying start to her collegiate career as she made the trip to the Texas Relays as the reigning SEC Women’s Co-Freshman of the Week following her collegiate debut.

In other field-event action, junior Tori Bliss opened her outdoor season by throwing a series-best of 53-6 ½ on her second throw of the competition to lock up fourth place in the “A” section of the women’s shot put. It was an event in which Bliss finished less than one foot behind Missouri’s Jill Rushin, who won the shot put title with her top mark of 54-5 ¼ in the final round.