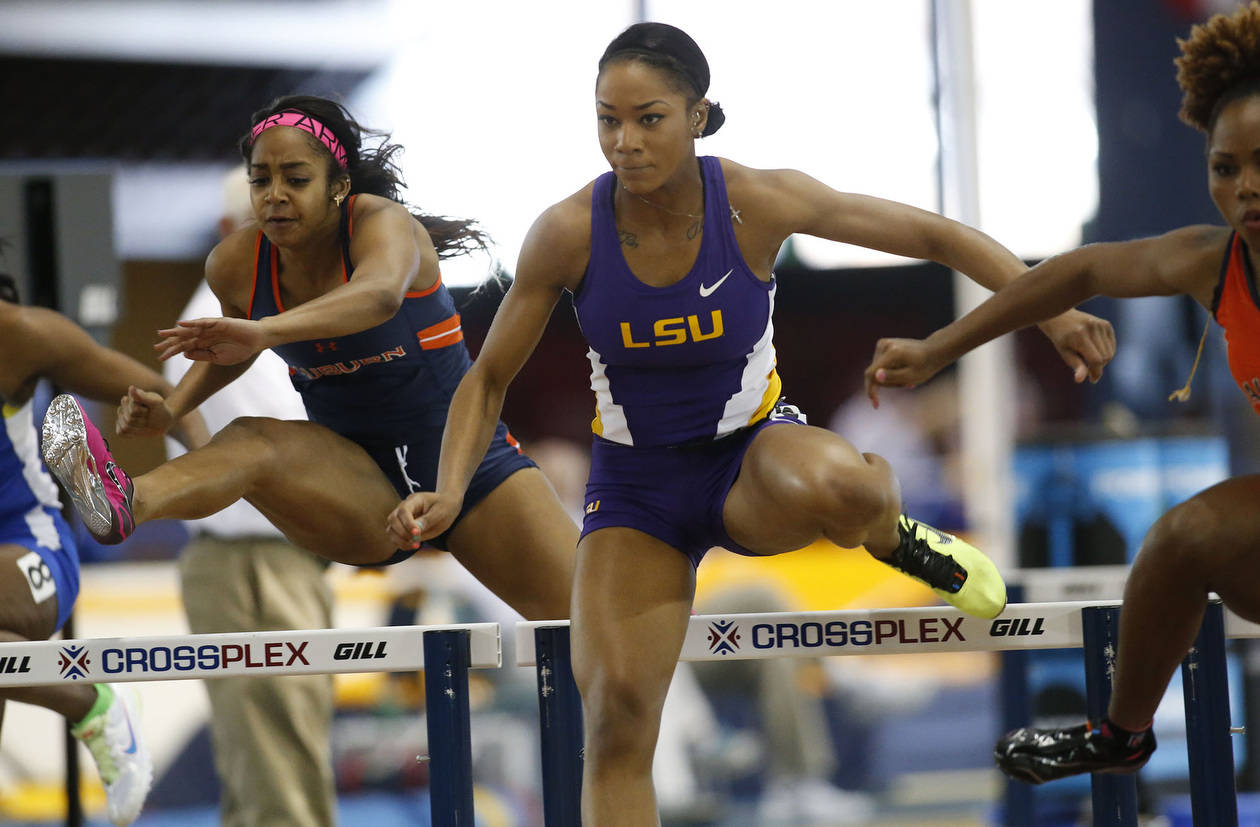 AUSTIN, Texas – Strong season openers by senior Nikita Tracey, sophomore Chanice Chase and freshman Bryiana Richardson in the qualifying round of the women’s 400-meter hurdles highlighted Thursday’s action for the LSU Track & Field teams at the 87th Clyde Littlefield Texas Relays being held this weekend at Mike A. Myers Stadium.

Tracey led all qualifiers with the fastest time of the day at 58.18 seconds to win the first preliminary heat of the day in her season-opening race on Thursday afternoon.

Tracey will line up in the final at the Texas Relays for the second-straight season after earning a third-place finish a year ago when she clocked 57.83 in the event final. Her opener on Thursday cut exactly one second off of her season opener from a year ago when she clocked 59.18 in her Lady Tiger debut in the 400 hurdles at the LSU Relays. Tracey later earned All-America honors in the event as the seventh-place finisher nationally at the NCAA Division I Outdoor Track & Field Championships in Eugene, Ore.

Chase is off to a much faster start outdoors in 2014 as her season-opening time of 59.38 on Thursday is more than three seconds faster than her 2013 debut of 1 minute, 2.53 seconds also in the qualifying rounds during the Texas Relays a year ago. She will line up in Friday’s final with a personal best of 58.72 in the event as she sets her sights on a strong finish this weekend.

Richardson’s collegiate debut is certainly one she will remember while crossing the finish line in 59.49 to eclipse her previous PR in the event. She joined the Lady Tigers after winning the young women’s silver medal in the 400 hurdles last summer at the 2013 USA Track & Field Junior Olympic National Championships in Greensboro, N.C., where she clocked her previous personal best of 59.49.

While the Lady Tiger hurdlers lit up the track with impressive season openers on Thursday, Tiger junior Jeremy Tuttle led the way in the field by setting his second-straight personal best in the men’s hammer throw.

After opening his outdoor season with a personal-best mark of 209 feet, 7 inches to win the men’s hammer throw at Louisiana Tech’s Jim Mize Invitational last weekend, Tuttle unleashed a PR for the second event in a row when he threw a series-best of 212-0 for third place during Thursday’s competition. That mark cracks the Top 10 of the NCAA rankings as Tuttle emerged as the No. 9-ranked hammer thrower nationally.

A native of Sierra Vista, Ariz., Tuttle has enjoyed great success at the Texas Relays during his career as he also threw his 2013 seasonal best of 201-0 in a fifth-place finish in the men’s hammer final a season ago.

Lady Tiger seniors Karen Henning and Denise Hinton each made their season debut in Thursday’s women’s hammer throw, and each posted a series-best of 191-8 as Henning took seventh place and Hinton finished up in eighth place in LSU’s first event of the day. Hinton threw 191-8 on her very first throw of the competition, while Henning matched her teammate with a season-opening mark of 191-8 on her third throw of the day.

Henning actually finished one spot her than Hinton in the final standings with a better second mark as her second-best throw of the day was 185-0 in the fourth round ahead of Hinton’s 167-8 in the third round. Kansas State’s Sara Savatovic won the women’s hammer title at this year’s Texas Relays with a mark of 213-10 to top the final event standings.

Lady Tiger sophomore Mayme Cook cracked the Top 10 of the school’s all-time rankings in the women’s javelin as she led a pair of LSU javelin throwers setting seasonal bests on the afternoon. Cook threw a best mark of 153-10 on her sixth and final attempt of the competition to move into third place overall in the standings. Fellow sophomore Terry Hughes threw a seasonal best of his own at 193-8 on his very first throw for the day, earning him a spot in the finals before finishing in ninth place in the “B” section of the men’s javelin.

A trio of Tigers and Lady Tigers ended Thursday’s events by running the 1,500 meters as junior Philip Primeaux, sophomore Andria Aguilar and freshman Morgan Schuetz each competed in the event.

Schuetz set a new personal best in the event as she ran 4:32.50 to finish runner-up to Sam Houston State’s Alyssa Dooley (4:28.81) in the women’s “B” section, while Aguilar followed across the finish line in fourth after running 4:37.32 in the race. Primeaux later stepped onto the track and clocked 3:54.43 for fifth place in the men’s “A” section of the 1,500-meter final.

The LSU Track & Field teams return to action early Friday morning at the 87th Clyde Littlefield Texas Relays as freshman Rebekah Wales kicks off the action in the field at 9:30 a.m. CT with the “A” section of the women’s javelin, while the Lady Tigers are the first to step onto the track for the qualifying round of the women’s 4×100-meter relay at 9:35 a.m. Live results from the meet can be found online at the official athletics website for the University of Texas at www.texassports.com.