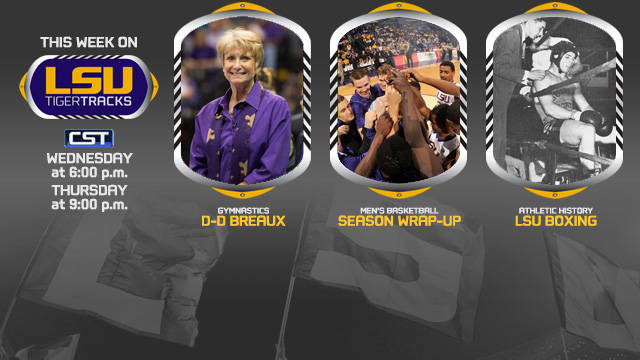 BATON ROUGE, La. – This week’s edition of LSU Tiger Tracks, a program highlighting various aspects of the university and its athletic department, can be seen at 6 p.m. Wednesday and 9 p.m. Thursday on Cox Sports Television.

LSU Tiger Tracks begins with a visit to the studio from gymnastics coach D-D Breaux, who previews the NCAA Regional scheduled to begin at 4 p.m. Saturday in the Maravich Center.

The show continues with a wrapup of the 2013-14 men’s and women’s basketball seasons, as head coaches Johnny Jones and Nikki Caldwell review the accomplishments of their teams.

The show also features a historical piece by correspondent Garrett Walvoord on the Fighting Tiger boxing program, which thrived at LSU from 1929-56.