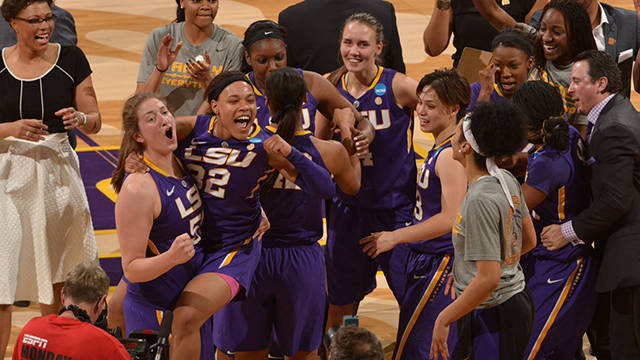 BATON ROUGE ? For the second consecutive season, the LSU women’s basketball team played with heart, fight, courage and determination to overcome a short bench and a highly-seeded opponent to advance to NCAA Sweet 16 on its home court, 76-67, over second-seeded and No. 7 West Virginia Tuesday at the Maravich Center.

The Lady Tigers (21-12) lost their third-leading scorer, Raigyne Moncrief, to a knee injury during Sunday’s opening-round win over No. 10 seeded Georgia Tech. Tonight, its second-leading scorer, Jeanne Kenney, was knocked out of the game with an injury after 12 minutes of play. Then, the team’s two top scorers in the post ? Theresa Plaisance and Shanece McKinney ? each had four fouls with 12 minutes left on the clock.

Despite facing a 63-56 hole at the 5:05 mark of the second half and its season hanging in the balance, LSU wasn’t going to be denied in front of its raucous crowd.

The Lady Tigers reeled off a 20-4 finishing kick and scored on their final 10 possessions to punch its second straight and 14th overall ticket to the Round of 16.

“This is one of those moments that as a fan and a coach, that you honestly can say this is one of the hardest fought games between two very good teams,” head coach Nikki Caldwell said. “A lot of credit to West Virginia for really pushing the envelope as far as pushing us to our limits and a lot of credit to these young ladies for answering that call.”

“I’m extremely proud of this team for realizing how great they can be,” Caldwell continued. “They’ve shown time and time again although our record did not reflect it that they could play and potentially beat some of the best teams in the country. This is a great victory for so many reasons ? not just for our seniors. Jasmine Rhodes is never going to forget this moment, and she will carry it with her for the rest of her career.? I’m extremely proud of our team for staying the course and not allowing adversity to just separate us.? If anything, it brought us closer together.”

Danielle Ballard spearheaded the Lady Tigers’ offensive attack and pumped in a solid all-around effort with 22 points, 15 rebounds, six assists and two steals. The sophomore guard made 8-of-9 free throws and logged a game-leading 38 minutes.

Off the bench, Jasmine Rhodes and Rina Hill who averaged a combined 5.7 points per game came up clutch for the Lady Tigers. Rhodes tacked on seven of her 11 points and gathered five of her six rebounds, while Hill notched eight points and two assists during the second half.

Despite the foul trouble, McKinney worked her way to 13 points on 6-of-8 shooting with five blocks. LSU has won all 11 games on the season when McKinney reaches double figures. Plaisance added eight points and nine rebounds. It marked the end of a 22-game streak with 10-plus points for Plaisance.?

LSU turned in a 27-for-70 performance from the field en route to a 38.6 percent and misfired on 11 of its 13 three-point attempts. However, the Lady Tigers drained 20-of-22 at the free throw line.?

The Mountaineers (30-5) were 19-of-63 shooting for a 30.2 percent ratio. After hitting four triples in the opening half, LSU’s perimeter defense forced West Virginia into a 1-for-10 clip in the second half. The Mountaineers compiled a 24-for-32 effort at the charity stripe.

West Virginia was led by Asya Bussie, who registered 13 of her team-leading 21 points at the foul line. Bria Holmes and Christal Caldwell finished with 12 and 10 points respectively.

With the victory, LSU advances to face No. 3 seeded Louisville Sunday at 1:30 p.m. CT in the KFC Yum! Center. The Lady Tigers were handed an 88-67 setback by the Cardinals on the road earlier this season.

For the second time in as many halves this postseason, the Lady Tigers came out of the locker room with a strong run to take initial control of the contest. Ballard opened the scoring with two free throws coupled with a pair of Harden layups and Kenney jumper to vault LSU to a 10-3 edge during the first 3:47 and force a West Virginia timeout.?

On the defensive end, LSU took the Mountaineers out of their comfort zones and forced West Virginia into a 3-for-20 mark from the field to begin the game.

LSU kept its 19-12 advantage on a McKinney with 9:38 remaining. She poured in nine points and tacked on four blocks in the first 10 minutes of the game.?

When Kenney left the game due to an injury two minutes later, West Virginia found its offensive rhythm and made eight of its next 11 shots to piece together a 17-6 spurt to take its own 29-25 edge capped by a Holmes layup.

However, with three WVU starters saddled on the bench in foul trouble, the Lady Tigers wrapped up the half with a 12 of the last 18 points over the final 4:56. Ballard and Rhodes accounted for 10 of the 12 points highlighted by a Ballard runner just before the buzzer to give LSU a 37-35 halftime lead.

The Lady Tigers kept the momentum with the initial seven points of the second half. Ballard drilled a couple of buckets sandwiched around a Harden trey to push the LSU advantage to 44-35 with 18:34 to go.

However in a span of four minutes, both Plaisance and McKinney picked up a pair of fouls each and went to the bench with four fouls. With LSU undersized in the paint, West Virginia ripped off 22 of the next 28 points on the strength of 13 free throws to snatch a 57-50 lead with 9:57 left.

The Mountaineers maintained their seven-point edge before LSU dug deep for a 20-4 flurry over the final 5:05. Defensively, the Lady Tigers limited West Virginia to only three baskets in the last 8:20.

“We were just saying stay together, don’t get discouraged ?play hard, keep trying to rebound and do all the little things,” Ballard said. “We tried to have energy, and we talked about energy. At first, we saw that we didn’t have energy on the court because our back was against the wall. In the huddle, we were saying some positive things. That’s what got us going.”

Ballard ignited the run with a layup followed by Hill and Rhodes jumpers. McKinney and Plaisance added second-chance putbacks between another Rhodes jumper which turned the tables in favor of the Lady Tigers at 68-65 with 1:45 remaining.

Inside the final 58 seconds, the Lady Tigers buried all eight of their free throw attempts to salt away the 76-67 decision.

“I want our kids to continue to enjoy tonight and enjoy tomorrow,” Caldwell said. “They have a day off, and we’ll get them ready. I want them to understand that what they just did, what they accomplished with the challenges that we had was amazing, and I want them to enjoy the moment.? Let the coaching staff get them ready for Louisville. We’ll be the ones watching the film and staying up late.? This group, they deserve a day, a full day, to just enjoy beating a very good West Virginia team, beating a very good Georgia Tech team to advance to another Sweet 16.”