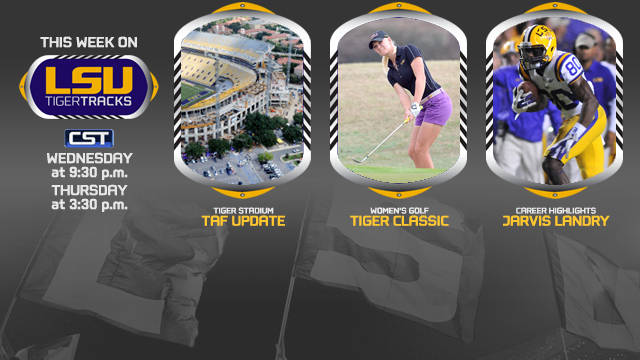 BATON ROUGE, La. – This week’s edition of LSU Tiger Tracks, a program highlighting various aspects of the university and its athletic department, can be seen at 9:30 p.m. Wednesday and 3:30 p.m. Thursday on Cox Sports Television.

LSU Tiger Tracks begins with visit to the studio from Rhett Butler of the Tiger Athletic Foundation, who provides an update on the Tiger Stadium South End Zone construction project.

The show continues with a profile of Lady Tiger golfers Lindsay Gahm and Ali Lucas, a pair of seniors who competed in their final home tournament last weekend at the University Club in Baton  Rouge.

The show also features a highlights package of spectacular plays by LSU wide receiver Jarvis Landry, who is preparing this spring for the NFL Draft.