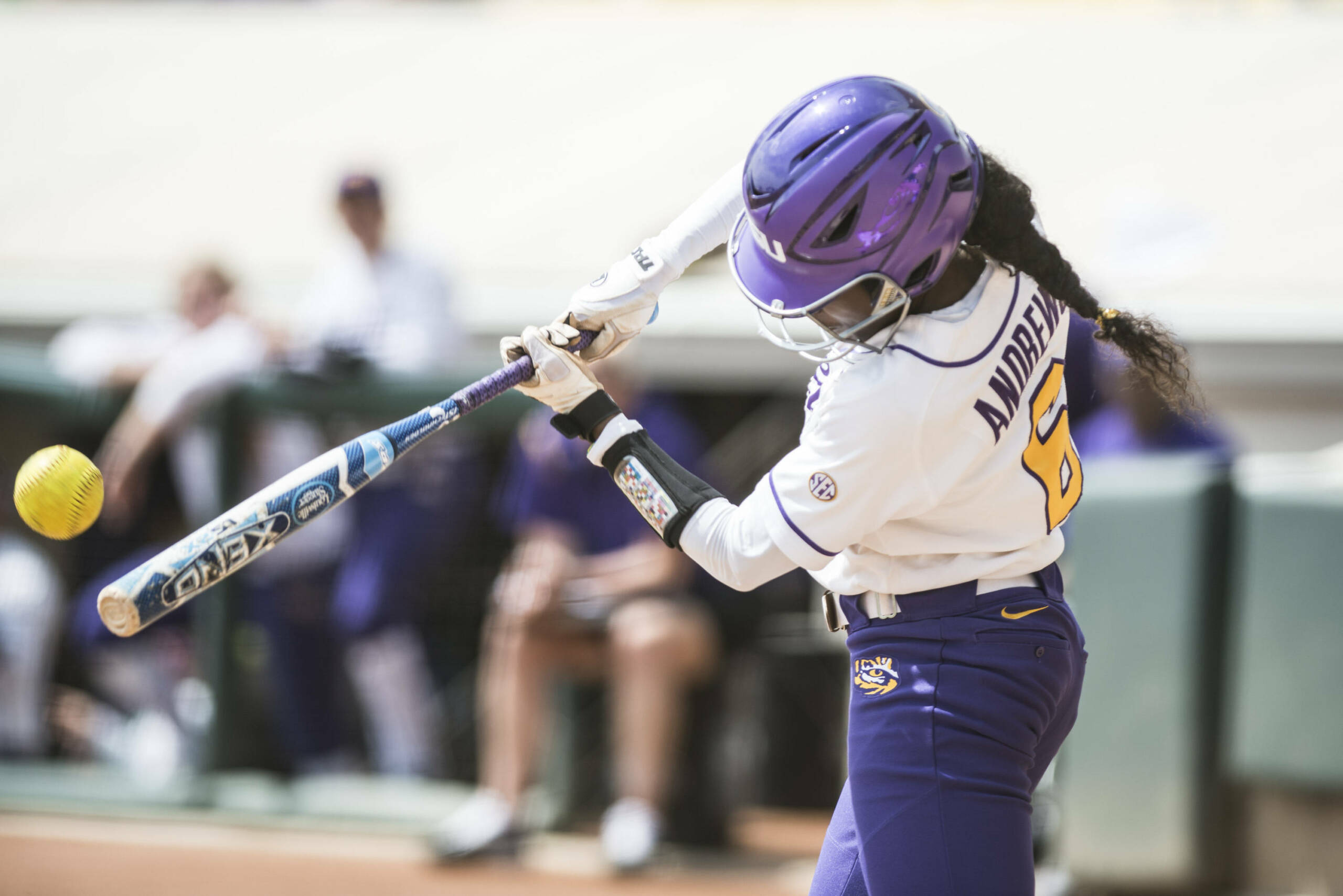 Nominee for LSWA Player of the Week

A.J. Andrews, Jr., Oldsmar, Fla.
Junior outfielder A.J. Andrews was helped pace the Tigers at the plate as she batted .444 with a double, triple and three RBI. The Oldsmar, Fla., native is currently on a season and career-long 13 game hitting streak, as she leads the team with a .402 batting average. Against Nicholls, Andrews drove in three including hitting her fourth double of the season, while against Oklahoma she earned her third triple of the season and combined to go 3-for-6 on the weekend.

Nominee for LSWA Pitcher of the Week

Baylee Corbello, Fr., Lake Charles, La.
LSU freshman pitcher Baylee Corbello allowed just two runs over two starts on the week as she struck out 17 and walked just five against Nicholls and Oklahoma. Against the Colonels, Corbello had a perfect game before allowing one hit in the fourth inning, but snapping a streak of 10-straight retired batters in the process on the way to her fifth shutout of the season with 12 strikeouts. In the series opener against Olkahoma, she had a no-hitter through five innings before giving up her only two runs of the week to finish with an ERA of 1.24 and opponent batting average of .125.

Nominee for SEC Freshman Player of the Week

Constance Quinn, INF, Hattiesburg, Miss.
LSU freshman Constance Quinn had four RBI, slugged 1.250 and had a batting average of .500 on the week as she played in two games making one start for LSU over the week. Against Nicholls, Quinn made her only at-bat of the game count as she had a two-RBI single against Nicholls last Wednesday, as she followed that up on Sunday against No. 22 Oklahoma with her first career home run in the fourth and drove in another in the fifth against the Sooners. Quinn has earned a hit in four of her last five games she’s appeared in.

Notes on the Tigers
LSU enters the week 19-12 on the season after going 1-2 last week against non-conference opponents. The Tigers return to SEC play with a three-game series against Alabama in Tuscaloosa. The finale of the series will be televised on Fox Sports South and online on ESPN3. The team is 2-3 in its last five and 4-6 over the last ten games. The Tigers defeated Nicholls in five, 9-0, while dropping a pair to Oklahoma 2-1 and 3-2. LSU hit .312 as a team last week, producing 24 hits to 11 for the opposition, and earning 12 RBI to just three for the opposite side. The Tigers are 17-8 in non-conference games this year. LSU is 3-4 in road games, sitting at 2-2 against non-con opponents and 1-2 against league opponents. The Tigers scored nine runs against Nicholls and is 6-1 when scoring more than six runs per game, but combined for just three against the Sooners and is 2-9 when scoring two or less runs in a game this season. The Tigers have outscored their opponents 165-84 this season, but has been outscored 10-7 in the seventh inning. LSU has tied or outhit four of its last five and 10 of the last 11. The Tigers stranded 23 total runners over the course of the week, with 18 coming against the Sooners. LSU has hit 31 home runs on the season, with 24 coming in non-conference play. The last three of the team’s home runs have come in the fourth inning, making for 10 total in that inning on the season. LSU has hit 13 home runs with no outs, with eight coming in the leadoff spot. A.J. Andrews, Allison Falcon and Bianka Bell each hit .444 on the week with four hits each. A.J. Andrews is currently on a team-leading and career-long 13-game hitting streak. Andrews slugged .778 for the week and had a double, triple and three RBI as she leads the team with a .402 batting average. During her hitting streak, Andrews has five multi-hit outings with three games of two hits and two games with three hits. Bell is currently on a career-long eight-game hitting streak. Falcon had four hits and struck out just once in nine at-bats. Sahvanna Jaquish hit her team-leading ninth home run of the season in the first game against Oklahoma. It was the fifth time this season that Jaquish has hit a home run as the leadoff batter in an inning, as she has hit five of the last 10 and eight of the last 15 for the team. Jaquish has 28 RBI which is first on the team and 56 total bases which is second. Sandra Simmons was 2-for-4 on the week with an RBI and two runs scored, as she was walked six times, the most for any player on the team during the three games. Constance Quinn drove in a team-high four RBI in two games, earning one start. Quinn hit her first career home run against the Sooners in game two, as she drove in two runs against Nicholls. Quinn finished the week slugging 1.250, with a .500 average and .600 on base percentage. LSU had a team earned run average of just 1.24 over the week, allowing just four earned runs on 11 hits in three complete game outings. Corbello pitched in two of the three games and finished with a 1.24 ERA, allowing two runs on five hits with 17 strikeouts and five walks. Corbello nearly pitched a perfect game against Nicholls as she earned her fifth shutout of the season with 12 strikeouts, and had a no-hitter through the first five innings against Oklahoma. Corbello has earned double-digit strikeouts in two of her last five games, and has five games with 10 or more in an outing. Ashley Czechner pitched in the finale against Oklahoma and gave up just three runs, two earned, on six hits with four strikeouts. Czechner has given up two earned runs or less in nine games this season.