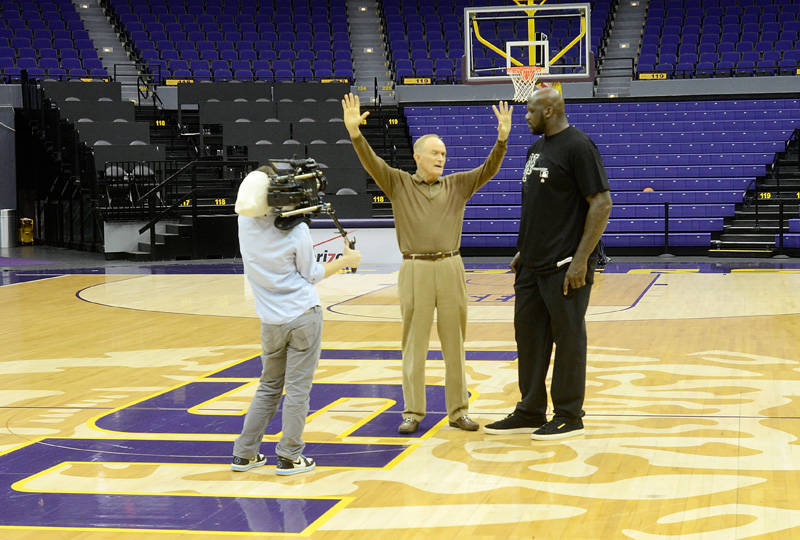 BATON ROUGE – National Player of the Year and All-American Shaquille O’Neal and his coach, Dale Brown, who led LSU to two Final Four and four Southeastern Conference titles in 25 years are part of the 2014 induction class announced Tuesday for the National Collegiate Basketball Hall of Fame.

The pair is part of a star-studded Class of 2014 that will be inducted into the National Collegiate Basketball Hall of Fame on Sunday, Nov. 23, at the Arvest Bank Theatre at the Midland in Kansas City as part of a three-day celebration of college basketball.

Joining the LSU pair in the class are All-Americans and NCAA champions Grant Hill of Duke and Darrell Griffith of Louisville; NAIA star Zelmo Beaty from Prairie View; another NCAA Final Four Coach in Gary Williams of Maryland; and, contributors Howard Garfinkel, the founder of the Five-Star Basketball Camp, and Glenn Wilkes, Sr., long-time coach at Stetson and prolific author of basketball coaching books.

The Hall of Fame is located in the College Basketball Experience (CBE), a world-class entertainment facility adjacent to Sprint Center in Kansas City. The CBE Hall of Fame Classic will take place November 24-25 at Sprint Center. The four teams participating are Alabama, Arizona State, Iowa State and Maryland.

O’Neal played three years for Brown at LSU (1989-92) and averaged 22 points, 14 rebounds and five blocks. He was a national player of the year as a sophomore and a first-team All-American and SEC player of the year as both a sophomore and a junior. He finished his career fifth in scoring with 1,941 points and second in rebounds at LSU with 1,217. He had a career record of 64-29 in three years at LSU and set LSU records for blocks in a game, season and career.

“The Class of 2014 has a unique identity with a player-coach tandem, along with three outstanding players and a coach who led their teams to national championships,” said Reggie Minton, deputy executive director of the National Association of Basketball Coaches and chair of the Hall of Fame selection panel. “With the addition of two men devoted to developing basketball skills at summer camps for close to a half-century, we look forward to celebrating them at the induction in Kansas City in November.”

In 2006 the first class was inducted into the newly formed National Collegiate Basketball Hall of Fame. That class included the game’s inventor, James Naismith, and possibly its greatest coach in John Wooden, along with Oscar Robertson, Bill Russell and Dean Smith. Since that time, seven more classes have been inducted and have included the likes of Kareem Abdul-Jabbar, Danny Manning, Larry Bird and Earvin “Magic” Johnson.

O’Neal and Brown become the fifth and sixth members of the National Collegiate Basketball Hall of Fame that have LSU ties to be inducted joining Bob Pettit (2006), Pete Maravich (2006), Tex Winter (2010) and Joe Dean, Sr. (2012).