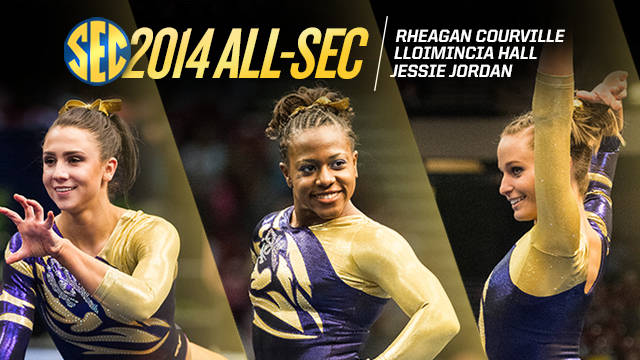 The All-SEC team is comprised of the student-athletes with the top two scores, including ties, on each event and in the all-around competition in the first session and second session of the SEC Championship.

Hall earned All-SEC recognition by winning a share of the SEC floor exercise title for the third straight season with a 9.95 in Session II of the SEC Championship. Jordan recorded the second-best vault score of the meet with a career-high tying 9.95, and Courville finished in second place on beam with a 9.90 to achieve All-SEC honors.

It is the third consecutive season in which Courville and Hall have received All-SEC honors, and it is the second time Jordan has earned the distinction.

No. 3 LSU (15-5) will be back in action at 4 p.m. CT on April 5 when the Tigers host the NCAA Baton Rouge Regional in the Maravich Center. The meet serves as the first round of NCAA competition and features No. 10 Stanford, No. 13 Auburn, Arizona, Kent State and Iowa State.

Tickets are available for purchase by visiting http://www.lsutix.net/.