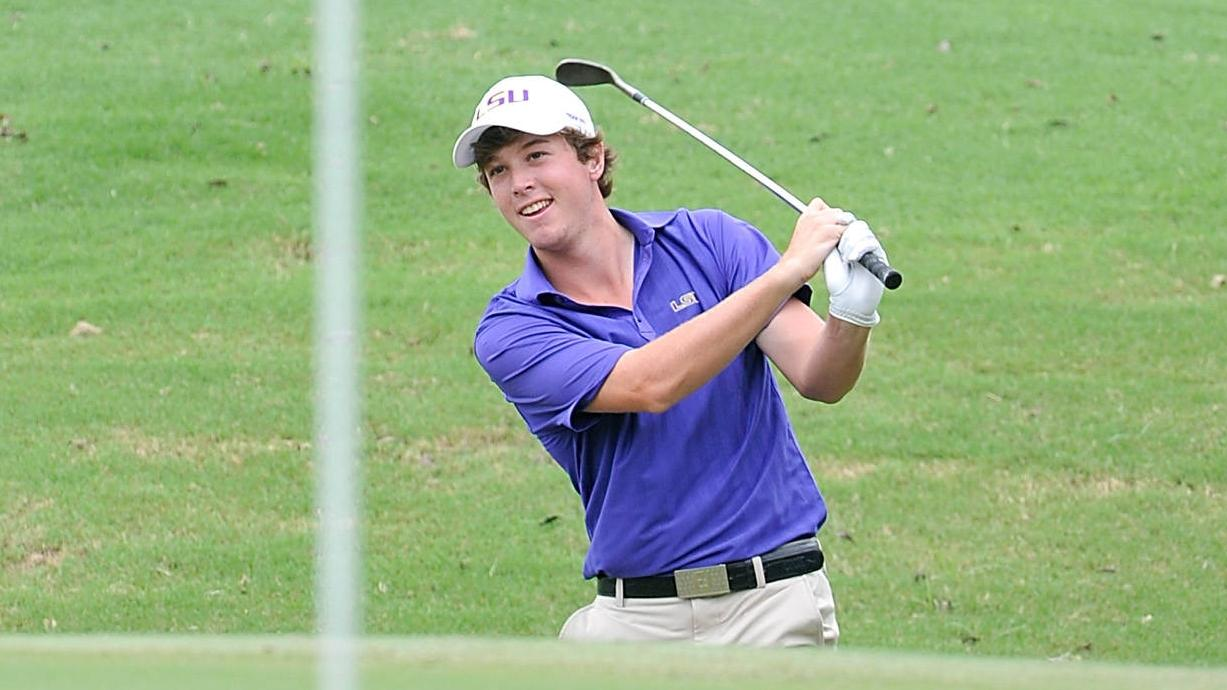 PALM CITY, Fla. – The No. 27-ranked LSU Tigers came out firing on the first day of competition at the Valspar Invitational at Floridian after firing back-to-back team rounds of 6-under par 278 to finish Monday’s action in third place just two shots off the pace of co-leaders Oklahoma State and Georgia Tech in the event being held at Floridian Golf Club.

After finishing the morning round in seventh place in the 15-team field, the Tigers catapulted themselves into third place overall at the end of the day with their 36-hole team score of 12-under par 556.

In what is sure to be a tight race for the title throughout Tuesday’s final round, the Tigers will tee off just two shots behind No. 3-ranked Oklahoma State and No. 4-ranked Georgia Tech as each leads the way with their matching scores of 14-under par 554 during Monday’s action. Five teams ended the day within four shots of one another in the top five of the team standings.

No. 28-ranked SMU follows closely behind in fourth place at 11-under par 557, while No. 9-ranked Illinois rounds out the top five of the team standings in fifth place with a score of 10-under par 558 on the afternoon.

As he has done throughout the 2013-14 season, junior All-America hopeful Stewart Jolly led the Tigers near the top of the leaderboard after firing rounds of 5-under 66 and 4-under 67 for a 36-hole score of 9-under par 133 as he also finished the day just two shots off the pace in the race for the individual championship.

Jolly, who teed off Monday as the No. 20-ranked collegiate player in the country in the latest Golfstat rankings, was nearly flawless on the day as he carded one eagle and nine birdies along with just two bogeys for the 36 holes played on the opening day of the competition at Floridian Golf Club.

With his performance, Jolly ended the day just two shots off the pace set by Florida State’s Jack Maguire, who topped the charts with a two-round total of 11-under par 131 with rounds of 6-under 65 and 5-under 66.

Georgia Tech’s Ollie Schniederjans followed Jolly in third place at 8-under 134, while South Florida’s Chase Koepka, Texas A&M’s Andrew Lister and Florida’s JD Tomlinson trailed in a tie for fourth place at 7-under 135.

While Jolly is already poised to earn his team-leading third top-five and fifth top-10 finish in his eighth tournament start of the season, he is also in contention for his second tournament championship for the season as he was crowned the co-champion of the Golfweek Conference Challenge in the event held at Spirit Hollow Golf Course in Burlington, Iowa, during the fall season. He is poised for a third-straight top-10 finish this spring after tying for sixth place at the Querencia Cabo Collegiate and finishing in eighth place at the Louisiana Classics.

Senior Smylie Kaufman and junior All-American Curtis Thompson each broke par in the first round to lead the Tigers to a team round of 6-under 278 as Thompson fired a 2-under par 69 and Kaufman recorded a 1-under par 70 to kick off the tournament. Kaufman then added an even-par 71 toward LSU’s 6-under 278 in the afternoon, while Thompson ended the day with a 1-over par 72 in the second round.

Both Kaufman and Thompson capped the opening day of the competition in a tie for 22nd place on the leaderboard with matching 36-hole scores of 1-under par 141.

After opening the championship with a 2-over 73 in the first round, junior Ben Taylor leveled his tournament score with an impressive 2-under 69 in the second round that included four birdies for his two-round tally of even-par 142. That performance tied him for 32nd place during Monday’s action as he ended the day just four shots outside of the Top 10 of the leaderboard.

Sophomore Zach Wright bounced back from a 7-over par 78 in the morning round by adding an even-par 71 toward LSU’s team total in the afternoon round to end the day in a tie for 66th place on the leaderboard while posting a 36-hole score of 7-over par 149. He looks to continue his momentum from the second round into the final round of this year’s championship.

The Tigers are paired with co-leaders Oklahoma State and Georgia Tech in Tuesday’s final round as they will tee off from the front nine beginning at 8:33 a.m. CT. Fans can follow along as the Tigers compete for the first tournament championship of the 2013-14 season as Golfstat will provide live scoring of the final round at www.golfstat.com.