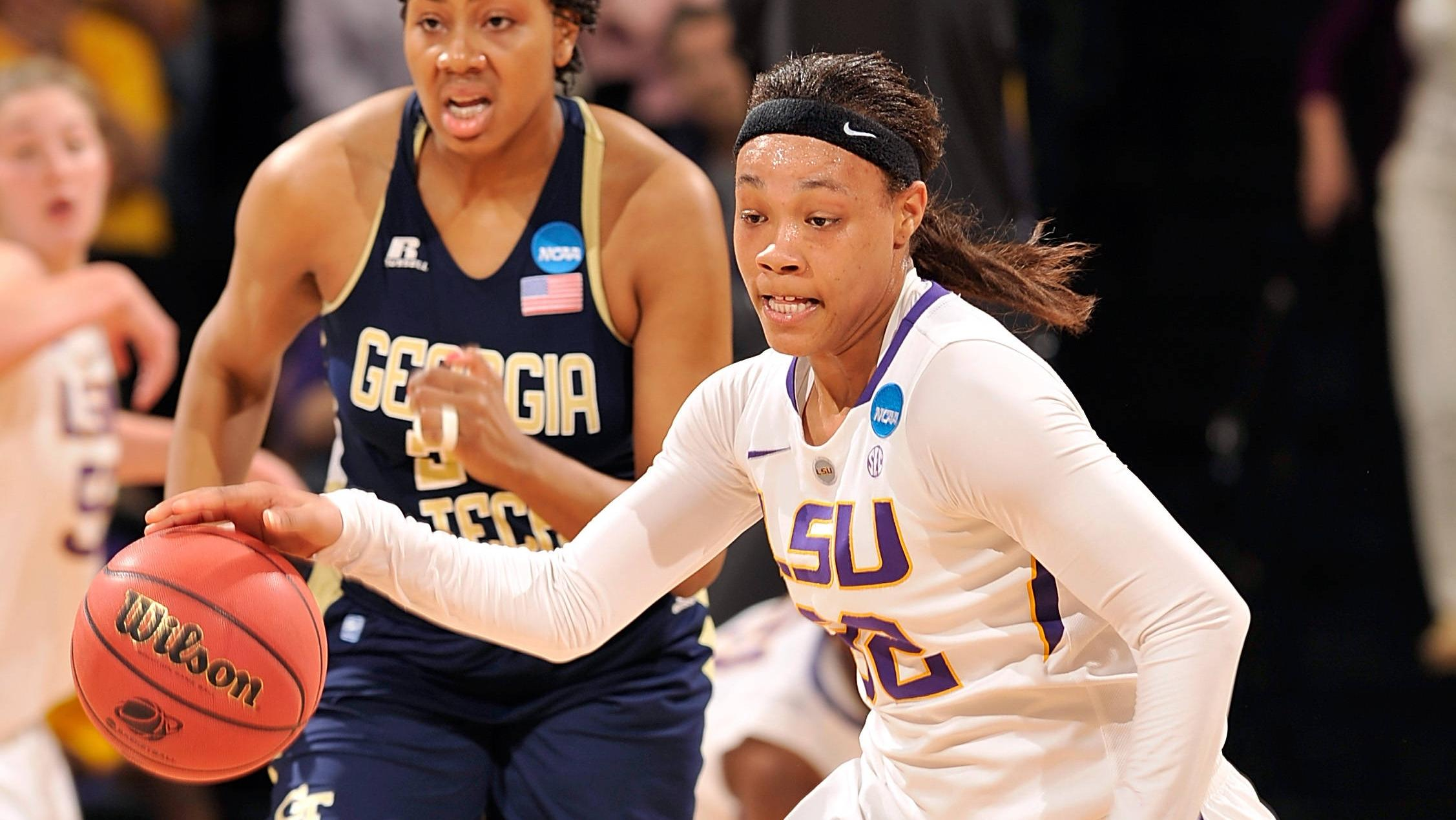 BATON ROUGE – The LSU women’s basketball team wanted no part of Georgia Tech’s half-court pressure defense during Sunday’s NCAA Tournament First Round game at the Maravich Center. Instead, the Lady Tigers used a high-octane, full throttle offense attack to set the school’s postseason scoring record and run away from the Yellow Jackets, 98-78.

The Yellow Jackets (20-12) were put into an early double digit as LSU ripped off the game’s first 10 points and couldn’t keep up with the homestanding Lady Tigers.

“Today this team showed a lot of toughness, and they showed that they can play this game for 40 minutes,” head coach Nikki Caldwell said. “A lot of credit to Georgia Tech – with their defensive pressure and their defensive scheme, I felt our team handled that pressure very well. Again, this group has shown that they cannot only score the basketball when they need to, but they also can defend it when they need to. We did a nice job of getting on the boards.  We did a nice job of sharing the basketball and just playing together as a team.”

Danielle Ballard sparked a balanced offensive effort with 24 points and a career-high 17 rebounds en route to her fifth career double-double. The 24 points marked Ballard’s fourth 20-plus performance of the season, and was one point shy of matching a career-best.

Theresa Plaisance provided 21 points and 11 rebounds to claim her fourth double dip in her last seven outings. The All-SEC First-Team performer notched her seventh 20-plus point effort on the season and garnered her 22nd consecutive game in double figures.

Off the bench, DaShawn Harden pumped in 17 points on 5-of-8 shooting and buried all three of her three-point attempts. Shanece McKinney was a force on the interior with a balanced 14 points, six rebounds and a career-high six blocks. The senior forward was a perfect 5-of-5 from the floor.

Jeanne Kenney tallied 11 points, seven rebounds and six assists. After returning to the starting lineup, Raigyne Moncrief chipped in six points before leaving the game with an injury during the second half.

“I thought Danielle Ballard set the tone for us, but she’s been setting it in practice,” Caldwell said. “Jeanne Kenney, being able to play her off the ball, allowed us to do a lot of different things in that regard.  I like the play of Shanece McKinney night how.  She’s really being aggressive, not only offensively, but defensively she’s become that stopper for us. Players are becoming who they have always been. They’re just realizing it now, and better late than never. I’m proud of this group for playing this game with high intensity for 40 minutes.”

LSU knocked down a season’s best 35 field goals and shot 50 percent for the game. The Lady Tigers were 4-of-10 from beyond the three-point arc and sank 24-of-30 at the free throw line. LSU also set a program postseason single-game mark with 57 rebounds and held a 57-30 advantage on the glass.

Georgia Tech was led by Tyaunna Marshall and Sydney Wallace who scored 20 points apiece. The duo had to work for their points on a combined 18-of-41 from the field. The rest of the Yellow Jackets managed only a 12-for-35 shooting clip.

The Lady Tigers used a fast tempo to avoid the Georgia Tech half-court pressure and were rewarded with the first 10 points of the game on 5-of-8 shooting over the opening 2:29 of the contest. Kenney drained a triple, Moncrief and Ballard followed with midrange jumper and Ballard completed the flurry with a traditional three-point play on a reverse layup.

While LSU cooled off from the field, the Yellow Jackets made eight of their next 10 shots to cut what eventually grew to a 21-9 hole down to two, 25-23, with 9:25 left in the first half.

A pair of free throws by Harden and a fast-break layup by Ballard pushed LSU’s advantage back to six, 31-25. Harden, who had 10 points on 3-of-4 shooting in the first 12 minutes, was whistled for her second foul and went to the bench until the 3:51 mark of the half.

A three pointer by Georgia Tech’s Wallace and a three-point play courtesy of Davis had the Yellow Jackets within two, 35-33, for the first time since the opening minute.

With Harden on the bench, Ballard scored 10-straight points to keep the Lady Tigers ahead, 39-33, with 5:07 left in the half.

A three-point play by McKinney and a short jumper by Ballard in the final minute gave the Lady Tigers a 51-44 lead at halftime. The Lady Tigers’ 51 points were the most in a half since Nov. 15, 2009, when they led Centenary, 51-9.

Once again, LSU came out of the locker room firing on all cylinders, making 7-of-9 field goals and increasing its advantage to 64-50 with 16:18 to play.

Less than a minute later, LSU lost Moncrief to a leg injury which sparked an 8-2 Georgia Tech run that included a pair of baskets by Marshall and Wallace.

LSU answered with 17 of the next 22 points to push the advantage to 83-63 at the 7:38 mark. Plaisance had eight points during the spurt which included a highlight reel layup off a beautiful feed from Kenney. The senior guard whipped a one-handed, 35-foot pass to Plaisance for an easy tip-in at the rim.

Down the stretch, the Yellow Jackets would get no closer than 14 points. LSU closed out the game with a 6-of-8 mark at the charity stripe over the final 3:26 to secure the 98-78 decision.

“On film, we saw that we could push down,” Ballard said. “After seeing in the game we kept going, kept doing it and they kept getting exhausted. We just kept trying to doing what was best for us. Georgia Tech has some awesome guards. They can defend.  It was very hard going against them.  We had to be really focused on what we wanted to do, either take or pass out, but it was very difficult going against these girls. There are some good players on their team.”