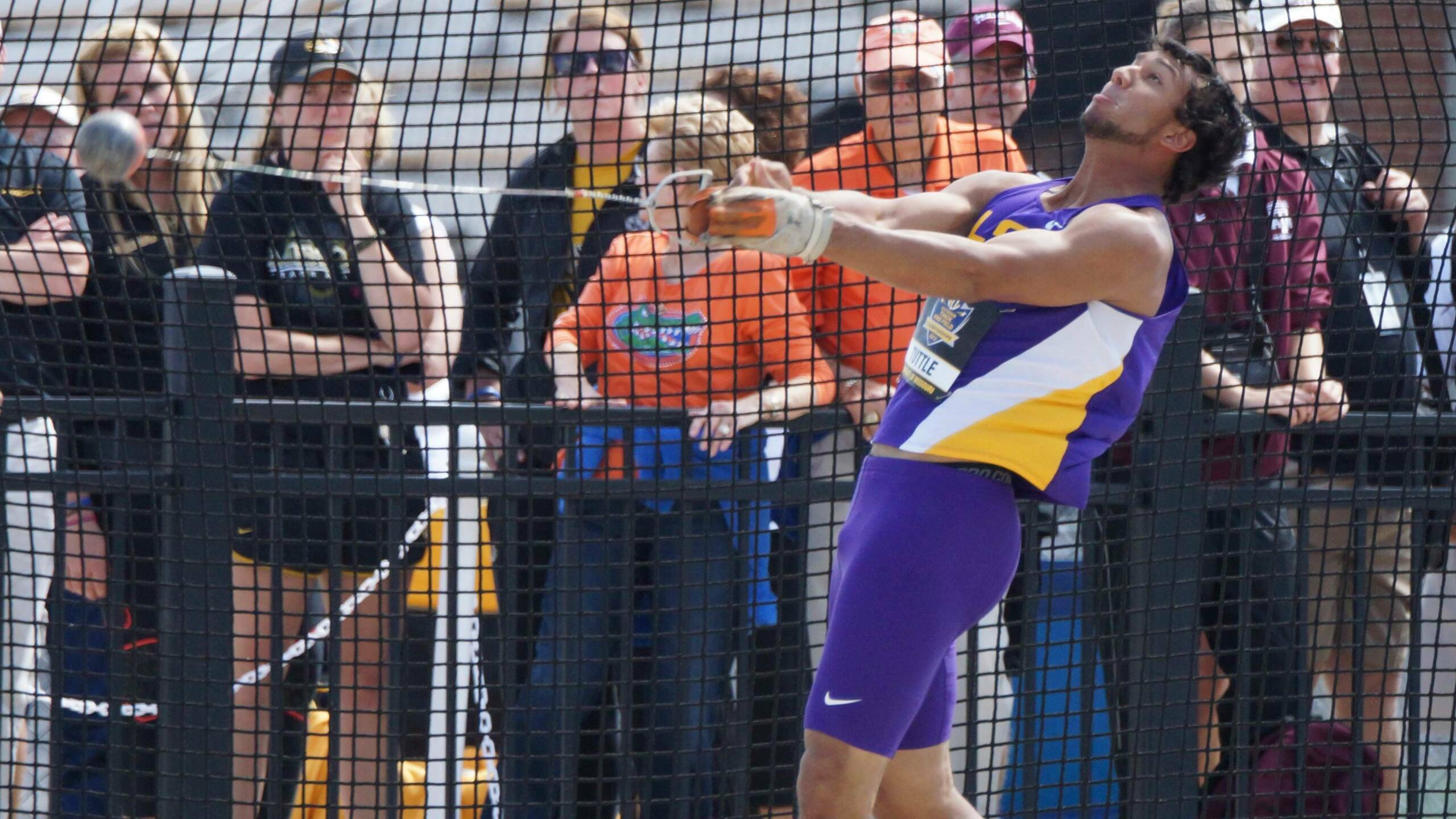 Tuttle and Wales each eclipsed their previous personal bests by nearly nine feet to win their outdoor openers on Saturday, while junior Philip Primeaux and sophomore Andria Aguilar swept men’s and women’s 3,000-meter titles and freshman Blair Henderson ran away with the men’s 800 meters as the teams combined for five event wins on the afternoon.

Tuttle certainly got the ball rolling in the first event of the day in the men’s hammer when he unleashed a personal-best throw of 209 feet, 7 inches to finish more than 17 feet ahead of his nearest competitor.

Tuttle, who eclipsed the 200-foot mark only once during his sophomore season a year ago when he set his previous PR of 201-0 at the Texas Relays, catapulted himself into the No. 6 spot on LSU’s all-time performance list in the hammer throw with his winning mark of 209-7. Sam Houston State’s Brek Christensen finished runner-up in the event with a mark of 192-5, while LSU’s David Collins opened his sophomore season with a new personal best of his own at 181-7 to raise his PR by nearly 20 feet from a season ago.

A native of Sierra Vista, Ariz., Tuttle also threw a season-opening mark of 208-1 to finish runner-up in the men’s javelin throw as the top Tiger in the event on Saturday afternoon.

While Tuttle took second place in his first javelin competition of the 2014 outdoor season, Wales emerged victorious in her collegiate debut after throwing a season-opening personal best of 166-11 to lead a Lady Tigers sweep in the women’s javelin. Wales already cracks LSU’s all-time Top 10 list in the event as the No. 5-ranked javelin thrower in school history with her collegiate debut of 166-11, breaking her previous PR of 158-3 that was set during her senior season at West Monroe (La.) High School in 2013.

LSU took the top four spots in the event as Wales was followed by sophomore Mayme Cook (152-9) in second place, sophomore Doren Welch (149-2) in third place and freshman Ali Brasuell (142-6) in fourth place with their performance. Like Wales, Brasuell’s season-opening mark of 142-6 set a personal best in the event in her collegiate debut.

Primeaux enjoyed an outstanding opening to his junior season outdoors as he not only took home the men’s 3,000-meter title with a run of 8 minutes, 43.17 seconds, but he also set a personal best in capturing second place in the men’s 1,500-meter run with a 3:51.16 clocking. Primeaux was an SEC scorer in the 1,500 meters a year ago when he earned a career-best eighth-place finish at the SEC Outdoor Championships.

Aguilar completed the sweep when she won the women’s 3,000-meter title by more than 40 seconds over her nearest competitor when she crossed the finish line in 10:27.20 in her first action outdoors in 2014.

After ending his indoor season with a lifetime best of 1:49.37 in winning the 800 meters at Notre Dame’s Alex Wilson Invitational, Henderson opened his outdoor season right where he left off by setting an outdoor PR of 1:49.80 to win the men’s 800-meter title at the Jim Mize Invitational on Saturday afternoon. Henderson has now run 1:49 in three of his last four 800-meter races dating back to the indoor season.

Lady Tiger freshman Morgan Schuetz raced to a lifetime PR of her own in the women’s 800 meters on Saturday afternoon as she clocked 2:08.67 for a runner-up finish in her collegiate debut outdoors.

Also kicking off his 2014 outdoor campaign on Saturday afternoon was Tiger junior Rodney Brown, who was runner-up in the men’s discus final with a season-opening mark of 191-0. Brown finished second in the event to the winning mark of 200-11 by Jamaican international Jason Morgan. Brown is certainly an NCAA title contender in the event as a junior in 2014 after setting his personal record of 206-3 at the Texas Relays a year ago, while also earning All-America honors with a fourth-place finish in his NCAA Championships debut in the event.

With their 2014 outdoor season opener now in the books following their performance at Louisiana Tech’s Jim Mize Invitational, the Tigers and Lady Tigers will next make their annual trip to Austin, Texas, next weekend to compete at the 87th Clyde Littlefield Texas Relays that will run March 26-29 at Mike A. Myers Stadium on the campus of the University of Texas.