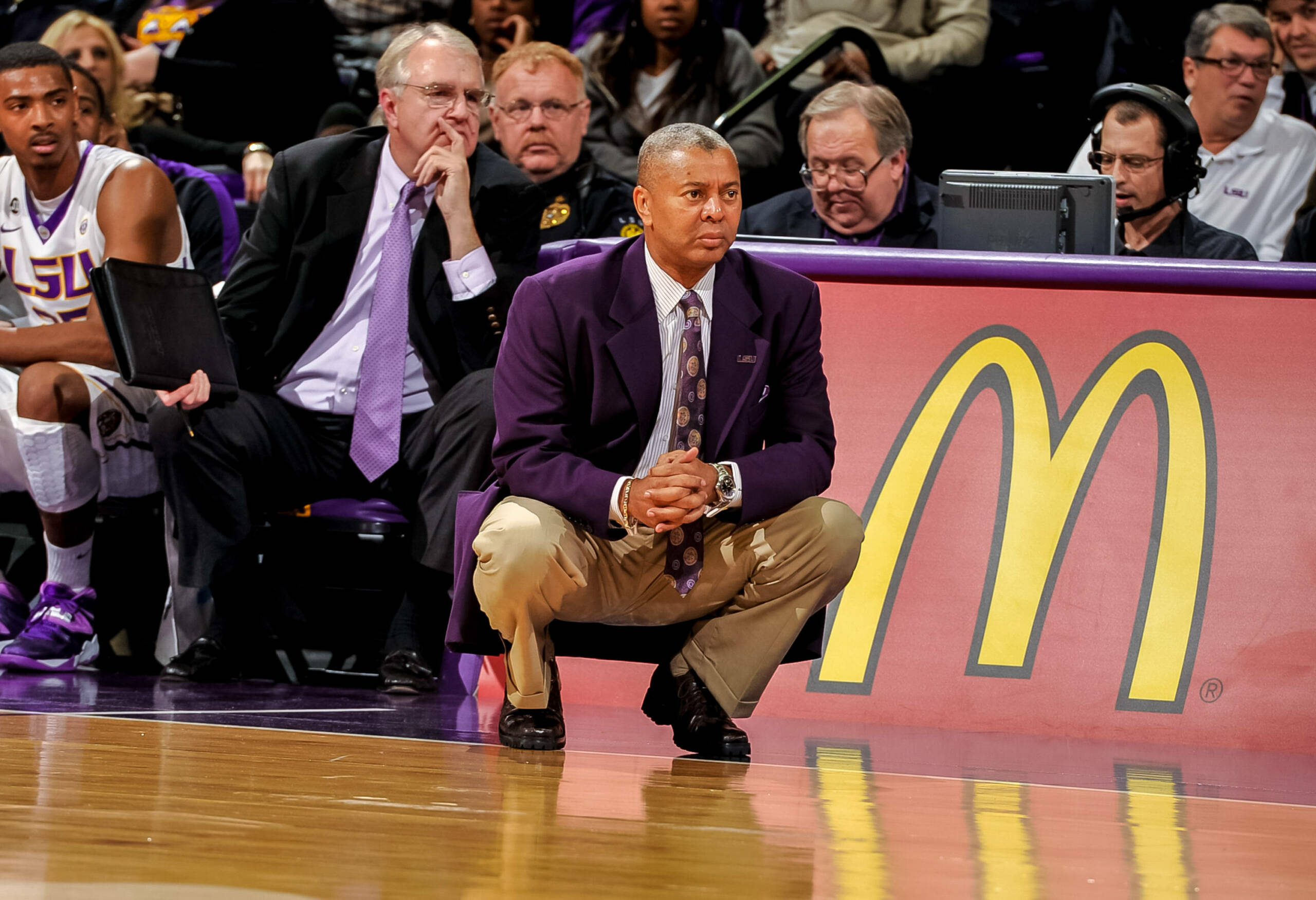 Game time is 8 p.m. CT in the tournament’s second round and the game will be nationally televised by ESPN with the game also broadcast on the affiliates of the LSU Sports Radio Network.

The winner of the game between the Tigers and Mustangs will face the winner of No. 2 seed California and No. 3 seed Arkansas in the quarterfinals on Wednesday. If LSU wins, the Tigers will be on the road playing for a chance to go to New York City for the semifinal round on April 1.

Here are some of Coach Jones’ comments Friday to the media:

Opening Statement…
“I’m really proud of our guys’ effort the other night at San Francisco. I thought we did a tremendous job especially one with the quick turnaround, travel involved, quick scout team that we weren’t familiar with and playing on someone else’s home floor. From them to be as focused as they were to have an opportunity to come out with a victory and advance, (we) look forward with that type of focus and will need more of the same coming into our next game on Monday against a very talented SMU basketball team – a team that’s been ranked in the top 25. A lot of people had them penciled in as an NCAA tournament team. It’ll be certainly a great challenge for us against one very talented basketball team, and Larry Brown has done a tremendous job in his second season there at SMU. We certainly look forward to that challenge with our guys coming into Monday night.”

On what makes SMU good…
“Their guard play, Nic is a very good player, Nic Moore. Nick Russell, a transfer, a local kid that transferred back from Kansas State. Big guy (Markus) Kennedy, a solid post guy, is very tough inside. They can spread the floor. They’re really quick, and they’re a very solid defensive basketball team. They’ve been difficult to score on by their opponents all year. I think they somewhat hang their hat on the defensive end of the floor, but they have the ability to be very good on the offensive end as well.”

On the depth of SMU’s team…
“They can run about 10-11 guys deep which is really good for them, and all of those guys are very capable scorers. They’ve got a couple of guys that are double-figure scorers (Markus Kennedy and Nic Moore) and someone else around nine (points per game – Nick Russell). When you have guys around six – five and six points a game like that – you have that deep a bench. Guys playing anywhere from the bench about 15 minutes a game, that gives you an opportunity to do a lot of things. They’ve really put themselves in position to play a lot of guys, and they can try and wear you down.”

On LSU’s rotation…
“Our game and the pace of it will really dictate sometimes what we’ll have to do. Because of injuries or whatever, the setback to Malik (Morgan), and we had to obviously look elsewhere for someone to try to get those minutes. That’s what I thought – Shane (Hammink) came in and gave us some very positive minutes the other night at San Francisco. It will certainly depend on the pace of the game and how the game is unfolding.”

On SMU’s Coach Larry Brown…
“One, I have a great deal of respect for him. I’ve known him for a long time. A high school teammate (of mine) had an opportunity to play for him and was recruited by those guys at UCLA. So, I’ve been very aware of him. He’s done a tremendous job on the college (level) and in the pros and back at SMU. I have a great deal of respect really for what he’s doing, but we certainly have to really prepare our team. I’ve got to try to really get our guys really ready knowing that their team will be well-prepared and certainly ready for our basketball game.”

On Jordan Mickey‘s attitude returning home to Dallas…
“Really good – I think that just shows the sign of maturity when you talk about a freshman because we’ve gone on road trips this year. One of the things that we talk about, even in the preseason, when we travel it’s a business trip. We’re not on vacation. We have to make sure that we have that type of focus. For him to still have that mindset and that’s not something that I’ve had to talk to him about, that’s just how he will prepare himself. That’s good to know that he has that type of vision, and that type of focus going in because it will be important. He will certainly have a lot of fans and relatives and high school teammates and you name it at that game. But he’s been in front of it and around it before, he’s performed at a great level. We look forward to more of the same.”

On how SMU’s coach Larry Brown’s approach to building his program…
“I think one – you just have to make sure you come in and implement your philosophy. I think that’s the most important thing. Then, try to make sure that you put the right people in your program for the long haul, and it’s not a quick-fix. I think it’s important that you have and be mindful of not just building teams for just having winning seasons like he hadn’t done that, but in terms of building program. He’s got good people, the right kids. He’s taken some transfers and guys that really fit into his system. I think that’s really important. He’s done a great job with it, and they’ve competed at a certain level.”

On if having common opponents with SMU helps with the game plan…
“Well, you can possibly look at some things especially in the latter part of the season.  In things that they did against a team – like we looked at Memphis and if we had a scout on Memphis and what their strengths and weaknesses were, we were able to pull some things from that. But the latter part of the season when you’re playing, you’re generally doing some things different. Larry (Brown) is the kind of guy that he can tweak and change some things with his basketball team that may be beneficial for them down the stretch. I’m sure he will do some things different defensively or whatever they may not have played that way. I’m not sure how many guys they have like a Johnny O’Bryant III that they have to defend on a nightly basis really in their league and how they play. Those are the things you have to look at in what they do against certain personnel, and that will be important for us.”

On Jarell Martin‘s being self-starter or having coaches motivation …
“I think our guys have done a good job of understanding what we look for in terms of executing what we do offensively but understand the freedom they have as well. If they’ve got an advantage or there is a breakdown – how to make plays. We certainly have a lot of plays and sets that we run. But at the same time, we have got to teach our guys how to play because of scouts and things that people take away from us. I thought Jarell did an excellent job of reading what they were trying to do defensively and took advantage of those things early on. I think you saw his confidence. He may be shot a ball a little short early on and missed the second one but continued to be a very confident player in the way that he exploded in that first half. But I think you can look at his second half and minutes played, he wasn’t one of those guys regardless of how well he played in the first half that he wasn’t out there shot hunting. He was still mindful of what we were trying to do as a team and fed off and allowed those other guys to do what they needed to do as well.”

On the team’s defense at this point in the season…
“We are certainly not where we’d like to be. We have probably fallen a little short of where we would like to be at this time of the year defensively in terms of communication, rotating and some of the things we have mixed up. We have played a little bit more zone than we’ve played in the past. In doing that, you have to spend an ample amount of time on those things – be it your pressing, your man-to-man and those things. We have got a lot of new faces on our basketball team as well and getting them adapted to what we need to do what you want to do on a certain level. So defensively, we probably haven’t been hitting on all cylinders like we would like or the championship caliber defensive team that you would like to be. We understand that, we are mindful of it but we are working extremely hard at it every day. I’ve been watching some of those NCAA games. Unfortunately, those guys getting hit with back door lobs and cuts too. It is one of those things that people execute their offense at a high level, and they are going to get you. But to get teams when your defense is able to dominate their offense is when you get better. When you do that at a high level, you have a chance win some games. Everybody is not there, and we happen to be one of those teams.”

On SMU’s guard play…
“Extremely quick – he’s (Nic Moore) fast, quick, can shoot the ball and he really runs their team. Their team really feeds off of his ability out there at the point. Nick Russell, a really good guard as well. I had an opportunity to watch him and tried to recruit him out of high school. He was there in Dallas, and he ended up going to Kansas State. He’s transferred back in there (to SMU) and has done a really good job for them. He’s been solid.”

On whether the San Francisco win was a breakthrough win in the NIT…
“Yeah, I thought it was a breakthrough when we saw our name come up on Sunday. Guys got excited about it. A lot of times, I think that was one of the big questions – how motivated was the team to be playing in the NIT? It’s a huge deal for them, and I think a lot of been made playing on the road this year. It wasn’t a neutral site game. You look at the NIT, it’s a real difficult deal if you have to go play on someone else’s home court until you get to the Final Four which is held in New York. When you are out there playing, it is really difficult – their fan base, their team, their court and their home crowd. It makes it tough for our guys to go into that type of environment and play the way that they did the other night and come out with that huge victory. At the end of the day, we got a nice lead on them. We knew they weren’t going to quit playing. They continued to fight. They didn’t get to be top three in their league by accident, and they played that way. They are a very good basketball team. Our guys did a good job of focusing and being able to handle all the things we were faced with to get out of there.”