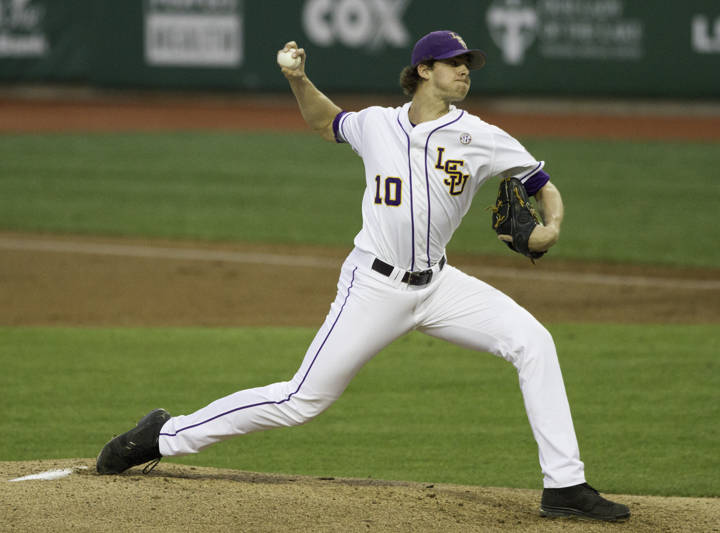 BATON ROUGE, La.— No. 6 LSU posted its ninth shutout of the season Friday night in a 4-0 win over Georgia at Alex Box Stadium, Skip Bertman Field.

The Tigers (19-4, 2-2 SEC) are just one shy of the school record for shutouts pitched in a season. The 1996 LSU squad fired 10 shutouts en route to the national championship. Georgia fell to 14-9 overall and 1-3 in league play.

Saturday’s game will be televised by  Cox Sports Television, and fans can listen to the game on the LSU Sports Radio Network (98.1 FM in Baton Rouge).  Live video, audio and stats of the game will be available at www.LSUsports.net/live.

“Each time Aaron Nola pitches, I gain greater admiration for him,” said LSU coach Paul Mainieri. “He was obviously the story of the game tonight. He had some early issues with the strike zone, but he persevered and gave us a tremendous performance. He always keeps his composure no matter what the situation, and he carried us to the win tonight.”

In relief, junior left-hander Zac Person pitched two innings, allowing only three hits and striking out a season-high four batters. Joe Broussard entered the game in the ninth inning and recorded the final out with a strikeout.

The Tigers got off to a fast start, taking a 2-0 lead in the second inning. With runners on the corners, Kramer Robertson hit an RBI groundout to score Christian Ibarra. Sean McMullen followed with an RBI double down the right field line to plate Chris Chinea.

Robertson added another run on an RBI groundout in the fourth inning to plate Ibarra.

Kade Scivicque started off the fifth inning with a single through the left side. Scivicque moved to second on a ground out by Conner Hale, and Ibarra followed with a  double down the right field line to score Scivicque and make it 4-0.

Ibarra was 2-for-3 on the night with a double, one RBI and two runs scored, while McMullen was 2-for-3 with one double and one RBI. Chinea had a pair of  hits and scored a run, and Robertson contributed two RBI.

Georgia starter Ryan Lawlor (2-2) was charged with the loss as he surrendered four runs on eight hits in 4.2 innings with three walks and one strikeout.