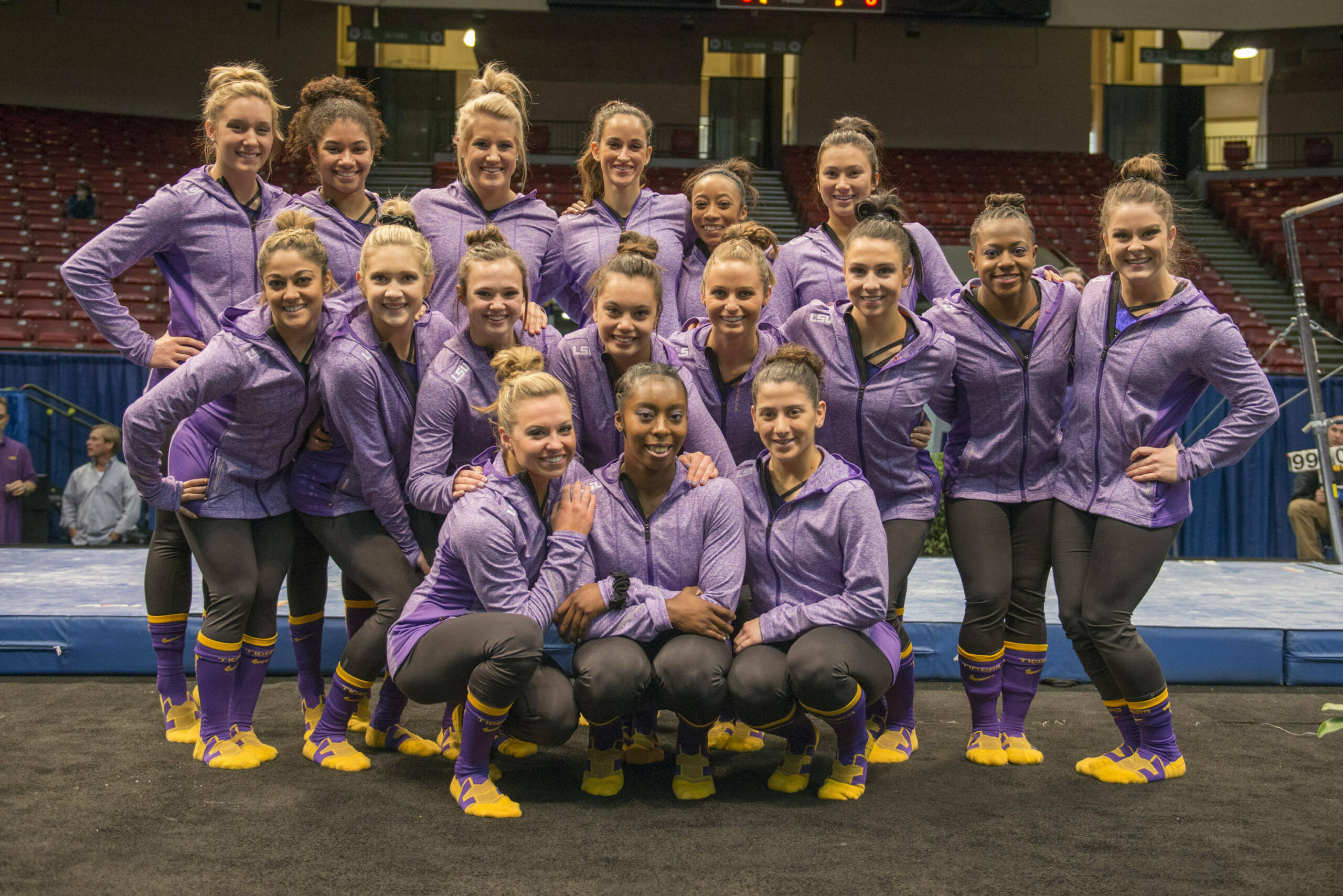 BIRMINGHAM, Ala. – With the most successful regular season in school history behind them, the second-ranked LSU gymnastics team turns its attention to the start of postseason competition beginning with the Southeastern Conference Championship at 6 p.m. CT Saturday in BJCC Arena.

On the eve of the championship meet, LSU (10-3, 5-2 SEC) took in a practice day at the arena, getting a feel for the equipment. As the No. 2 seed in the meet, the Tigers began practice on bars and moved to beam, floor and vault. LSU shared the practice session with No. 1 seed Florida, No. 3 seed Alabama and No. 4 seed Georgia.

Each year the SEC Championship features several of the nation’s top-ranked teams, and this year is no different as No. 2 LSU squares off against No. 1 Florida, No. 4 Alabama and No. 6 Georgia in Session Two. No. 12 Auburn, No. 16 Arkansas, Kentucky and Missouri will take part in Session One that begins at 2 p.m. on Saturday.

“We are excited and anxious to get going,” Breaux said. “Our scoring potential is as good as anybody in the meet, and we have to perform our best to come out on top. This team feels like they’re special and that they can go in there and win this.

“It will be a fun meet like it always is, and I know we are prepared to do our best.”

LSU enters the meet on the heels of a 197.800 score, the fourth highest in school history, against Kentucky on March 14. It marked the Tigers’ ninth straight team score of at least a 197, breaking the school record of eight straight 197 scores set during the 2004 season.

A nation-leading seven Tigers are ranked in the Top 25 in at least one event, a number that includes Rheagan Courville, Kaleigh Dickson, Lloimincia Hall, Jessie Jordan, Sarie Morrison, Britney Ranzy and Jessica Savona.

The Tigers will match up against three teams who enter the championship meet with their own momentum. Florida is coming off a 198.200 performance at Missouri in its last meet, while Alabama posted a 197.925 at home against Auburn. Georgia went on the road to Utah and scored a 197.600.

All four teams competing in Session Two are ranked in the Top 10 nationally in every category, including LSU who is No. 1 on vault, No. 3 on bars and No. 4 on beam and floor.

This marks the second year of the two-session format of the SEC Championship, and last season’s second session also featured these four squads. Florida won the title last year with a 198.000, while Alabama and LSU were a close second and third with a 197.800 and 197.700, respectively. Georgia finished fourth with a 197.325.

Live audio is available free of charge inside the Geaux Zone at www.LSUsports.net/live with Mike Smith and Shelby Prunty set to call the action.

ESPNU will televise the meet on a tape delay with the first airing scheduled for March 27 at 4:30 p.m. The meet will also air on ESPN2 on March 29 at 10 a.m.