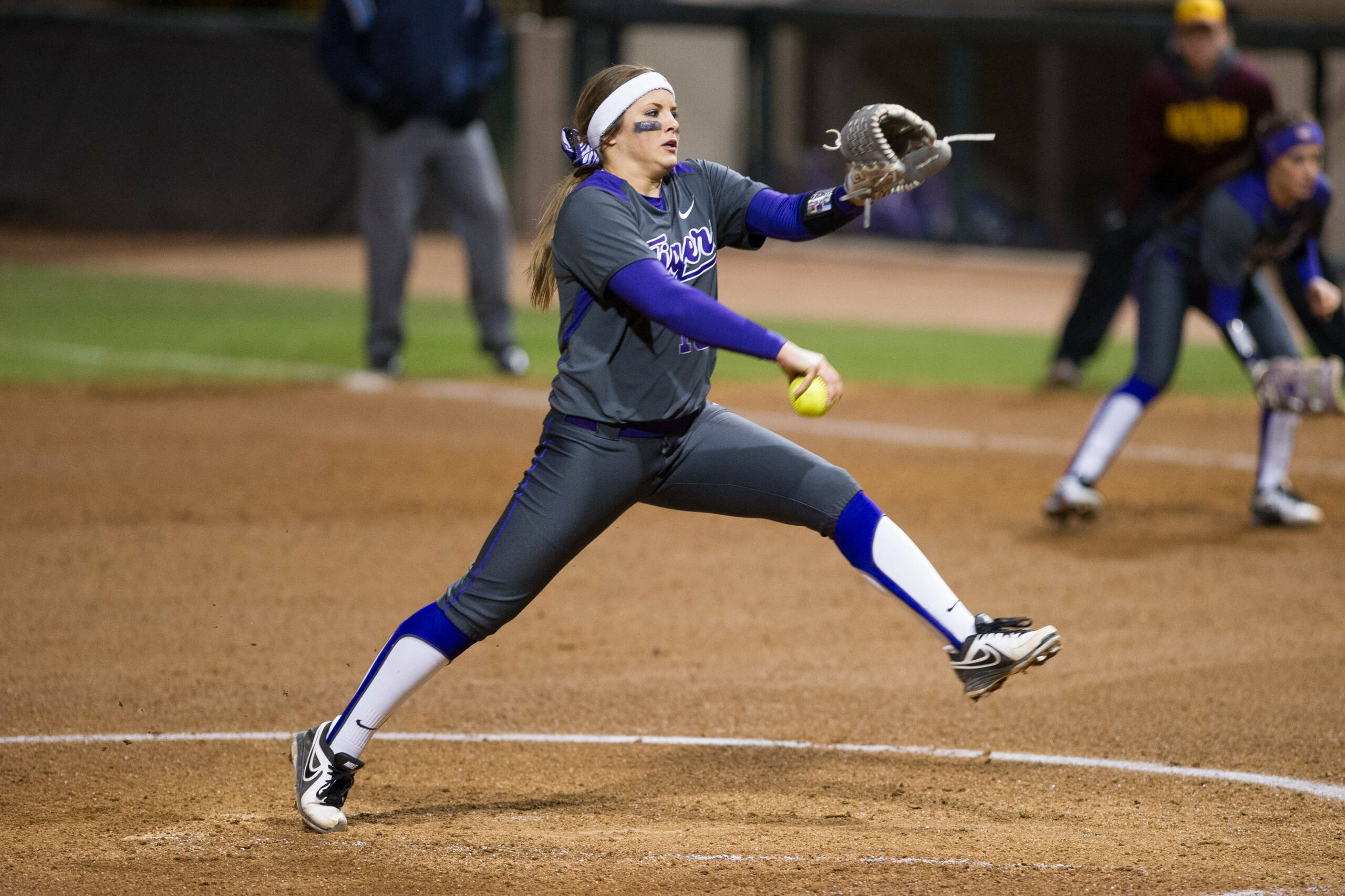 THIBODAUX, La. – The LSU Tiger softball team put together two big scoring innings in the second and fifth and it would be all starting pitcher Baylee Corbello would need as she held the Nicholls State University Colonels to just one hit on the night in a 9-0 win in five innings at the Colonel Softball Complex in Thibodaux.

The Tigers (19-10) wasted little time jumping on the Colonels (8-22), scoring four runs on four hits in the second inning and getting five in the fifth on three hits to overwhelm Nicholls and put the game away three outs later. LSU had no less than three runners on base in three of the five innings, including batting around in the fifth and nearly pulling off the same feat in the second as well.

After seeing two games of action over the weekend, including throwing over 180 pitches against Florida last Friday, Corbello had a perfect game going until a bloop single in the fourth, snapping a 10-batter retired streak which began in the first inning. Corbello moved to 9-3 on the season after finishing with 12 strikeouts, no walks and no hit batters as she struck out seven-straight at one point and closed the game with four consecutive.

“That was one of the best days I’ve seen her have this year, and she’s just a freshman so we’re learning as we go,” head coach Beth Torina said. “It was nice to see her go out and not give up any walks or any free passes. That was her goal for tonight. She did a really good job and accomplished what she set out to do.”

Allison Falcon and Bailey Landry each had solid days at the plate for the Tigers, as Landry went 2-for-3 with an RBI while Falcon went 2-for-2 with an RBI and run scored. Eight different LSU batters garnered a hit for the team on the night, as A.J. Andrews had a double to extend her career-long hitting streak to 11 games with three RBI, while Constance Quinn drove in two in her only plate appearance of the night with a run scored.

With one out in the top of the second inning, Sandra Simmons walked to put one on for the Tigers. After stealing second and advancing to third on a wild pitch, Falcon singled through the left side to score the LSU first baseman to make it 1-0. Falcon moved to second after an error on her single, as Corbello followed that up with a hit to put runners at the corners.

Jacee Blades was hit to load the bases, as Andrews connected on a screamer that went over the head of the left fielder to score Falcon and Corbello to make it 3-0, with Blades getting caught in a rundown after passing third for the second out of the inning and Andrews taking the base on the same play. Landry earned her second hit of the game and fifth of the inning to plate Andrews to make it 4-0 Tigers.

Bianka Bell led off the top of the fifth inning with a sharp single through the left side to open the frame. Sahvanna Jaquish followed that up with a single off the glove of the second baseman to put two on with no outs for the Tigers. Kellsi Kloss got hit to load the bases for LSU, as Simmons drew a walk to bring in Bell and make it 5-0. Quinn made her first at-bat of the game count as she singled through the middle driving in two to make it 7-0 Tigers, advancing Simmons to third and her moving to second on the throw in.

Kailey McCasland came on to pinch hit and hit an infield grounder to score Simons to make it an eight-run lead for the Tigers with no outs, advancing Quinn to third to put runners at the corners on the fielder’s choice. Layna Savoie came on to pinch run at first and stole second to put two back in scoring position. After a strikeout by Hailey Smith for the first out, Andrews hit it to deep center, allowing Quinn enough time to trot in to make it 9-0 on the sacrifice fly for the final run of the inning.

“The team hit the ball well and gave me runs to work with and as a pitcher it’s a real confidence boost,” Corbello said.

LSU will be back in action this weekend, traveling to take on reigning national champion Oklahoma with a two-game series beginning Saturday afternoon in Norman.

On Baylee Corbello‘s performance in the circle
“That was one of the best days I’ve seen her have this year, and she’s just a freshman so we’re learning as we go. It was nice to see her go out and not give up any walks or any free passes. That was her goal for tonight. She did a really good job and accomplished what she set out to do.”

On wanting to get more players in the game
“I still would have liked to get a few more players in the game. It’s unfortunate that we left a few zeros up there in some frames and I would have liked a few more to get opportunities, but Nicholls is a good team and a good program, and you can’t leave anything to chance. At any moment they are capable of scoring and getting right back in the game. I just didn’t want to take a chance with that, but I have some great kids and some great players and all 20 of them deserve to play.”

On her pitching performance against the Colonels
“We’ve been working hard on getting ahead and staying ahead of batters in games. Just trying to be as efficient as possible. We’ve been having trouble with walks and that’s something that we worked on in practice. Our catchers have been great with framing pitches and coach calling great pitches.”

On thinking about pitching a perfect game during the game
“I try not to think about things like that during the game. I just take it one batter at a time and be as efficient as I can.”

On the play of the team around her
“Nicholls has some great slappers, but Tammy (Wray) at third with her release is hard for anybody to get safe with her there and the same goes for the group. The team hit the ball well and gave me runs to work with and as a pitcher it’s a real confidence boost.”