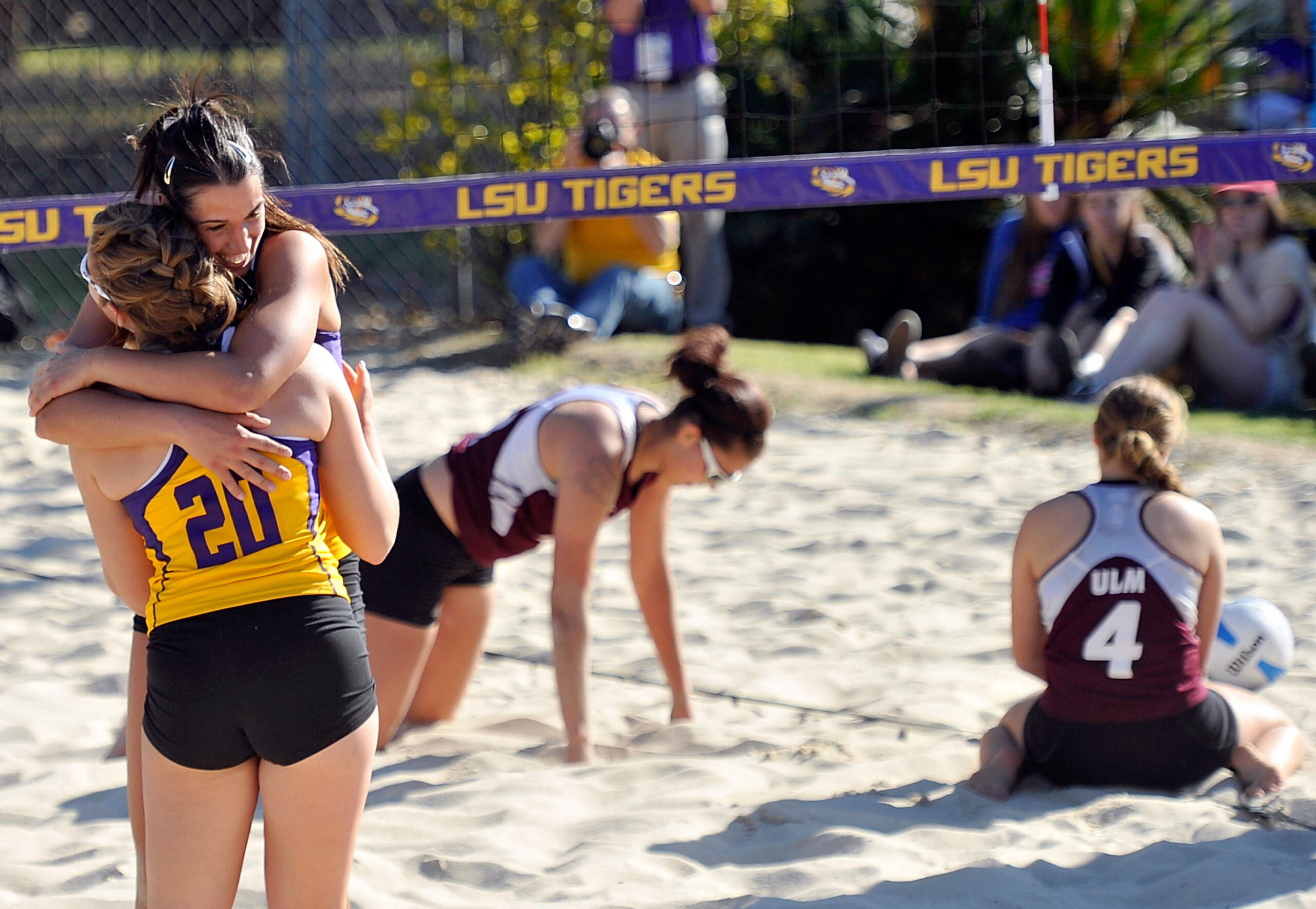 BATON ROUGE – The LSU sand volleyball team marked a close 3-2 loss to UL-Monroe in its inaugural match Tuesday at Mango’s Beach Volleyball, as the winning point was decided by a third-set victory.

Emma Hiller and Katarina Raicevic set the tone for LSU by taking the first match of the day and marking LSU’s first court victory in program history. The fifth-seeded pair managed a quick 21-19, 21-15 win over the Warhawks’ Celine Flores and Kaitlyn Shearer.

“They did exactly what we needed them to do,” associate head coach Russell Brock said of Hiller and Raicevic. “They served tough, they controlled the ball and they hit good shots. In sand volleyball, sometimes you don’t get a ton of opportunities, and consequently, the matches tend to be tight. They did a really good job of taking care of opportunities when they got them. If they happened to run a ball down, they’d put a good shot on. They were really able to execute and score when it mattered, and they closed out games.”

Malorie Pardo and Mimi Eugene followed with a 21-16, 21-19 loss to UL-Monroe’s Alannah Cullum and Rachel Arnason in the fourth seed.

The top-seeded court saw competition between Meghan Mannari and Katie Lindelow and the Warhawks’ Zuzana Markova and Marcela Araya. After falling 21-15 in the first set, both teams fought neck and neck before UL-Monroe pulled away and took a 21-17 second-set win.

Second-seeded senior Kaitlin Hatcher and junior Helen Boyle tied up the score after coming from behind to notch a three-set victory over the Warhawks’ Michelle McNamee and Hadley Swartz. The duo fell 21-14 in the first set and rallied through a long second set stopping numerous UL-Monroe match points for a 29-27 triumph as Hatcher knocked it over the net. The pair then took the third set with ease, 15-8.

The deciding match was placed on Victoria Boraski and Cati Leak‘s shoulders after the third-seeded team pulled away early from the Warhawks’ Blanca Ocana and Hope Pawlik for a 21-17 first-set victory. UL-Monroe fought back in the second set, taking a quick 4-0 lead and eventual 21-15 win. Boraski and Leak continued to fight, but the Warhawks got away with a 15-10 third-set victory and the match.

“We had simple goals going in, and I think we achieved those goals today,” Brock said. “We executed to the highest degree that we wanted to, we worked hard and we had fun. It’s going to be more fun when you win, but for the most part, just being out here and being in this environment, we just want to have the opportunity to do those three things. I would have loved to have a win on the first match, but I can’t overemphasize how much I appreciated how hard the team played. I think it was a great start. It could have been a little greater, but I have no regrets on how they played or what they did. It was inspiring.”

The sixth-seeded exhibition competition was between LSU’s pair of Briana Holman and Haley Smith against LSU’s Khourtni Fears. Holman and Smith marked a quick 21-15, 21-14 win.

The Lady Tigers will face their next competition this weekend as they travel to the Gamecock Invitational Friday and compete through Sunday, taking on the College of Charleston, Oregon, South Carolina and Mercer.