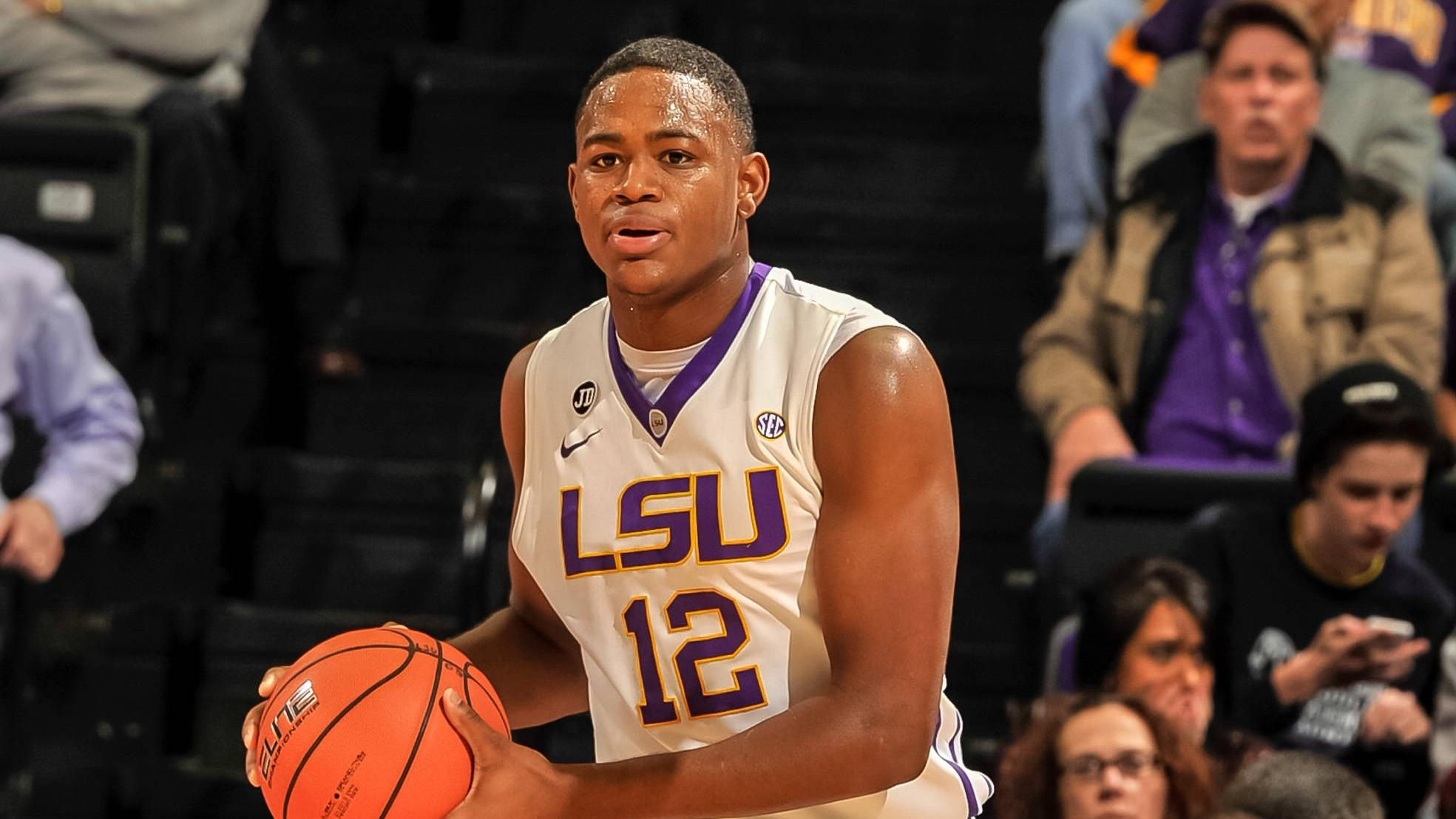 The game is set for a 7 p.m. PDT (9 p.m. CT) and will be the next-to-last game played in the first-round of the 32-team event. The LSU-San Francisco game will be televised on ESPNU with Roxy Bernstein and Bill Walton on the call.

The radio broadcast with Jim Hawthorne, Ricky Blanton and studio host Kevin Ford will be available on the LSU Sports Radio Network affiliates (listed below).

San Francisco is 21-11 overall and lost in the West Coast Conference semifinals against BYU, 79-77, in overtime to stop a six-game winning streak into this first ever basketball meeting between the two schools.  The Dons have their highest win total since the 1981-82 season. Rex Walters is in his sixth season at USF and the Dons start four players averaging in double figures led by senior Cole Dickerson at 14.8 points per game and 7.7 rebounds a contest.

Also averaging in double figures for the team is Avry Holmes at 12.6 points, Kruize Pinkins at 12.3 and Mark Tollefsen at 10.7 points per game.

LSU is in the SMU quadrant of the NIT bracket as the No. 5 seed with San Francisco the No. 4 seed. LSU will play the winner of Wednesday night’s game between top seed SMU and eighth-seed UC-Irvine at some point between Friday and Monday. The ESPN family of networks has one window on Friday and Saturday, two on Sunday and three on Monday that the game could be slotted into.

Also in that quadrant is No. 2 seed California which hosts Utah Valley and No. 3 seed Arkansas from the SEC which hosts Indiana State. The survivor of those four teams will meet the team still left from the top four teams next week in the quarterfinals for the right to go to New York City for the NIT semifinals on April 1. The championship game is set for April 3 in Madison Square Garden.

Coach Johnny Jones met with the media prior to their departure and here were some of his comments:

Opening Statement…
“After last night and finding our fate in this year’s postseason tournament, we look forward to getting back to work today in preparation for playing a very good San Francisco basketball team. It’s going to be a great challenge for us. Look forward to getting out of here tomorrow, getting to San Francisco, having a good practice, prepping for their team and playing on Wednesday night. Our guys are excited about it. Our staff is certainly excited about it and really glad to see that we’ve got three other teams besides ourselves in the NIT. We’re hopeful that one or two of them would’ve been in the NCAA Tournament, but we certainly wish those well in the three teams that we got into the NCAA Tournament in Florida, Kentucky and Tennessee.”

On the NIT being motivational…
“It should be. When you talk about the history of the NIT, the greatness of it, it used to be the big tournament. It was the one that everyone wanted to get into. Now we know that the national championship, the NCAA, is the big tournament. Every team’s goal is to try to reach that pinnacle. Have an opportunity to be one of those 68 (teams) to have an opportunity to vie and play for a national championship. Unfortunately, we fell short of that mark and disappointed at that. At the same time, we have an opportunity to continue to play in the NIT which will give our guys an opportunity to challenge and compete for a championship there as well. We’ll certainly be motivated, excited about it and the teams that you see throw it up at the end of the year – that team that cuts those nets down at the NIT is very emotional at that time because they’ve won the last game of their season, and that’s always big.”

On why his team should be motivated…
“I think they will be motivated one, because they have an opportunity to continue to play. I think if you have a senior-dominated basketball team that have put themselves in position and may have been in the NCAA Tournament and have been in postseason play and have had that experience. At the end of the day if they wound up in the NIT, I’m not sure where that motivation may lie with that basketball team. But I think with the makeup of our team with the underclassmen that we have, and we have a couple of seniors that hadn’t had the experience or to embrace the NCAA Tournament – this is a great opportunity for them to continue to play and leave their mark. This is what we’re faced with so we’re certainly going to put our best foot forward.”

On comparing San Francisco to another team played this season…
“They would kind of put you say for instance in our league maybe without all the size and some of the athleticism – it may be a Georgia in a sense with their guard play, the ability to shoot and execute offensively – the way that a couple of their post guys play. That would be more probably one of the closer matches that I would say in our league.”

On the postseason getting a start on next year…
“I think it helps. Anytime you can get into postseason play, it’s different. The one when you’re in conference play – the intensity level always rises, and you really know your opponent. But at the same time when you get into postseason play, it’s different. You know that you’re in a situation to survive and advance or your season is over. There’s no more tomorrow. I think everyone has the ability to play with an edge at that time. This will hope, teach and prepare our guys hopefully for the future when we find ourselves in postseason play.”

On how positive a postseason win would be…
“Winning is always healthy.  It’s always an exciting time, and I think it’s always a great momentum builder for your program when you are able to do that. You get excited about it, at the same time. So winning will certainly feel like you have momentum going forward especially in this event and something that we look forward to. We’re hopeful to getting New York would certainly put us in a position where you are even more excited and more to build on and more to sell for the future.”

On the type of team San Francisco is and if the head coach has evolved over time…
“They have evolved and changed. I think the makeup of his team and his players they have a different level of talent there at San Francisco. He’s (Head Coach Rex Walters) the same basketball coach. They run a lot of similar things that Carolina and Kansas or where Roy Williams came from, a lot of things that they do. They set a lot of high ball-screens, and they are an up-tempo type basketball team. They are going to try to get it up the floor quick they average about 75 points a game. They want to score in the open floor. At the same time, they want to score in their half court settings they set a lot of sprint-to-screen action and play off of it and roll and the post guys can step out as well.”

On how your team is coming in to this tournament after Kentucky loss…
“That’s part of basketball. You get hit like that, and that’s the great part about it when you have the opportunity to play again in these postseason season deals. It’s an opportunity for you to get back up and compete again. We have been hit like that before during the season, and it’s that opportunity that you have to bounce back and we’re glad – you don’t want to go out like we did in that game. I thought we caught them (Kentucky) and they played probably one of their better games of the year in shooting, and defending, and rebounding, and aggressive in the way that they played. We are excited about getting back out there and playing a San Francisco team. Hopefully, we can bounce back and play much better at the end of the day than we did in that game.”

On letting veterans talk about previous postseason experiences…
“I think it’s always good any time you have it – I think that’s the great part about having veteran players is having the opportunity to talk about the experience. That’s what we wanted going into the conference tournament. When you have that, your guys don’t go into it blind.  A lot of times your coaches can sit there and talk until they are blue in the face or whatever. Sometimes, it can fall on deaf ears. If you get guys that have been in the arena and have played and they are sitting there next to them in the locker room and are constantly talking about it – the edge that you have to have, the intensity level and all those things. That’s the beauty of it. At the same time when you have guys that have been in that NCAA tournament that is great as well in what it takes to get there. That’s part of my motivation is trying to put yourself in there and have a group of guys that have been there.”