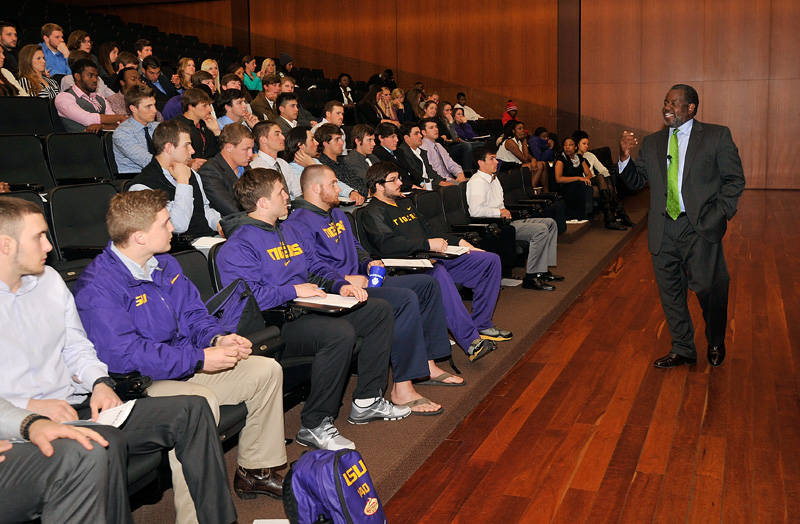 The second-year event was held in preparation for the Career Symposium set for April 1 in the Legends Club at 7 p.m. where former All-SEC LSU men’s basketball player and current radio analyst Ricky Blanton will serve as a keynote speaker.

“I think it was an important event to learn how to make a first impression and to know how important that is because you only get one chance at a first impression,” LSU football deep snapper Reid Ferguson said. “I think learning how to dress, how to shake hands and how to talk to business professionals was a really good outcome of this event.”

Former LSU defensive tackle and four-year letterwinner Greg Bowser (1979-82) followed up on Dr. White, explaining his career path through networking and stressing the importance of representing LSU in a positive manner.

“When you come back to your school and talk to guys who sat right where you were, you kind of have a picture,” Bowser said. “You want them to leave the University with a really good feeling about not only the time that they’ve spent here but the fact to understand that there was someone else that was where they were and was able to go on and achieve. What we want to do is instill in those guys that you know what, you’re not just representing yourself. You represent the people who came before you.”

Brenton Sumler, Life Skills Coordinator for CCACSA, concluded Networking 101 by engaging the student-athletes in interactive role-playing situations and challenging them to see what interactions were done correctly and incorrectly.

“I think it’s very helpful. I always know that networking is important,” LSU softball outfielder A.J. Andrews said. “I think that it just reopens my eyes to just how important it is because you really don’t know who is who and how much of an impact you can make on somebody you don’t even know.”