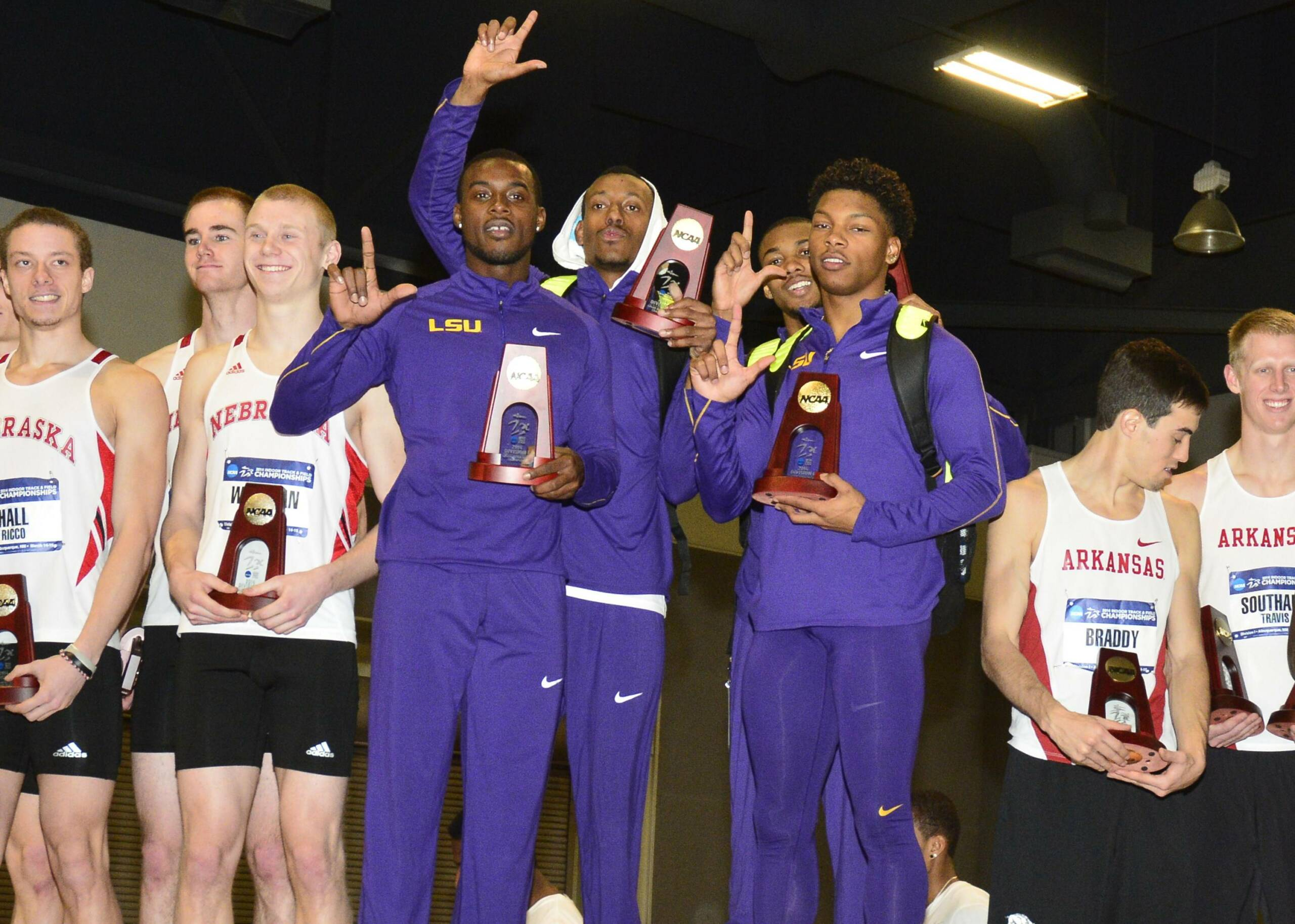 ALBUQUERQUE, N.M. – The LSU Tigers turned the tables on their Southeastern Conference rivals in Saturday’s finale at the 2014 NCAA Division I Indoor Track & Field Championships as they stormed to a dominating victory in the men’s 4×400-meter relay final to take home the mile relay championship in the meet’s final event at the Albuquerque Convention Center.

The Tigers snapped an eight-year drought as they were crowned the NCAA Indoor champions in the 4×400-meter relay for the first time since 2006 with their fourth NCAA Indoor title in the event all-time.

They also extended an impressive streak as the Tigers and Lady Tigers have combined to win at least one NCAA Indoor event championship in five-straight seasons dating back to 2010.

Running with a team of sophomore Darrell Bush, junior Quincy Downing, sophomore Cyril Grayson and junior Vernon Norwood, the Tigers led from the break in the third finals heat and crossed the finish line with their winning time of 3 minutes, 4.10 seconds to finish ahead of their SEC rivals Arkansas, Florida and Texas A&M in the race to avenge their third-place finish from the SEC Indoor Championships.

The Tigers cracked the Top 10 in the final men’s team standings while scoring all of their 18 points during Saturday’s competition to tie Texas A&M for eighth place overall. The Lady Tigers tied for 12th place overall in the women’s team race as they matched Auburn’s output of 16 points over two days of the competition.

Oregon became the third program in the history of the NCAA Indoor Championships to sweep the men’s and women’s NCAA Indoor team titles as the Duck men ran away with the men’s team title while totaling up 62 points to outlast the 54 points scored by runner-up Arkansas and the Duck women scored 44 points to edge Texas by the narrowest of margins as the Longhorns finished runner-up with 43.5 points.

Oregon’s men and women are the first teams in six seasons to win both NCAA Indoor team titles as they join LSU in 2004 and Arizona State in 2008 as the only schools to complete the championship sweep.

“What a way for both of our teams to go out in this national championship,” said LSU head coach Dennis Shaver following the meet. “You could tell just how much this championship meant to each and every one of our athletes that lined up today. This really is as competitive a group as we’ve ever brought to the NCAA meet with the way they performed over the two days. We brought 14 athletes here to Albuquerque, and I’m proud of the way they represented themselves, this program and LSU in our time here.”

Those attending the SEC Indoor Championships in College Station, Texas, two weeks knew they were watching a preview of the NCAA final when Texas A&M won the conference title in the 4×400-meter relay with the indoor collegiate record of 3:03.20, followed by Florida in second place at 3:03.50, LSU in third place at 3:04.04 and Arkansas in fourth place at 3:04.94.

They lined up against one another again in the third of three heats Saturday night in the final race of the 2014 indoor season at the NCAA Championships, but this time it was the Tigers’ time to shine.

And perhaps surprising to some, the Tigers led wire-to-wire to win the national championship after Bush gave the team the lead at the break on the first leg and clocked 46.46 seconds before handing off to Downing at the first exchange with a clear five-meter lead over leadoff legs by Florida and Texas A&M. Arkansas followed well back in fourth place at the first exchange of the race.

It was a truly inspirational performance by Bush to lead the way for the Tigers after he learned early Saturday morning of the sudden passing of his grandmother, Donna Roots, in his native New Jersey. The importance of his first leg was not lost Bush and his teammates as he put the Tigers in the position necessary to contend for the title from the start of the race.

“It was really important because you don’t want to be all bunched up as your trying to run the race. I knew I had to get out and give Quincy the space to run and keep the lead for us. I never slowed down, I just kept on pushing,” Bush said. “I put it all on the line for my team, and they had my back. I did it for my grandma too, thinking of her. It was just an emotional race for all of us tonight.”

Downing brought it around in 46.03 on the second leg before handing off to Grayson at the second exchange, and that’s when the fireworks went off in the race for second place behind the Tigers.

LSU’s path to the NCAA title was cleared for Grayson near the 100-meter mark on the third leg when Texas A&M’s Gregory Coleman and Florida’s Dedric Dukes took one another out of the race and earned both teams a disqualification in the official results following a lengthy protest. Grayson, who clocked an impressive 46.57-second split on the third leg, handed off to Norwood with a 10-meter lead ahead of the Razorbacks.

Norwood left little doubt as to which team would walk away with the title as he blistered the Albuquerque Convention Center track with a 45.05-second split on the anchor leg and crossed the finish line with their time of 3:04.10 to finish more than two seconds ahead of Arkansas’ 3:06.29 in the race for third place overall. The Tigers were also more than one second ahead of Nebraska’s winning time of 3:05.25 in the second heat.

“I’ve got to credit it mostly to Darrell Bush. He led us off in a great way to put us in that position to start,” Norwood said following the race. “We all did a great job, Quincy and Cyril. They stayed out of trouble and all that I had to do was just do my part and bring us home. It’s a great feeling to win it in the last race here.”

It was Norwood’s second race of the day as little more than an hour earlier he earned his first career All-America honors with the Tigers as the NCAA Indoor silver medalist in the men’s 400-meter dash.

After squeaking into the 400-meter final in the eighth and final qualifying spot with his time of 46.18 in Friday’s preliminary round, Norwood took control of his finals heat early and cruised to the victory in the second of three heats with a time of 45.46 ahead of the Notre Dame duo of Christopher Giesting (45.74) and Patrick Feeney (46.19).

Norwood’s 45.46 earned him the silver medal as the national runner-up after Texas A&M’s Deon Lendore was crowned this year’s NCAA Indoor 400-meter champion with his time of 45.21 in the third race ahead of the 45.52 clocking by Florida’s Arman Hall and 45.64 clocking by Oregon’s Mike Berry to finish in third place and fourth place, respectively, in the final event standings.

“That’s the most nerve-wracking feeling just sitting there waiting to see how fast they’re going to get out and if I even have a chance to win it. It is what it is when you run indoors,” Norwood said of watching their third heat from the infield. “I didn’t run the right kind of race in the prelim. I messed up running that first 200 the way I did. I came back and watched the video a bunch of times, and just talked with Coach (Dennis Shaver) of how I needed to run my race today. I got lane four today, so I knew I just had to go out and push it from the start.”

Saturday’s finale also marked the end of two outstanding careers indoors as Stowers and Pitts competed one last time while combining for 12 points with a pair of bronze-medal-winning third-place finishes.

Stowers made history in her final race in the 60-meter hurdles as a Lady Tiger as she smashed LSU’s 14-year-old school record to win her second NCAA Indoor bronze medal in the event in as many seasons and a fourth All-America honor indoors as one of the program’s most decorated performers during her four-year career from 2011-14.

Stowers recovered from a shaky start to the race and closed the gap on her competitors down the stretch before she crossed the finish line in 7.94 to finish just one one-hundredth of a second behind Arkansas State’s Sharika Nelvis in first place and Baylor’s Tiffani McReynolds in second place as each posted matching times of 7.93. Nelvis (7.923) took the title by seven one-thousandths of a second ahead of McReynolds (7.930).

“I wanted to win, of course, but I’m just so happy to break the school record and have that opportunity in my last race,” Stowers said. “When the gun goes off, I go blank until the end. At the end today, I thought that I would be up there, but I wasn’t sure if I did enough to win it or not. I didn’t have my best start today. I was surprised because Coach Shaver said I wasn’t fully set when he called the gun. I guess I just didn’t realize that, so that was tough to overcome. At 60 meters, you have to have the perfect start to really win it because the race is so short.

“I am so excited about outdoor because I’m so much better toward the end of my race where I’m able to make up a lot of ground if I do get a bad start. That’s always been the best part of my race because I always get a lot faster toward the end. I’ve been doing really well this season, I’m healthy and I’m really looking to going outdoor and hopefully breaking the school record there too.”

Saturday’s finale was like déjà vu for Pitts as she opened the triple jump competition by posting the exact same mark on her first attempt as she did a year ago with a jump of 43 feet, 3 ¼ inches to quickly move herself into second place overall after the first round of qualifying. And while her mark of 43-3 ¼ earned her a first career All-America honor with a seventh-place finish last season, she remained firmly in second place heading into the fifth round of jumps on this day as she trailed only the leading mark of 45-7 ¾ by San Diego State’s reigning NCAA Outdoor champion Shanieka Thomas.

Pitts dropped back into third place after she was passed in the fifth round by Auburn’s Marshay Ryan 44-0 ½, and while improving with a series-best of 43-9 ¾ on her sixth and final attempt, Pitts remained in third place and earned her best career NCAA Championships finish while taking home the bronze medal.

Thomas improved her winning mark to an impressive 45-10 in the sixth and final round of jumps to add the NCAA Indoor title in the triple jump to the NCAA Outdoor crown she won during the 2013 season.

“It feels awesome,” Pitts said of her career-best third-place finish nationally. “I’ve gone from 13th place to seventh to now third, so I feel like I’ve come a long way these last few years. When I first got here, I think I was just happy if I could jump 40 or 41 feet, so to be at 44 feet now as my indoor PR and to get third at nationals is a great feeling. It gives me the motivation now to go out and do it outdoors.”

With the 2014 indoor season now in the history books, the Tigers and Lady Tigers will look toward the start of the outdoor season as they will send a group of throwers and distance runners to Ruston, La., next week to compete at the Jim Mize Invitational being hosted by Louisiana Tech University at the Jim Mize Track & Field Complex on Saturday, March 22.