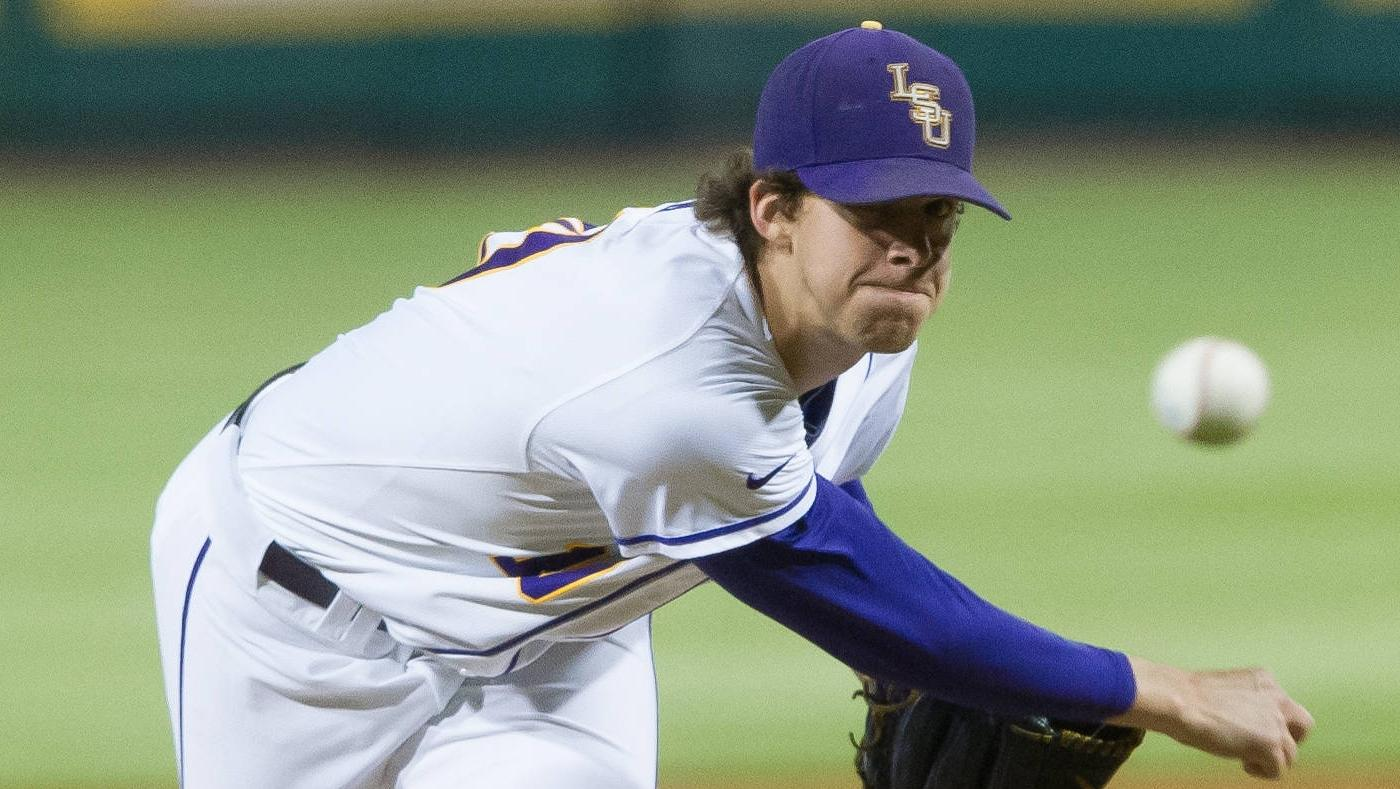 NASHVILLE, Tenn. – Junior right-hander Aaron Nola tied a career high with 12 strikeouts in 6.2 innings Friday night, and third-ranked LSU erupted for four eighth-inning runs to erase a 1-0 deficit, as the Tigers posted a 4-2 win over the Commodores at Hawkins Field.

LSU won its eighth straight game to improve to 17-2 overall and 1-0 in Southeastern Conference play. Vanderbilt, also ranked as high as No. 3 in the college baseball polls, dropped to 16-3 overall and 0-1 in the SEC.

UPDATE: The teams will now play a doubleheader on Saturday starting at 2:15 p.m. CT, with 45 minutes between games. The first Saturday game will be televised by Fox Sports Net (Cable Ch. 38 in Baton Rouge), and it can be heard on the LSU Sports Radio Network. The second game will be available on the radio network as well but will not be televised.

Live audio and stats will be available in the Geaux Zone at www.LSUsports.net/live.

“In my eight years at LSU, that had to be one of the greatest games I’ve seen,” said LSU coach Paul Mainieri. “Nola and Beede were both brilliant on the mound, and we made a tremendous comeback late in the game. It was a complete team victory – we used every position player we had in the dugout to win the game.”

LSU centerfielder Andrew Stevenson‘s two-run single with two outs and the bases loaded in the eighth provided the go-ahead runs for the Tigers. Prior to his final plate appearance, Stevenson had struck out three times.

“That just demonstrates the beauty of baseball and its power of redemption,” Mainieri said. “Andrew struck out three times, but he still comes through with the game-winning hit.”

LSU trailed 1-0 against Beede entering the eighth inning when the Tigers staged a rally. Beede struck out designated hitter Kade Scivicque to begin the inning, but third baseman Christian Ibarra reached on an infield single and first baseman Tyler Moore drew a walk.

Beede was lifted for reliever Brian Miller, who retired pinch hitter Sean McMullen on a fly ball to left field for the second out. Pinch hitter Jake Fraley, however, reached on a throwing error by Vanderbilt third baseman Xavier Turner to load the bases and keep the inning alive.

Stevenson then singled sharply up the middle to score pinch runner Jared Foster and Moore with the go-ahead runs. Vanderbilt second baseman Dansby Swanson then mishandled rightfielder Mark Laird‘s chopper to allow two more runs to score and give the Tigers a 4-1 lead.

The Commodores scored an unearned run in the bottom of the eighth against LSU reliever Parker Bugg, but Bugg and closer Joe Broussard blanked Vanderbilt the rest of the way to secure the victory.

Broussard struck out the final two Vanderbilt batters in the ninth to earn his fourth save of the season.

Zac Person (1-0), who relieved Nola with two outs in the seventh and recorded a strikeout, was credited with the win. Beede (4-1) was charged with the loss for the Commodores.

Vanderbilt had opened the scoring in the bottom of the second inning when designated hitter Ro Coleman lifted a sacrifice fly to score rightfielder Rhett Wiseman from third base.

The sac fly ended Nola’s streak of consecutive innings without allowing an earned run at 54. He had not allowed an earned run since May 23, 2013 against Arkansas in the SEC Tournament.