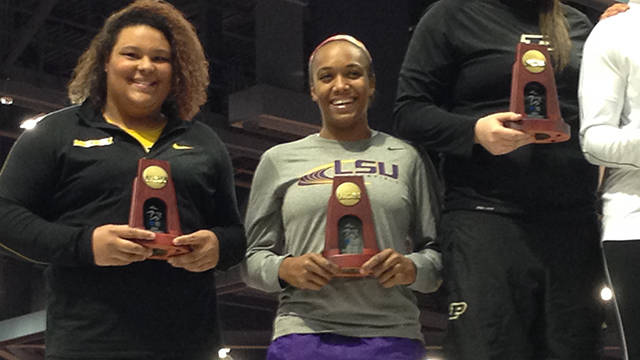 ALBUQUERQUE, N.M. – The third time proved to be a charm for Lady Tiger senior Denise Hinton as she made history while earning her first career All-America honor in the women’s weight throw with a fifth-place finish nationally to put the Lady Tigers on the scoreboard during Friday’s opener at the 2014 NCAA Division I Indoor Track & Field Championships.

While making her third career NCAA Championships appearance in the event, Hinton earned a spot in her first national final and became the first Lady Tiger in program history to earn All-America honors in the event as she threw a series-best of 70 feet, 7 ½ inches on her sixth and final attempt to score the first four points of the meet for the squad.

Hinton advanced to the final by grabbing the very last qualifying spot as her opening mark of 67-5 ¼ on her first attempt put her in ninth position to earn an additional three throws in the competition.

That’s when she took her performance to another level after raising her series-best with back-to-back throws of 69-10 ¾ in the fifth round and 70-7 ½ in the sixth round while climbing all the way into the bronze-medal position in third place as the other competitors took their final throws. Hinton wrapped up the competition in fifth place overall to earn her best career finish at the NCAA Championships.

While it was Hinton winning the SEC Indoor crown with a career-best mark of 73-11 two weeks ago, Texas A&M’s Brea Garrett turned the tables on her conference rival and won the NCAA Indoor title with her opening mark of 72-8 that stood as the winning throw during the competition. UCLA’s Ida Storm scored the silver medal with her best throw of the day at 71-10 ¼ in the fifth round, while Purdue’s Dani Bunch won the bronze in the sixth round while throwing her best of the day at 71-6 ¾ on her final attempt of the competition.

“I didn’t finish as high as I was ranked coming in, but I’m 100 percent OK with it,” Hinton said. “I had a first today. I’m an All-American. I’ve never been able to say that before, so I’m just so happy and just ecstatic to get to experience this for the first time. I was lucky to get a second chance after the prelims, and I took advantage of that second chance.”

Hinton described her emotions of having to wait through the third round of qualifying knowing that all it took was one throw from another competitor behind her to knock her out of the competition before the final.

“I was trying my hardest to keep my composure while I was waiting. For a split second, I kind of thought that might have been it. I gave it my best, but it just wasn’t good enough,” Hinton said. “I didn’t want to come up short again in my last nationals. I was just praying as hard as I’ve ever prayed before to just get one more chance. I told myself that if I got one more chance, I was going to walk out of here an All-American. I did it, and I was just ready to get after it and be more aggressive with my throws after that.”

Hinton certainly made the most of her second chance while advancing to her first NCAA final either indoors or outdoors as a Lady Tiger. She finished in 16th place overall as a sophomore in 2012 and 14th place overall as a junior a season ago in 2013 in her two previous appearances in the women’s weight throw field at the NCAA Indoor Championships.

Hinton was not the only Lady Tiger to earn a spot in her first NCAA final as freshman Nataliyah Friar earned a ninth-place finish nationally in her NCAA Championships debut in the women’s long jump.

Like Hinton in the weight throw, Friar grabbed the ninth and final qualifying spot into the long jump final with her top jump of the day at 20-1 ¾ on her third attempt of the preliminary round. While she added a jump of 20-1 ½ in the fifth round, Friar was unable to move up from ninth spot in the standings as she came up just short of a scoring position in her first career appearance at the NCAA Championships.

TCU’s Lorraine Ugen added an NCAA Indoor title in the women’s long jump to the NCAA Outdoor crown she won a year ago with a winning jump of 22-1 on the night. Florida State’s Der’Renae Freeman trailed with the silver medal with her top jump of the day at 20-10, while Georgia’s Chanice Porter bagged the bronze medal with her best jump of 20-9 ¾ during the competition.

Friday’s opener at the NCAA Division I Indoor Track & Field Championships also featured qualifying races on the track as two LSU athletes earned their spot in finals to run during Saturday’s finale in Albuquerque.

Senior Jasmin Stowers is a national championship favorite in the women’s 60-meter hurdles after she sprinted to the fastest qualifying time of the evening at 7.98 seconds to win the first of two qualifying heats. Only a thousandth of a second separated Stowers (7.972) from UTEP’s Janice Jackson (7.973) in the heat as she took the tape with identical times of 7.98 run by the two hurdlers.

Stowers’ qualifying time of 7.98 is an altitude-adjusted personal best of 8.00 as she is inching ever closer to former NCAA Indoor champion Joyce Bates’ 14-year-old school record of 7.99 set during the 2000 season.

This year’s SEC Indoor champion and collegiate leader Kendra Harrison of Kentucky won the second qualifying heat with the third-fastest time of the day at 8.03, while other finals qualifiers in the 60 hurdles include the likes of Baylor’s Tiffani McReynolds (8.07), Oregon’s Sasha Wallace (8.08), Michigan’s Cindy Ofili (8.09), Arkansas State’s Sharika Nelvis (8.09) and Notre Dame’s Jade Barber (8.13).

Tiger junior Vernon Norwood also earned his spot in Saturday’s championship finals after he nabbed the eighth and final qualifying spot into the men’s 400-meter final while winning the second of four heats with a run of 46.18 in the preliminary round. The SEC Indoor bronze medalist entered the meet with a seasonal best of 45.39 that he set in his last 400-meter race in the SEC Indoor final two weeks ago.

This marks the second time in three seasons for an LSU Tiger to advance to the NCAA Indoor final in the 400 meters after former Tiger Caleb Williams was fifth nationally in Boise, Idaho, two years ago in 2012.

Rounding out Friday’s qualifying for the LSU Track & Field teams was senior Nikita Tracey, who finished in 13th place overall in the women’s 800 meters with her run of 2 minutes, 10.41 seconds in the first prelim heat.

“Both of our teams did what we needed them to do today to give us the best opportunity to come away from this meet with a couple of good finishes tomorrow,” said LSU head coach Dennis Shaver. “You’ve first of all have to congratulate Denise Hinton on what she was able to do today to go out as an All-American in her last NCAA Indoor Championships. She just competed well today all the way through her final throw to put those points on the board for our team. We needed that kind of a performance from her today.

“We’ve also got several good opportunities to score on the track tomorrow with what we did in qualifying today. We’re looking forward to an exciting finish to the meet for both our men’s and women’s teams.”

Saturday’s finale starts for the Tigers and Lady Tigers at 7 p.m. CDT as senior Lynnika Pitts competes in the women’s triple jump for the third-straight year at the NCAA Division I Indoor Track & Field Championships. The first final on the track will be the women’s 60-meter hurdles at 7:30 p.m. as Stowers looks to go out as a national champion in her final race indoors as a Lady Tiger.

Fans can watch the Tigers and Lady Tigers in action on Saturday at the 2014 NCAA Division I Indoor Track & Field Championships as ESPN3.com will feature live streaming video of the meet starting at 6:50 p.m. CDT on its website at http://es.pn/O2JxJu. Flash Results will also provide the live results for the final day of the 2014 indoor season as fans can follow along by going online at www.flashresults.com.