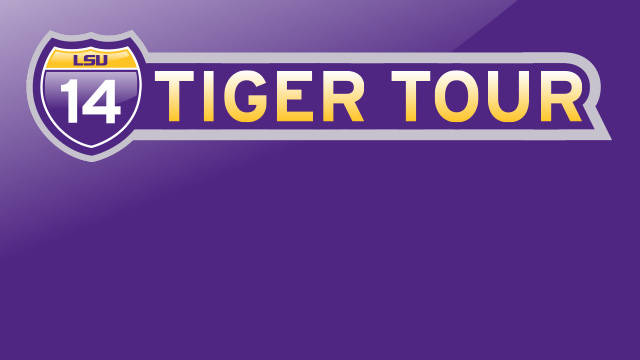 The eight tour stops have been condensed into the months of April and May again this year with the last event coming on Tuesday, May 20 in Lafayette.

Miles is scheduled to speak at six of the eight sites, which include Shreveport/Bossier, Monroe, Houma, Houston, Alexandria and Lafayette. Jones, who is winding down his second season as LSU’s basketball coach, will make appearances at six stops this spring.

Miles and Jones will be joined on the tour by Alleva, women’s basketball coach Nikki Caldwell, and gymnastics coach D-D Breaux. LSU defensive coordinator John Chavis will speak at the Baton Rouge event on May 7, while offensive coordinator Cam Cameron will headline the New Orleans stop on May 18. LSU running backs coach and recruiting coordinator Frank Wilson will appear in both Baton Rouge and New Orleans.

Other features on this year’s tour include BancorpSouth Photo Area; the L’auberge Baton Rouge Trivia Challenge where fans can win prize packs; and the popular TAF Silent Auction. There will be LSU merchandise on sale at the events courtesy of the LSU Alumni Store.