Blogging from the Berm: A.J. Andrews 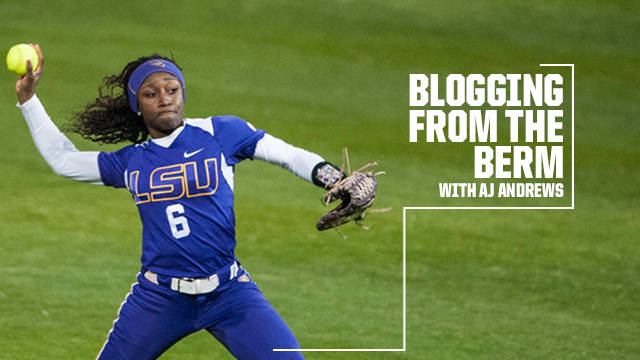 BATON ROUGE, La – The inaugural edition of the Blogging from the Berm series kicks off with junior outfielder A.J. Andrews.

The All-American Andrews, a Florida native, talks a little bit about preparing for the big weekend SEC series against No. 1 Florida, and the focus it takes to be on top of your game with so much on the line every weekend.

A.J. Andrews here coming at you with the first installment of the Blogging From the Berm series this year. It is an honor and very exciting to have been chosen to write the first blog entry. I get to set the tone for the rest of the blogs, and honestly, I think it is going to be really hard to beat me. So good luck to the rest of my teammates as the year goes on!

It is going to be a FABULOUS weekend at Tiger Park. As we enter into SEC play, we just know as athletes that the competition is going to be good across all of the teams in the conference. You can never let up, or go into a single game not playing your best or putting forth your best effort to win. It might be easier to rest on your laurels when playing non-conference games, but I think it is an impossible thing to do when you’re competing against any team in the SEC.

We have a big series on our hands this weekend for multiple reasons. It’s going to be big due to the fact that it is our first home SEC series and because Florida is the No. 1 ranked team in the country right now. We know that the intensity and excitement level are much higher at Tiger Park heading into any game against an SEC opponent. I think you are going to get a great series and a good show from two tough, competitive teams.

The conference portion of our season is slightly different than the four weekends of tournament play that lead off the season. The mentality going in playing one team is more of a concentrated focus, and we know that every pitch, every at-bat, every moment counts against SEC teams. When you play one team, you have one singular focus on the opponent and the athletes on that roster, and you can really continue to work on that focus during the week and throughout the weekend.

We have checked the weather, and it is going to be super nice outside this weekend. There are no excuses to miss the action. We are playing the No. 1 team in the nation; we have some nice weather; we’ll be wearing your favorite colors (Purple & Gold, of course). I can’t think of a better place to be on a Friday, Saturday and Sunday than Tiger Park!

PS: Don’t forget to wear GOLD on Friday for our Gold Game!!