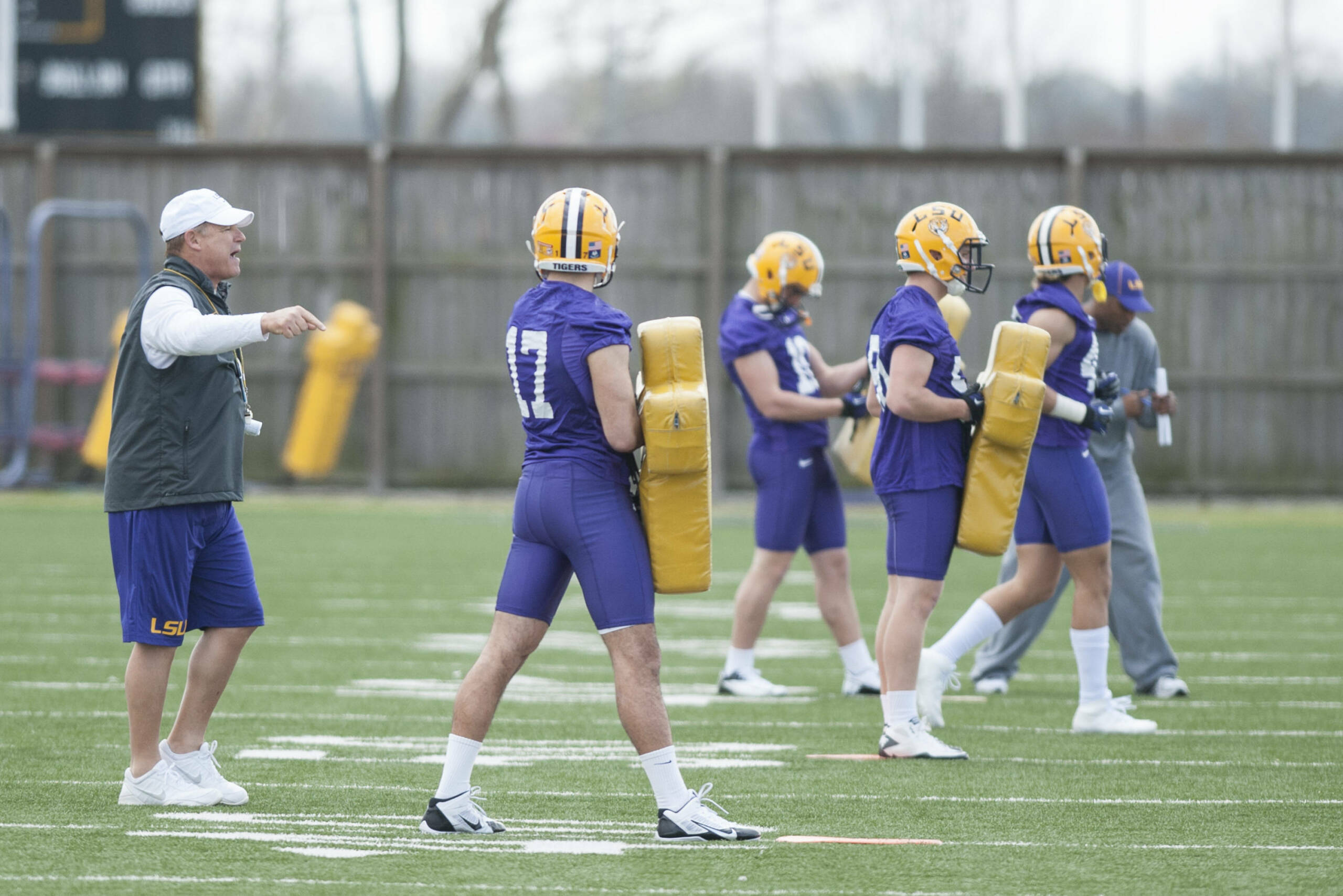 BATON ROUGE – LSU opened spring practice on Saturday with a couple new faces on the coaching staff along with several new faces looking to make an impression over the next month during which time the Tigers will workout a total of 15 times.

Saturday’s practice, which was held under perfect conditions and a temperature near 70 degrees at the Charles McClendon Practice Facility, had the Tigers going in shorts and helmets. LSU will practice in shorts and helmets against on Monday before adding shoulder pads later in the week. LSU is scheduled to scrimmage three times this spring with the first taking place on Saturday, March 22.

One of the more intriguing position battles this spring is that of the quarterback position, a spot where the Tiger return only one player with any experience – sophomore Anthony Jennings. Jennings filled in for an injured Zach Mettenberger and led the Tigers to a last-minute win over Arkansas in the regular-season finale and then started LSU’s win over Iowa in the Outback Bowl.

Jennings is joined at the position by true freshman and early enrollee Brandon Harris along with redshirt freshman Hayden Rettig. Miles said he wants to use the spring as an opportunity for each quarterback to gain experience, while also competing for the starting job.

“The older guys obviously know cadence, so there’s some comfort there,” Miles said of the advantage Jennings and Rettig have over Harris. “We want to allow a quality competitive environment for Brandon Harris and the other quarterbacks. We have to bring Brandon up to speed to get comfortable with the offense then see who’s best.

“I felt both quarterbacks, Brandon Harris and Anthony Jennings, have gotten stronger and more capable. Brandon, in his short amount of time here, has gained some weight and strengths and looks a little bit better. Hayden Rettig‘s lost some weight, looks better, and he had a nice practice today.”

Miles also said he felt new offensive line coach Jeff Grimes and special teams coordinator and defensive assistant Bradley Dale Peveto made a smooth transition into their first practice with the Tigers. Grimes, who joined the staff in January, returned to campus on Saturday morning after missing time to be with his family after the unexpected death of his father last week.

“I enjoyed both new coaches,” Miles said. “I think Jeff Grimes really stepped in and really performed at practice like you’re supposed to. He had a comfort. You can tell that guys are going to him very, very well. He had a difficult time with losing his father. He went home and was with his family and showed right back up and probably enjoyed being able to get back onto the field. He did a great job.”

Miles noted that the Tigers are also using the spring to find a starter at right guard to replace the departed Trai Turner, who opted to leave school early for the NFL Draft.

“Playing the best player is obviously the key,” Miles said of the right guard position. “We’re looking at Evan Washington, Ethan Pocic and Hoko Fanaika. We’ll have to see how that all goes. Right now Evan is playing there.”

Other position changes of note for the Tigers on day one of spring practice include: Rob Bolden moving from quarterback to wide receiver; Jalen Mills moving from cornerback to safety; Lamar Louis moving from middle linebacker to outside linebacker; and Kwon Alexander flipping from sam linebacker spot to will linebacker.

LSU returns to practice on Monday in what will be the first of four workouts next week. LSU will also practice on Tuesday, Thursday and Saturday next week.