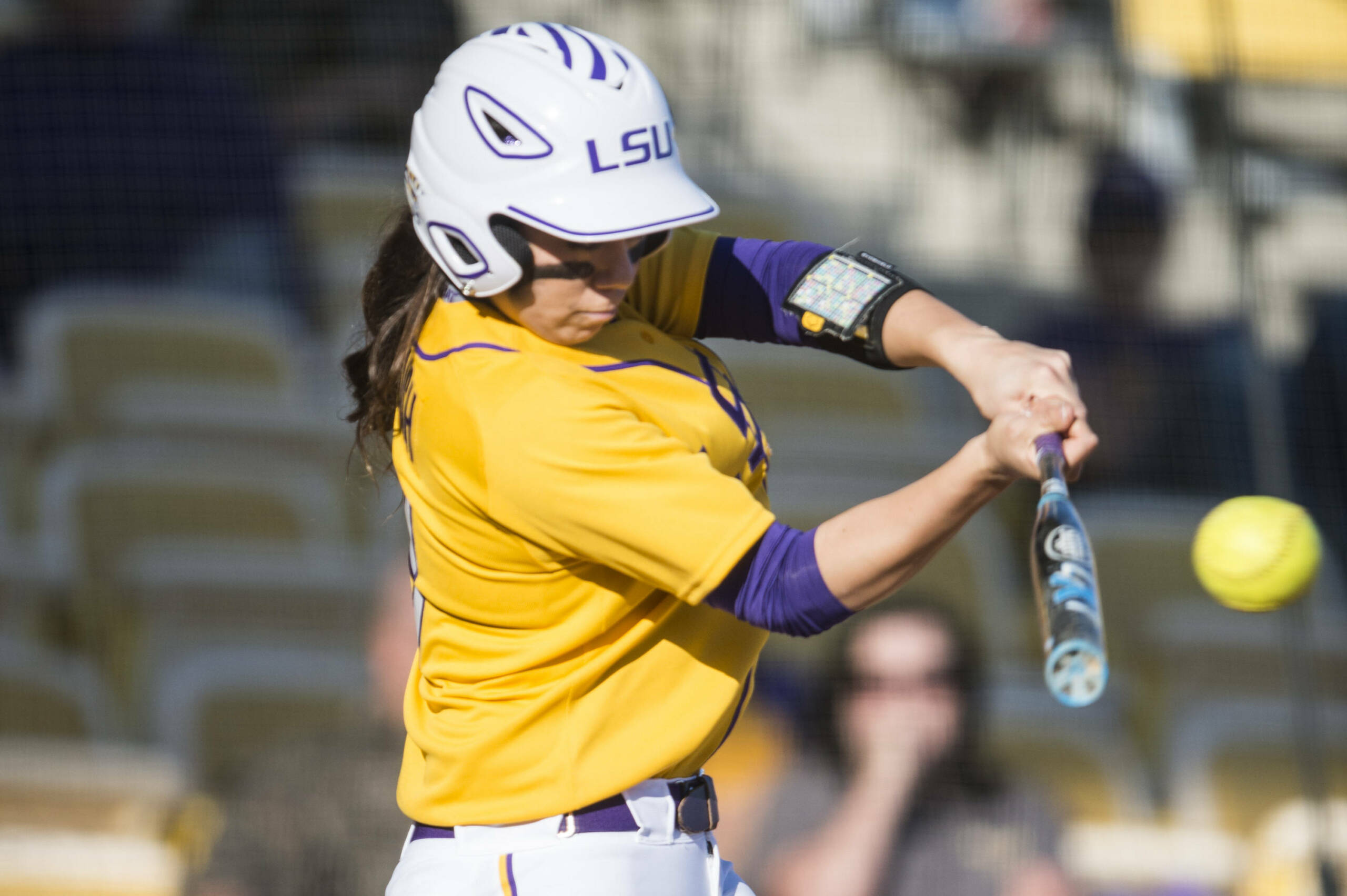 AUBURN, Ala. – Down by two runs, the 24th-ranked LSU softball team nearly put together a two-out rally in the top of the seventh inning and mount a thrilling comeback, but the Tiger bats ran out of steam as Auburn got four runs over the course of two innings with the game tied at two earlier in the day to pull away and win, 6-4.

After getting some big hits the night before, LSU (17-7, 1-1) struck often getting two home runs from Sahvanna Jaquish and one from Bianka Bell, but Auburn (18-4-1, 1-1 SEC) struck the biggest blow getting a three-run home run in the bottom of the fourth to cap a four-run swing over the third and fourth to take a 6-2 lead even as LSU outhit Auburn 10-4 by the end of the contest.

“They fought hard and I think it was a situation where we beat ourselves with the free passes that we allowed throughout the game,” head softball coach Beth Torina said. “Auburn definitely gets some credit for being disciplined at the plate. Ultimately, we have to attack hitters a little bit better.”

Jaquish became the first player since Tammy Wray against South Carolina last season to hit two out of the park in the same game, as she led LSU going 3-for-4 with two RBI and two runs scored. She now has six on the year and would have been in the lead all alone if not for Bell’s shot before in the same inning as the shortstop went 2-for-3 with a double, two RBI and a run scored.

“It’s unfortunate that we waste a performance like that, and a day where we hit three home runs and put 10 hits on the board and we still weren’t able to find a way to win,” Torina said. “(Jaquish) was fantastic today.”

A.J. Andrews, Sandra Simmons, Kellsi Kloss, Allison Falcon and Bailey Landry had the other four hits for LSU on the afternoon.

Ashley Czechner fell to 5-5 on the season in the loss, allowing six runs on four hits with five walks and two strikeouts in 3.1 innings of work. Czechner threw 87 pitches and was relieved in favor of Kelsee Selman who pitched the final 2.2 innings giving up no hits with two walks and a strikeout, as the freshman has not given up a run in her last 18.2 innings in the circle.

Auburn’s Kasey Cooper was the only player to finish with multiple hits for the Tigers, as she went 2-for-4 with the three-run jack, while Branndi Melero had her only hit come on the home run to give Auburn the lead back as each tallied their fifth home runs of the season on Saturday.

Marcy Harper may have earned the win but got lit up doing so, as she pitched five innings and gave up all four LSU runs on eight hits with six strikeouts and two walks to move to 9-0 on the season. Lexi Davis, Friday night’s starting pitcher, earned her second save of the season as she pitched the final two giving up two hits with four strikeouts.

After Auburn struck first the day before, LSU didn’t want to give the home side the chance to repeat that feat on Saturday as Andrews singled to right field to lead off the game. After advancing to second on a grounder to third and a strikeout, Bell connected on a screamer to right center to score the game’s first run to put the team up 1-0 early.

Czechner ran into trouble in the first Auburn turn at bat in the bottom half of the inning as two walks and a bunt single loaded the bases with no outs. Another walk plated the first run to knot the game at 1-1, with a sacrifice fly to left field scoring the runner at third to put Auburn up 2-1 with just one out. The righty struck out the next batter looking and got the next to pop up to Bell at short to end the inning.

In the very first at-bat of the second, Jaquish took the 1-1 pitch and hit a towering shot that skated down the left field line and stayed fair clearing the fence for the solo shot to tie the game at 2-2. LSU was able to get two on base with walks to Tammy Wray and Andrews, but strikeouts before, in between and after the free bases ended the inning.

Melero connected for Auburn’s first home run in the bottom half of the third inning to give the Tigers a 3-2 lead, as Cooper came back in the very next inning and drilled one deep to left field with two on to push the Auburn lead to 6-2 as Czechner exited and Selman came on in relief.

With the deficit now standing at four runs, a pop up by Simmons gave LSU its first out of the fifth. Bell helped cut that Auburn lead with one swing of the bat as she drilled a shot over the fence in center to make it 6-3. After a grounder to short, Jaquish took a 3-1 count and laced one to right center that cleared the fence to make it 6-4 for the final LSU run of the inning.

After back-to-back outs in the seventh, Kloss singled through the middle to reach first. Alex Boulet came on to pinch run for the designated player which proved to be a good move as Jaquish earned her third hit as she earned a one-hopper off of the wall in left center to advance Boulet to third and put runners at the corners. Simone Heyward came in to run for the catcher, as LSU started to get some life at the plate, but a diving catch at short by Auburn on the next play ended the game.

“Even though we got 10 hits today their pitchers struck us out 10 times, so I think we need to have better at bats in timely situations,” Torina said. “We have to be stronger on the mound and not give so many free passes to their offense.”

The rubber match of the series is set for a 1 p.m. first pitch at Jane B. Moore Field in Auburn.

On the tough loss, but battling through the end…
“They fought hard and I think it was a situation where we beat ourselves with the free passes that we allowed throughout the game. Auburn definitely gets some credit for being disciplined at the plate. Ultimately, we have to attack hitters a little bit better.”

On Sahvanna Jaquish‘s 3-for-4 day with two home runs…
“(Jaquish) had a great day. It’s unfortunate that we waste a performance like that, and a day where we hit three home runs and put 10 hits on the board and we still weren’t able to find a way to win. (Jaquish) was fantastic today.

On what the team will need to do in game three of the series on Sunday…
“Even though we got 10 hits today their pitchers struck us out 10 times, so I think we need to have better at bats in timely situations. We have to be stronger on the mound and not give so many free passes to their offense.”