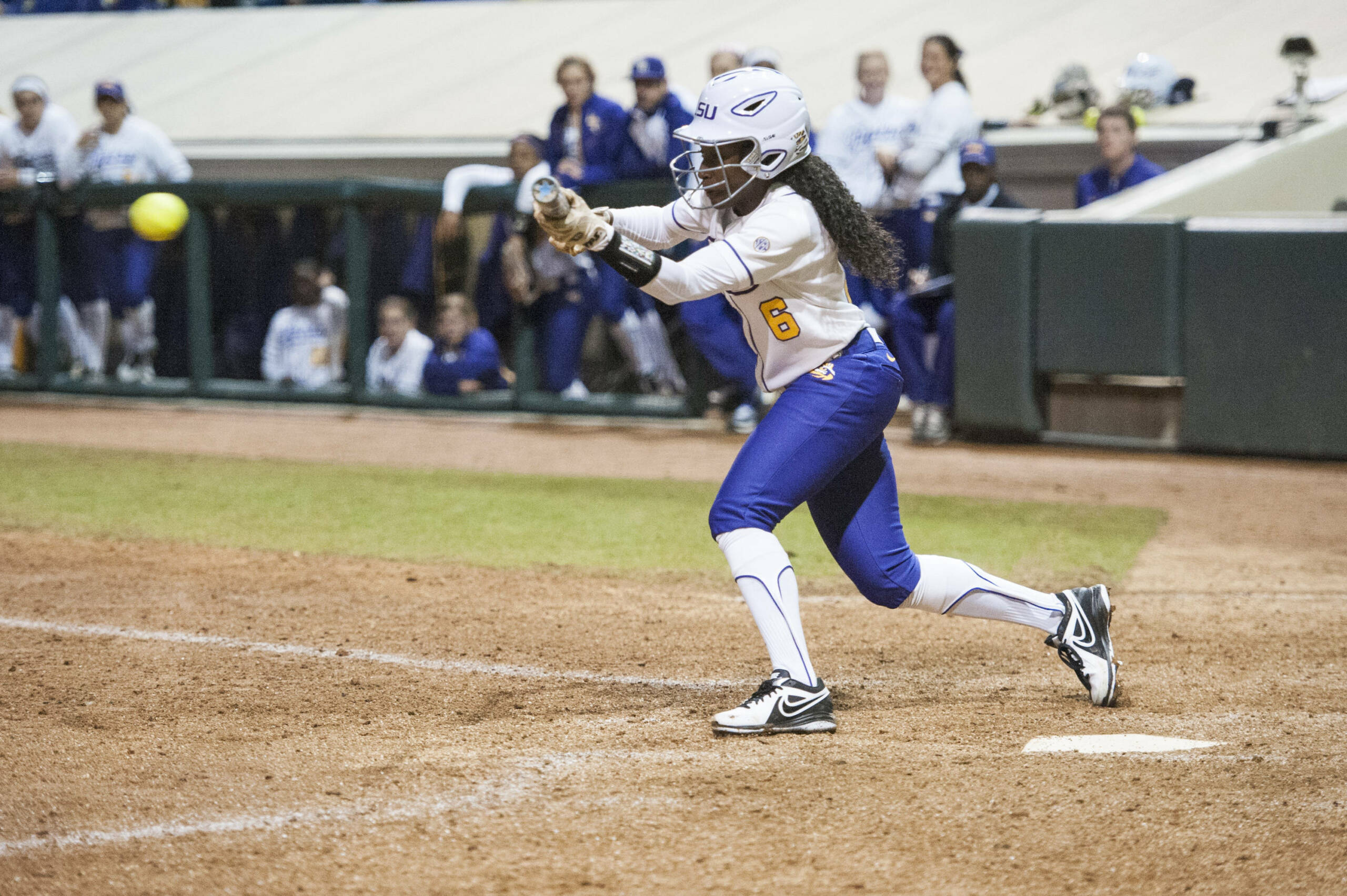 AUBURN, Ala. – In the Southeastern Conference opener for No. 24 LSU, the Tigers struggled to get anything going offensively for much of the game and trailed by one for three innings until a three-run sixth broke the game open as LSU scored four unanswered runs in the final two innings to defeat the Auburn Tigers 4-1 at Jane B. Moore Field in Alabama.

After getting just four balls out of the infield through five innings, the LSU (17-6, 1-0 SEC) bats came alive and pounded out three hits in the final two frames of the game, paced by A.J. Andrews and her 3-for-4 night with a double, two stolen bases, an RBI and run scored. In the three-run sixth Andrews drove in the game-tying run then scored on a swift play to give the team its first lead of the evening.

“A.J. had a great night,” head softball coach Beth Torina said. “She just does so many things to change the game. We go as A.J. Andrews goes, so she did a great job of getting us on the board.”

Earning her sixth consecutive win in as many starts, freshman Baylee Corbello gave up a hit in the second and another in the fifth and did not give up anything else for the rest of the game as she earned the complete-game victory by holding Auburn (17-4-1, 0-1) to one run with eight strikeouts. Corbello did walk six, but never walked batters back-to-back and the Tigers worked out of three big jams in the first, third and fifth to keep Auburn from scoring more.

“Corbello was fantastic tonight, and she did a great job of giving us a chance and keeping us in the ballgame,” Torina said. “She had really good stuff tonight and was able to get eight strikeouts. What a nice performance from a freshman in her first SEC game.”

Auburn’s McKenzie Kilpatrick had one of the team’s two hits on the night, connecting for her fifth home run of the season for the only run for the Tigers on the night in the second, while Morgan Estell had the other. Starting pitcher Lexi Davis went the distance, giving up all four runs, three earned, on five hits with four strikeouts and no walks.

Corbello was cruising and mowing down Auburn batters until she left an 0-2 pitch over the plate for Kilpatrick who drilled a shot over the high fence out in left field to give Auburn its first hit of the game and the lead 1-0.

Auburn came back in the bottom of the fifth and got a leadoff walk and a double to left to put two into scoring position with no outs. With two runners in prime scoring position, a grounder to Falcon at second held the runners at bay, while a swinging strikeout gave Auburn two outs. A deep fly to Landry in right ended another Auburn scoring threat.

Landry got the first hit out of the infield for LSU as she opened the sixth with a double over the head of the left fielder. Andrews connected for her third hit of the game as she drilled a shot to the gap in left center to drive in the right fielder and knot the game at 1-1. A sacrifice bunt by Jacee Blades advanced Andrews to third, as she would score on the next play as a fielder’s choice with Simmons at the plate allowed the centerfielder to slide in under the tag and score to give LSU a 2-1 lead.

Simmons moved over to second after a grounder to give LSU two outs, but the team wasn’t done scoring as Kellsi Kloss hit a screamer on the dirt that got just past the shortstop on the error to allow Simmons to score to make it 3-1.

In the very next frame for LSU, Falcon got a hold of one and roped it towards the right field line as she hustled around second to slide into third for the triple. Corbello aided her own cause in her at-bat as she drove one to deep center scoring Falcon to give LSU the 4-1 advantage with half an inning left to play.

“It’s nice to see our kids able to show some fight, and be able to make adjustments and continue to battle over the course of seven innings,” Torina said.

Game two of the series is set for a 1 p.m. first pitch at Jane B. Moore Field on Saturday.

On the performance of the team on the night…
“It was definitely a good win for our team, and great way to start off SEC play on the right foot tonight. It’s a big deal every chance you get in this league, and to get any win in the SEC is huge. I think our team did a good job of making adjustments throughout the game. They changed from at-bat to at-bat and did a really good job of finding a way to win.”

On the play of A.J. Andrews…
“A.J. had a great night. 3-for-4 and had a great slide at the plate. She just does so many things to change the game. We go as A.J. Andrews goes, so she did a great job of getting us on the board.”

On the complete-game effort from Baylee Corbello…
“Corbello was fantastic tonight and she did a great job of giving us a chance and keeping us in the ballgame. She had really good stuff tonight and was able to get eight strikeouts. What a nice performance from a freshman in her first SEC game.”

On the team and their second comeback win in as many games…
“It’s nice to see our kids able to show some fight, and be able to make adjustments and continue to battle over the course of seven innings.”