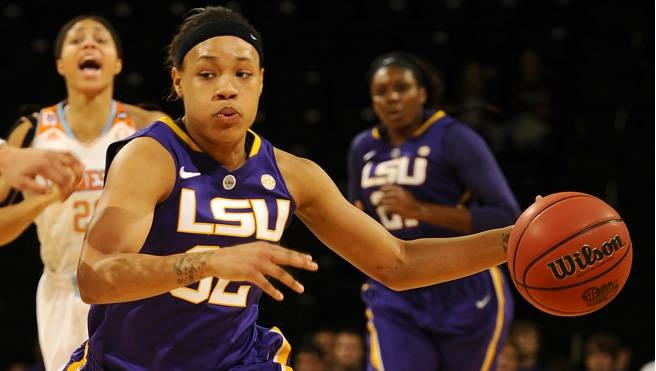 DULUTH, Ga. – Theresa Plaisance poured in 21 points, but the LSU women’s basketball team was unable to fend off No. 6 Tennessee as the Lady Vols used a 19-point run midway through the second half to claim the rubber match of the season series, 77-65, Friday in the quarterfinal round of the SEC Tournament held at the Arena of Gwinnett Center.

LSU (19-12) will await an at-large berth to the NCAA Tournament, while the Lady Vols (25-5) advance to take on the winner of the Texas A&M and Auburn contest in Saturday’s second semifinal.

“I’m extremely proud to be the coach of these young ladies,” head coach Nikki Caldwell said. “This group has come a long way and they have shown that they are capable. I thought that it takes a lot of courage.  I think it does take a lot of courage to come into an environment like this – to be able to come out and display what they did especially in the first half. A lot of credit to Tennessee for executing their game plan, which is to get transition baskets, which they did that. Then, obviously their ability to get on the offensive glass was a key. We will move forward from this game.  But again, I’m extremely proud of this group.”

The 21 points for Plaisance marked her sixth 20-point effort of the season, all against SEC opponents. She tallied 14 points and converted on 6-of-10 from the floor during the first half. The New Orleans native ran her streak to 21 consecutive games into double figures.

Danielle Ballard turned in a solid all-around performance with 15 points, eight rebounds and seven assists over her 30 minutes of action. She has reached double figures in five of her last eight outings.

Jeanne Kenney tacked on 13 points, four rebounds and three assists. She drilled a trio of three-pointers to bring her season total to 70 which is seventh on LSU’s all-time single season list.

Tennessee received double figures from all five members of its starting unit which accounted for 69 of the team’s 77 points. The Lady Vols brought their board play and recorded 21 offensive rebounds en route to a 48-30 rebounding advantage. It also enabled the Lady Vols to score 52 of the game’s 70 points in the paint.

Isabelle Harrison came away with 21 points and 12 rebounds. She knocked down 10-fof-15 from the floor in her 27 minutes of court time. Bashaara Graves and Meighan Simmons chipped in 14 points apiece for the Lady Vols. Courtesy of Harden’s suffocating defense, Simmons had to work for her 14 points and went 5-of-19 shooting.

LSU came out clicking on all cylinders and buried eight of its first 10 field goal attempts to build a 22-8 advantage at the 13:42 mark of the opening half. The Lady Tigers capped the flurry with a trio of treys from Harden and consecutive Kenney triples.

LSU took its largest lead at 27-12 with 9:29 remaining after a Plaisance jumper and another Kenney three-ball.

With the Lady Tigers ahead 34-22 at the under four-minute mark, Tennessee pieced together six consecutive points to slice the LSU lead to 34-28 heading into halftime.

The Lady Vols continued their charge out of the locker room and scored 15 of the first 24 points to knot the tally at 43-43 with 12:47 left.

LSU answered back with five quick points from Plaisance inside the 34-second span to regain a 48-43 lead at the 11:54 mark. It was Plaisance final points of the contest. The Lady Tigers maintained a 55-51 advantage with 8:32 on the clock after two Kenney free throws.

Tennessee found its rhythm and ripped off 19 straight points over the next 5:07. The trio of Graves, Harrison and Simmons combined for each of the 19 points. A Harrison jumper followed by a Simmons traditional three-point play gave the Lady Vols the lead for good.

Ballard tallied eight of LSU’s final 10 points down the stretch, but Tennessee maintained its double digit advantage to close out the 77-65 decision on the strength off a 12-for-13 mark at the free throw line.

“We talk about even when adversity hits, your true character will be revealed,” Caldwell said. “Our kids have been great teammates.  They’ve invested in each other.  Theresa and Jeanne and Shanece, they know it’s their last go around.  They’re living in the moment.  You can tell. I respect them tremendously when they’re cheering for their teammates when they’re on the bench or maybe they don’t have a good game or when they’re in foul trouble.  It doesn’t stop them being involved in this team.”

The announcement of the NCAA Field of 64 is set for Monday, March 17 at 6 p.m. CT, and it will be televised by ESPN along with www.WatchESPN.com. The Maravich Center will play host to the first two rounds of the tournament on March 23 and 25.

The LSU Sports Radio Network will broadcast every LSU postseason game on Talk 107.3 FM in Baton Rouge and inside the Geaux Zone for subscribers at www.LSUsports.net/live.

All times Central and subject to change.